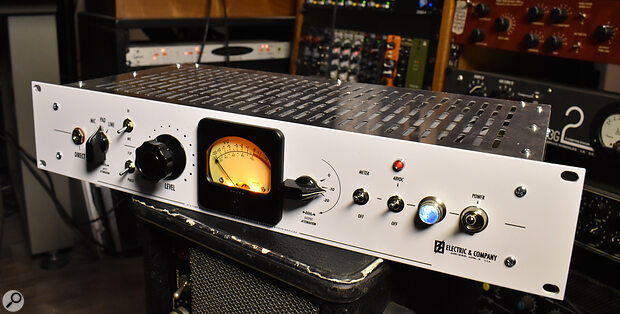 Electric & Company, a boutique audio company based in Austin, Texas, are the commercial vehicle for Mattie Smith, who builds and restores vintage microphone preamplifiers. He’s particularly well known for reconditioning old Ampex equipment, and his EC3 is marketed as a “deluxe production version of the classic Ampex 351 amplifier circuit” that offers “loads of attitude and tube coloration without apology”. The amplifier circuit in question is taken from the Ampex Model 350 magnetic tape recorder, which was originally released in the 1950s. These preamps are highly sought‑after and, at the time of writing, units that have been detached from the tape mechanism and suitably reconditioned can fetch anywhere between two and four thousand dollars.

Electric & Company have taken this amplifier circuit design as the starting point of the EC3, and housed the resulting device in a 2U rackmount chassis. It’s not a straight clone, though: they’ve added many bells and whistles, so as to make this a very versatile standalone mic preamp. Alongside the Ampex 351 circuit, the EC3 uses 12AX7 valves for the first gain stage and a 12AU7 in the output stage, along with Jensen input and Cinemag output transformers.

The device seems beautifully built and has a solid feel.

The device seems beautifully built and has a solid feel. I love the look too: its faceplate is loaded with nice, big, retro‑styled knobs, a VU meter, and throw switches that give a satisfying click. The controls are nicely laid out around the large VU meter and an output attenuator switch (0, ‑10 and ‑20 dB options) allows the input stage to be pushed into saturation without the output levels getting out of control.

The EC3 is hard to fault: while it certainly has its own sound, it seemed to shine on everything I threw at it, and the 70dB of available gain is ample for pretty much all studio applications. On miked bass guitar amps and kick drums, I found it could handle plenty of low‑end energy. On drums more generally, I found I could dial in some lovely colour, from subtle saturation to full‑on crunch; perfect for fattening up a room mic. The EC3 was particularly great on vocals, though. The sound is unapologetically characterful, but it softens thinner voices nicely and there’s so much headroom — I’d often glance at the meter to see it pinned, while the sound itself remained clear and unclipped, just saturating in a very pleasing way.

Having an instrument input jack on the front of a mic pre is always convenient, and this one’s perfect for adding instant tube colour and saturation on bass guitars; it proved very useful on some busy sessions, helping me achieve a lush bass sound without an amp. I’ve found it great for quickly thickening up analogue synths too.

Having an instrument input jack on the front of a mic pre is always convenient, and this one’s perfect for adding instant tube colour and saturation on bass guitars...

To sum up, this mic preamp is a great all‑rounder: there’s bags of gain and it can work well on all types of source, including instruments plugged into the DI socket. It has a big, coloured sound and breaks up really pleasantly, to deliver anything from a smooth tube compression/saturation to, courtesy of the output pads, overloaded but delicious distortion.

The revered Ampex 351 sound, repackaged, with less noise and more control for less than half the price of a reconditioned Ampex preamp. What’s not to like?