The Art And Science Of Surround And Stereo Recording

The Art and Science of Surround and Stereo Recording is a mighty 400‑page tome divided into 11 chapters but, while it is necessarily technically detailed and academic in parts, I found it very readable and easy to follow throughout, learning much along the way. Its author Edwin Pfanzagl‑Cordone is Head of Sound at the Acoustics Department of the Salzburg Festival of classical music in Austria, and has considerable practical experience of both studio recording and live sound. He graduated with a degree in electronic engineering and information technology from TGM in Vienna in 1988, and then as a Tonmeister from the University of Music and Performing Arts in Vienna in 1991. He also completed an MA in audio production in 2000, and gained a PhD in musical acoustics and psychoacoustics in 2011. 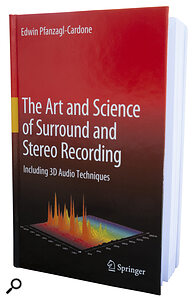 There’s no shortage of books discussing the science and practice of stereo and multichannel recording but Pfanzagl‑Cardone’s approach to this complex topic is of unique interest because of his inclusion of quantitative data obtained by a new measurement technique of his own devising (first described at an AES convention in 2002). His method evaluates the degree of signal correlation between the channels of different microphone arrays in specific relation to frequency. This novel data is claimed to provide a reliable means of assessing the sense of spaciousness afforded by different mic techniques — something which has been shown greatly to affect the enjoyment of recordings, and is of particular importance for the various surround‑sound and 3D formats.

The two opening chapters explore the human mechanisms for spatial hearing and the meaning of correlation and coherence, and both provide a solid grounding for what follows. The next three describe the technical parameters of many established stereo and surround microphone arrays and dummy‑head techniques, as well as some named variations which were new to me.

Informative and educational though the early chapters are, the real meat comes in the following five chapters, which describe the extensive, precisely controlled listening tests and subsequent detailed analysis carried out by the author and his associates to evaluate the properties of different microphone arrays. This section’s conclusion finds in favour of a stereo array based on a combined ORTF/Spaced AB technique, but it’s fascinating to understand the underlying physics in support of its success. Then, drawing the book to a close is a chapter which recounts the beginnings of stereo recording, before evaluating some of the most popular commercial recording techniques which remain highly regarded, such as Decca’s infamous tree and Mercury’s ‘Living Presence’ configurations.

For anyone interested in the science and engineering of stereo and surround recording techniques Pfanzagl‑Cardone’s book makes fascinating reading, and provides a fresh insight...

For anyone interested in the science and engineering of stereo and surround recording techniques Pfanzagl‑Cardone’s book makes fascinating reading, and provides a fresh insight into their relative strengths and weakness. Unfortunately, the quality of diagrams and images is variable, and a few are rendered completely unrecognisable, meaningless or even unintelligible, which is disappointing when so much information is being conveyed pictorially. That said, I found the book very educational and informative, but also enjoyable and fascinating to read, and it has greatly extended my understanding and appreciation of stereo and surround microphone techniques.