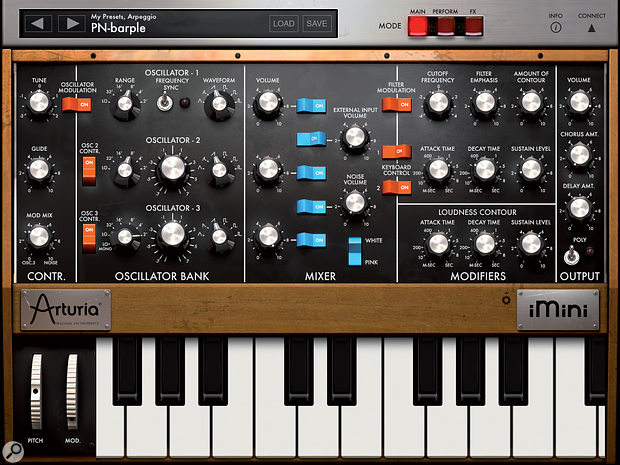 It was surely only a matter of time before an iOS Minimoog appeared, and it's no surprise that Arturia are the company who've made it. It's called the iMini and its main page is a representation of the well-loved Model D panel, but with enhancements such as oscillator sync and (limited) polyphony.

A second page contains an arpeggiator and twin X/Y pads, for Kaoss-like control over parameters of your choice, while the sparsely-populated FX page reveals just two effects: chorus and delay. Fortunately, they're all you'll need to play iMini straight from the box. 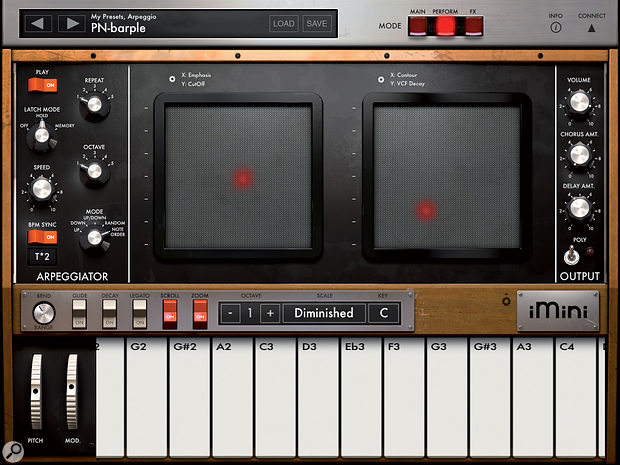 Where to start? Well, the obvious place is with the factory presets, because over 500 are supplied, with legends such as Geoff Downes and Klaus Schulze contributing. It's an unexpectedly diverse resource, especially when you consider the interface involved, although the patches are compatible with Arturia's Mini V, so it's possible that some originated there. Regardless, that handful of knobs and switches leads to a wealth of tones that cry 'Minimoog' again and again.

Arturia have mostly stayed faithful to tradition, but there are deviations. For example, a variable pulse-width control has been snuck in. It's 'revealed' by resting a finger on the Waveform selector until a knob appears. There's a minor omission too: the Minimoog's overload light. To create a feedback loop, you must first flip the External Input switch to its halfway position. This isn't quite the overdrive we know and love, but it's worth having all the same. Alternatively, iMini is compatible with Tabletop (the free audio-piping app), which is another means of re-routing audio, or sending it to other Tabletop effects. However, I found performance under Tabletop to be sluggish and user patches didn't show up — or mine didn't, at least. Actually, latency was noticeable even when running stand-alone, and became more obvious when I attempted to harness iMini's power for tight sequencing work. With luck, your sequencer will have a means of compensating for the delay (around 27ms on my iPad 2). Core MIDI and Wist are present and all knobs are freely assignable. Oh, and you're going to want to play it from a real keyboard!

On a Model D, the range of the tuning knob is extended when you switch an oscillator to its 'Lo' range. It's baffling, therefore, that Arturia chose not to copy that behaviour. Instead, to adjust modulation speed you hold down VCO3's tuning control until a coarse tuning knob materialises next to it. The extra knob sets the modulation rate. Another oddity is the hiding of the glide and decay switches. These are discovered beneath a panel that flips over at a touch. The same flipping panel gives more goodies too: keyboard transposition, pitch-bend range and scale selection. Back in prog-rock days, a Minimoog player might have been judged on his ability to rattle off an Arabian scale at the drop of a semiquaver, but if you're using the on-screen keyboard, you might be glad of preset scales to steer you past wrong notes.

Perhaps the least successful innovation is poly mode. It delivers three notes at best, but occasionally distorts. If you're partial to high notes and long releases, 'occasionally' could become 'regularly'. Even so, when used with care, this little app can sound tantalisingly like a polyphonic Minimoog. Maybe the occasional glitches will be modelling fodder for the future. Maybe I need a more powerful iPad!

Frankly, even if iMini wasn't quite so reminiscent of a classic synth, it would be worth grabbing for its bottom end. There are some truly monstrous basses to be had, even from a single triangle wave. Yes, its digital nature can show through, and those rich, Moogy filter sweeps can be slightly steppy. But let's get things into perspective: this is a warm and natural-sounding Minimoog impersonator and it costs a few quid! It would be a serious pedant who gave it anything but a glowing thumbs-up.