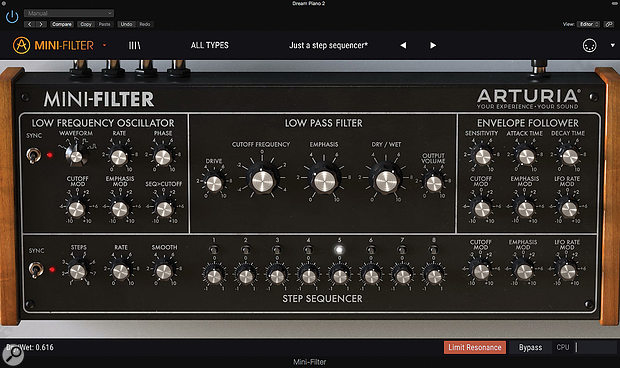 Billed as “three filters you’ll actually use”, Arturia’s plug‑in trilogy is modelled on the filter sections found in three classic synths. Comprehensive control and modulation options allow them to be applied to any audio track, with tempo‑sync’ed operation where needed. A number of useful and easily editable presets are included with each to show off its capabilities, and a Wet/Dry control allows the filters to be used for parallel processing.

All three have distinctive user interfaces that are set out in a clear, logical way, and which provide visual clues as to their origins. In addition to the possibilities opened up by the onboard modulation sources and DAW parameter automation, it is also possible to manipulate the various panel controls using MIDI control where the host DAW permits: click on a control in assign mode, and a small window drops down where you can fill in the desired MIDI source.

Naturally, the collection includes an emulation of the classic 24dB/octave Moog ‘ladder’ resonant low‑pass filter, which is paired with a multi‑waveform LFO, an envelope follower and a tempo‑sync’able, analogue‑style step sequencer offering up to eight steps, with variable smoothing. Modulation routing options allow control over filter cutoff, resonance and LFO rate. The control layout is clear and intuitive, as each modulation section has dedicated amount controls for cutoff and emphasis modulation. The LFO also has a sequencer cutoff control, and both the envelope follower and the sequencer have LFO Rate Mod controls. 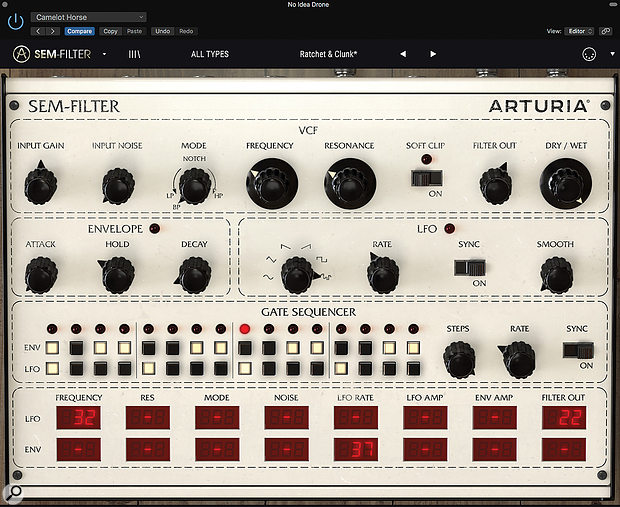 The SEM‑Filter plug‑in features an emulation of Tom Oberheim’s state‑variable filter, teamed with a straightforward but versatile modulation matrix, gate sequencer and a choice of modulation sources including an Envelope section and an LFO section. The sync’able Gate Sequencer section can run up to 16 steps, each of which can be used to modulate either the Envelope, the six‑waveform LFO or both, using straightforward buttons.

The Modulation Grid at the bottom of the screen enables the LFO, which also has a smoothing control, and the Envelope to be routed to a choice of modulation destinations: Cutoff, Resonance, Filter Mode, Noise Source, LFO (rate and amplitude), Envelope amplitude and Filter Output. A noise source can be mixed into the filter to create a range of effects from wind to percussion, and there’s a soft clipper for warming things up. 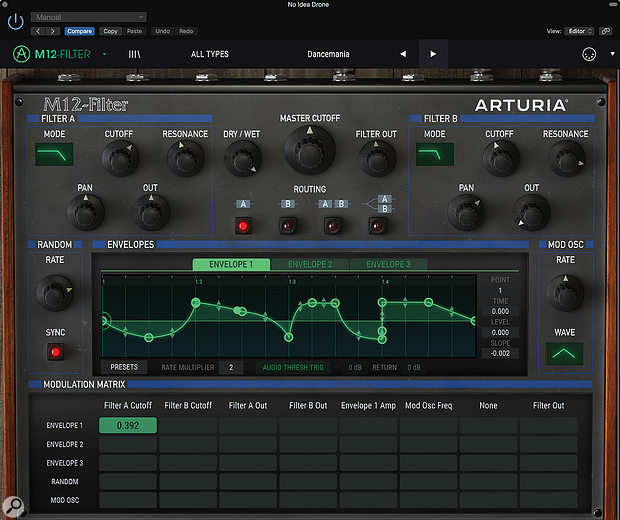 The M12‑Filter again tips a wink to Tom Oberheim, this time taking its cues from the Matrix 12 analogue polysynth. This plug‑in models two of that instrument’s analogue filters with further filter processing, modulation envelopes, and a more comprehensive modulation matrix.

The GUI is split into three sections, with the main filter controls at the top, the envelopes window in the centre and the modulation matrix at the bottom; both positive and negative modulation amounts may be entered. The envelopes, which can be looped and tempo‑sync’ed or triggered from the audio input, can be used to drive sequencer‑like effects or to create custom-shape LFOs. The two filters may be run in parallel for stereo processing, or in series to create steeper filters and sharper resonances. Each of the two filters offers a choice of 15 different responses. The Modulator sections comprise three envelope generators, a Random source and a Modulation Oscillator ranging from 0.01Hz to 10kHz, each capable of controlling multiple parameters or of jointly controlling the same parameter courtesy of the 5x8 matrix. It is possible to route the two filters to separate audio outputs within your DAW.

Of the three filters, I found the SEM‑Filter with its gating capabilities gave the most instant gratification for creating rhythmic loops. Its noise generator is a big help in adding emphasis to attacks or, more overtly, for creating an electronic snare type of sound. By combining the filters and gating, a useful range of rhythmic effects can be set up using just about any type of audio input, even bland pads. As with all three filters, having a wet/dry mix helps back off the effect if it starts to dominate. Their envelope followers can also be used to add synth‑style filter effects to any inputs that have a clear note start to use for triggering.

The Mini Filter is also capable of useful rhythmic filter‑based results as well as LFO‑controlled sweeps. The old‑school sequencer makes this very easy to set up, and there are some lovely results to be had as the filter settings change between sequencer steps or under LFO control. Again the wet/dry blend comes in useful to sit the effects behind the dry sound.

It is probably fair to say that the M12 is the most complicated of the three plug‑ins because of its more extensive modulation options, including three envelopes that can be used to control a range of parameters, including LFO rate. However, it doesn’t take long to master and the results on offer make it well worth exploring the capabilities of this filter, which can range from EDM-style rhythms to slow sweeps. In all three filters, the character of the filters themselves is nicely assertive, but the filter sound is also clean and smooth due to Arturia’s anti‑aliasing approach to filter design. Do take time to look at how the factory presets are put together too as they can teach you a lot about the best way to create specific types of effects. So, three filters that you’ll actually use? Definitely so.