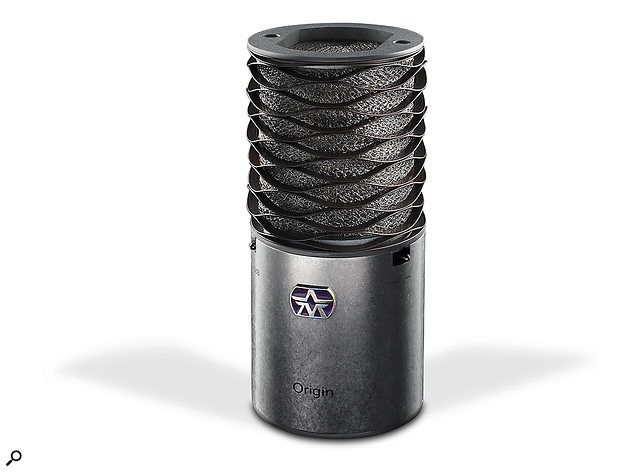 If the name of this new company evokes an iconic British brand, that’s perhaps appropriate — for Aston design and build all their mics in the UK!

Although Aston Microphones are a new company, the people behind the brand have no shortage of experience in this market. Unlike almost every other affordable studio microphone company, Aston design assemble and test all their mics here in the UK. The third-party capsules and other key electronic components are, we’re told, chosen following extensive ‘golden ears’ listening panel tests to choose the best-sounding combination of capsule and circuitry. Since many of the panel members were engineers and producers from the UK audio industry, it might be inferred that the resulting Aston microphones have something of a British sonic character. Manufacturing is handled by the same UK company that builds the Munro Sonic Egg speakers, and each microphone is individually tested at multiple stages during production.

Aston’s range currently comprises two models — the Origin, reviewed here, and the Spirit — both of which have exactly the same physical construction, other than that the multi-pattern Spirit has a longer body. Top-of-the-line electronic components, such as the WIMA capacitors often found in boutique models, are used in the design, and the housing is also unusual in that the conventional basket has been replaced by a stainless-steel ‘spring’ cage structure that is not entirely rigid. Should the mic happen to get bumped, the cage is designed to deform slightly to absorb some of the impact, after which it can be re-centred simply by rolling the mic on a flat surface. This same design also avoids having wide vertical support posts that reflect sound within the capsule housing — a known cause of high-frequency bumps and dips in the response curve. In this design there are just two very thin, internal posts supporting the basket.

Inside the spring structure is a fine stainless-steel mesh that is reasonably effective in reducing popping, and which can be removed for cleaning when necessary by removing the cast top plate of the microphone, which is held in place by two cap-head bolts. The main barrel of the body is made from stainless steel with a ‘tumbled’ finish and laser-engraved legending, lending it a ‘lived-in’ look. Both an XLR socket and a US (5/8-inch) standmounting thread are recessed into the base casting (a thread adaptor is included for use with European mic stands). Though the mic can be used with a shockmount (and a rather fine Rycote shockmount will be included free for the first few months of issue), the internal capsule suspension is effective enough that the mic can be used screwed directly to a mic stand in many situations.

The Origin is a side-address, cardioid-pattern mic with a one-inch diaphragm diameter, and is fitted with both a -10dB pad switch and an 80Hz LF roll-off switch. A discrete Aston logo denotes the hot side of the mic. It features transformerless electronics and operates from standard 48 Volt phantom power (±4V) offering a frequency response of 20Hz to 20kHz (±3dB). Its sensitivity is 23.7mV/Pa (at 1kHz into 1kΩ), and its maximum SPL handling ability is 138dB without the pad switched in. The noise figure is comparable with that of many other similar style microphones, with an EIN of 18dB A-weighted — maybe not the lowest noise figure around then, but certainly not an issue in typical studio applications.

It is worth noting that Aston Microphones are doing their bit for the environment by shipping their mics in 100-percent recyclable cardboard boxes lined with rigid polyurethane foam. The boxes are sturdy enough to be reused for storage and certainly take up a lot less shelf space than all those camera cases. 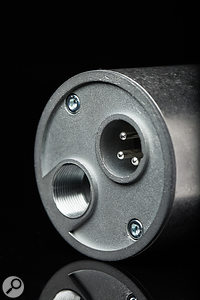 The base of the mic houses the XLR output, as well as a mic-stand thread for use without a shockmount.On paper the performance seems to be pretty much what you might expect, but of course it is the sound that really matters, and what I look for first in a microphone is the ability to render detail in a smooth and natural way. Most of what you need to know about this type of microphone can be gleaned from speech and acoustic guitar recordings, with the caveat that it is always best to audition a number of microphones if you need a mic mainly for one specific vocalist. In that case it is important that the character of the mic complements the character of the voice — and that’s something the spec sheet can’t really tell you. In my experience this is particularly true of female vocalists as, in general, they have more high-frequency complexity in their voices.

My vocal tests revealed that the mic sounds noticeably different depending on whether the low-cut filter is switched in or not. To some degree this is to be expected, of course, and many other mics behave similarly, though for male vocals you may be better off recording without the filter and then applying one in software with a slightly lower cut-off frequency, as the in-built filter thins out the low end quite significantly. With no filter the low end of the voice is very full and warm at a mic distance of 250 to 300 mm, and though you can see peaks in the recorded waveform during the pronunciation of P and B plosive sounds, you don’t really hear any obvious popping unless you allow the recording system to clip. With the filter in, popping is reduced to the point that it can be considered negligible, but in the studio I’d probably choose to leave the filter off and still add an external pop shield.

All mics sound slightly different from each other, even when the specs look similar, so much depends on your personal interpretation of what constitutes a ‘true’ or artistically satisfying sound. While subtly flattering, the Origin’s tonality comes across as subjectively natural with good clarity, a sense of weight and a lack of harshness, something that carries over to acoustic guitar recordings, where the highs are smooth yet well focused. As with any mic, you have to make a few tweaks to find the sweet spot when recording the guitar, but once you’ve found it there’s depth, warmth and detail in equal measure. Picked guitar sounds suitably articulate and little, if any, EQ is necessary to coax a good sound out of the pairing.

Given the relatively low cost of the Origin, it compares very well with other mics in the same price range and it can even give some significantly more costly mics a run for their money. The ‘built in Britain’ provenance doesn’t hurt either, and I do like the departure from conventional styling. If you can get one while the Rycote shockmounts are still being bundled with it, the Origin is even more of a bargain.

While I can’t think of any UK-made alternatives, there are countless cardioid side-address capacitor microphones on offer from companies such as Rode, AKG, MXL, sE, Studio Projects, Sontronics and many more.

While not departing too far from convention other than in its basket design, the Origin manages to deliver a clean and solid sound that is slightly flattering but without adding undue harshness. It is also the first British-built microphone we’ve encountered at this price.