For some years, Sambell Engineering (who manufacture the Atacama range) have provided a 'bespoke' service, making one‑off stands to order for recording studios. However, since no‑one seemed to market an off‑the‑peg model tall enough for small studios, they have now put together a new product which addresses this need directly. The Pro 10 stands have a large top plate (width 170mm and depth 195mm) and a large base plate (305mm by 305mm), which makes them stable and safe with heavier nearfield monitor speakers. 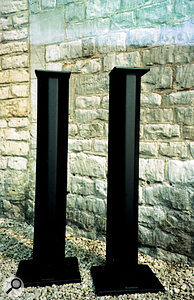 Ideally, a speaker stand should provide a rigid mounting which will lift the tweeters up to ear height. When you're sitting in your chair at the mixing position, small nearfield speakers would thus be about one metre above the ground — which is exactly the height of these new Atacama models. As supplied, they ring like gongs, being largely welded together to give a rigid assembly, but they have a bolt‑on baseplate (bolts and an allen key are supplied), and the idea is that you partially fill them with dry sand (using the supplied polythene bags). I bought some kiln‑dried sand from a local builders' merchants — a 40kg sack cost me £3.60, and this was sufficient to fill both stands to well over half‑height.

Once you have your stands filled, spiked and in position, you can sit back and hear the improvements to your monitor sound. You'll probably be surprised at just how much the sound of your monitors changes. The bass end tightens up, losing that boomy, uncontrolled bottom end, which is replaced with a tighter, faster, more weighty sound, whilst the mid‑range and treble should gain more clarity and precision. You should be able to hear further into the mix, with previously submerged subtle details becoming more apparent, while the stereo image is sharper. The overall effect has been described as like 'turning a screwdriver to tighten up the sound'. I couldn't have put it better myself! To sum up, these stands are a worthwhile improvement to any studio setup, which should get the most out of existing speakers and won't break the bank.