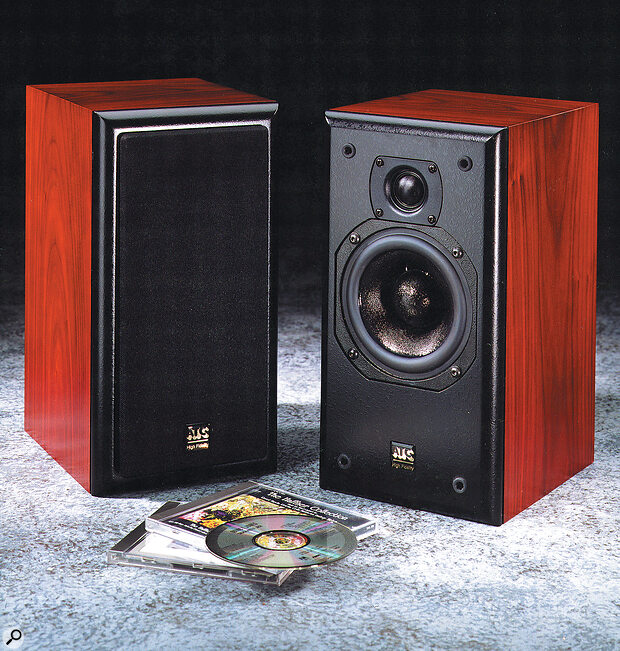 Paul White tests ATC's smallest and least expensive monitors to date, and finds that they still have the pedigree family sound.

ATC make some of the most accurate studio monitors in the world, but their smaller speakers are also very popular with discerning hi‑fi users, so they have developed the two‑way A7, a small passive monitor primarily intended for hi‑fi use. The A7 employs a compact but massively‑built bass/mid driver, the centre section of which looks very much like an ATC soft‑dome mid‑range unit.

Whereas ATC's larger SCM10 has a very steady low‑frequency rolloff, the A7s have a character somewhere in between that of the SCM10 and what you'd expect from a conventionally ported hi‑fi cabinet. The result is a little more bass in the 80Hz region, where most pop music concentrates its LF energy, balanced by a slightly steeper rolloff below this frequency. Overall, the frequency response extends from 60Hz to 20kHz within +/‑6dB and from 100Hz to 14kHz within +/‑2dB.

Handling the high end is a 25mm Vifa soft‑dome tweeter, but whereas the SCM10 tweeter uses a conventional magnetic structure combined with ferrofluid cooling, the A7 uses a smaller, lighter Neodymium magnetic assembly augmented by a finned heat sink. Ferrofluid cooling is not used in this tweeter. The passive 2.5kHz crossover uses a similar circuit topography to that in the SCM10, though to save cost, the rear terminal panel is a plastic moulding and the crossover is mounted directly onto the back of this. The cabinets are finished in real wood veneer, not plastic foil, and are very nicely made with a high standard of finish. Each monitor weighs 7.5kg. For surround applications, ATC also build a centre speaker based around two of the same bass drivers plus a single tweeter in a 15‑litre cabinet. A tower version of the A7 is also available.

With a nominal impedance of 8Ω, the A7s are around 3dB more sensitive than other ATC models, at 83dB at 1W at 1 metre. Recommended amplifier power is between 50 and 300 Watts per channel. However, these are very revealing speakers, so it is important to use them in conjunction with a good quality amplifier that won't distort at high signal levels. The maximum continuous SPL is 103dB, more than loud enough for nearfield monitoring, and though the A7s are not magnetically shielded as standard, a shielded version can be supplied at a nominal extra cost.

Though designed for the hi‑fi market, the A7s are accurate enough to be used in discerning nearfield monitoring applications, and the depth of sound they produce belies their compact size. They don't quite match the transparency and confidence of the more expensive SCM10s when pushed really hard, but they have the same general family sound, and at more realistic levels, they're incredibly clean and revealing, especially on difficult acoustic material. They have the same ability as the rest of the ATC range to present a three‑dimensional soundstage, and even though these are the least expensive speakers ATC make, it would be wrong to consider them a poor relation in any way. What I really like about ATC monitors is how smooth well‑recorded material sounds, particularly voices, and if you make an error when mixing, they'll let you know straight away. The sound isn't hyped‑up in any way, so on first listening, some competing monitors may sound more impressive, but after a while, you realise that the ATC A7s are showing you what's really there. You can monitor on these speakers for extended periods without feeling fatigued, and because of their compact size, they will fit into virtually any compact studio or edit suite.

While the A7 still can't be classed as cheap, it does bring ATC quality into the affordable range, and despite its small size, the bass extension is quite adequate for use in small to medium‑sized rooms without the boxy side effects of less sophisticated designs. Don't let the fact that this speaker is designed for the hi‑fi market put you off either, as the A7 is engineered to the same standards as ATC's other products. If you're after a really good small monitor, the A7 won't disappoint.

An affordable (if not exactly cheap) and compact monitor that's accurate enough for the most serious of applications.