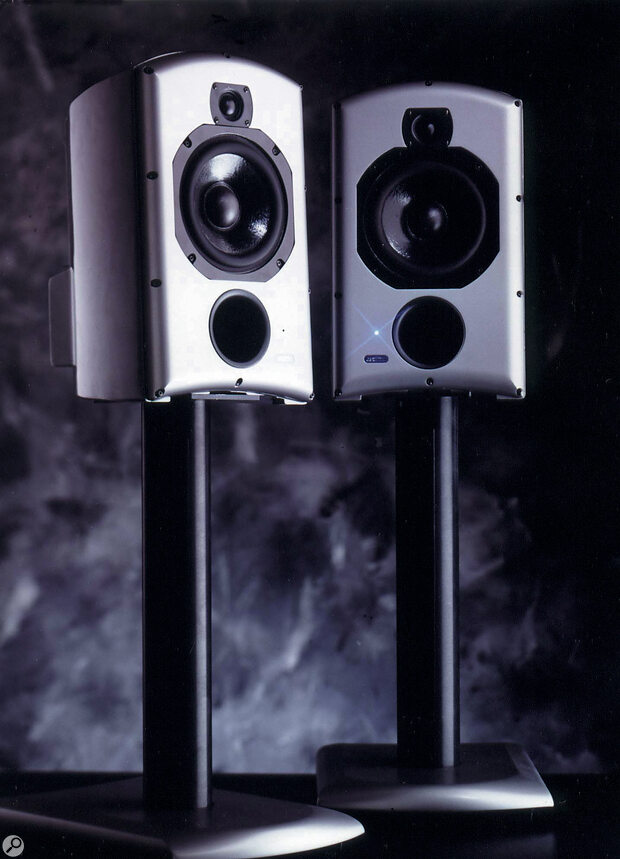 ATC have always been close to the top of the studio monitoring tree, but their use of heavily engineered, hand‑made components has tended to push even their smaller monitors into a price bracket that few project studio owners could contemplate. I think it's fair to say that ATC speakers will never be cheap, but the company is now committed to building a new range of more affordable active monitors, the first of which is the T16. If it looks familiar, that's because it shares the same cast‑aluminium cabinet as the more expensive, and considerably heavier, active SCM20A. However, it's a very different monitor.

The T16 is a two‑way, ported design which sits on three integral feet, the rear of which is height adjustable. The distinctively shaped cabinet combines non‑parallel sides and an inherently well‑damped structure with a massive 18mm‑thick MDF baffle. The entire enclosure is filled with sound dampening material, both to attenuate standing waves and to increase the effective volume of the acoustic space. Measuring just 448 x 270 x 330mm, each monitor weights a hefty 17.5kg, though it seems like a featherweight compared to the hernia‑inducing Active SCM20A! Substantial threaded inserts are included on the rear panel for installation mounting, and there are also four threaded holes in the underside panel for mounting the speaker on speaker stands.

Inside the cabinet, everything is brand new, right down to the power supply. Gone is the massive C‑cored transformer of the SCM20A, which is replaced by a torroidal transformer, and the MOSFET amplifiers and active crossover are of a completely new design by Tim Isaacs of ATC. Moreover, the bass and mid‑range are handled by a new higher‑efficiency 6.5‑inch ATC driver powered by a long 45mm voice coil wound using flat ribbon wire. The driver unit has a paper cone, but a newly developed damping treatment has been applied, giving the cone a somewhat 'lumpy' appearance. Using a long voice coil has allowed some cost saving in the magnetic structure — the new ATC super‑linear magnet system used in all the company's latest short‑voice‑coil drivers (including the SCM20A) is not required. Even the tweeter is different, again in a bid to reduce cost, though it is still made by Vifa, using a one‑inch soft‑dome with a neodymium magnet — ferrofluid cooling and integral heat‑sink fins on the back of the tweeter help keep the magnet cool.

Another major difference between the SCM20A and the T16 is the T16's use of porting, something that ATC have traditionally avoided on their smaller monitors. I'm told this was a concession towards making the monitors sound more the way most users expect studio monitors to sound. ATC's portless design produces a more gentle low frequency roll‑off curve and greater low‑frequency bass extension, but with the roll‑off starting at a higher frequency than the ported equivalent. This approach, which is better for reproducing organ pedal notes for example, leads some users to perceive the monitors as being bass‑light at typical kick‑drum frequencies. In the T16, the port is tuned with a low resonance to avoid bass humping or too fast a low‑frequency roll‑off — the result is a frequency response that's flat from 70Hz to 17kHz within ±2dB, and which is just 6dB down at 62Hz and 20kHz.

The amplifiers supply 200 Watts of power to the woofer and 50 Watts of power to the tweeter, with a crossover frequency of 2.8kHz. The rear of the case is finned to act as a heat sink and the power amp assembly is bolted to the case via a thermally conductive insulator sheet. Both the IEC mains socket and the balanced XLR input are located on the rear panel and a small blue LED on the front panel shows when the monitor is powered up.

Though it's been a long‑standing ATC philosophy that accurate monitors shouldn't need any user adjustments, this time they've taken the pragmatic view that, although you can't solve room problems with EQ, users still expect some degree of control over the bass end to allow for placement and personal taste. The outcome is that the rear panel sensitivity pot has been joined by a variable bass boost control with a range from 0 to +6dB. Finally, and perhaps most radically given ATC's traditionalist image, is that, in addition to the tasteful silver‑grey of the review models, you can also buy the T16s in bright blue, green, turquoise, yellow and shocking pink. If that isn't enough choice, you can have a custom paint job for a small extra charge and optional lightweight flightcases are available for producers wanting a mobile reference.

According to ATC, the T16's were designed to satisfy the need for a modern monitor that would be at home with pop music and electronically generated sounds. With a maximum SPL of 108dB at one metre, The T16 is certainly loud enough, given that most people will use it for nearfield or mid‑field monitoring, but I was also impressed by the way the speakers translated more discerning jazz and acoustic music recordings.

The change of tweeter has given the T16s a slightly more forward character than the SCM20As, but it never intrudes and it successfully manages to deliver detail without sounding edgy or abrasive. Vocal delivery is very solid and natural while the stereo imaging is first‑rate, with a comfortably wide sweet spot. In practice, I think that only the most discerning classical listener would be able to spot where the money has been saved over the SCM20As. Indeed, I feel that most studio engineers will find the slightly forward sound more 'normal' than the traditional ATC ultra‑flat character.

At around £1800 a pair (over £1000 cheaper than the SCM20As) in the UK, the ATC T16s compare well in price against equivalent models by companies such as Dynaudio and Genelec and will appeal to those who appreciate ATC's accuracy and supreme build quality. These monitors are both visually and aurally striking, they perform exceptionally well over a wide range of source material, yet they are compact enough to use in smaller studios or as part of a surround monitoring system. If you've always wanted ATC, but couldn't afford the asking price, here's your chance.

A new direction for ATC that should see more of their active monitors appearing in both private studios and commercial facilities.