There aren’t many large-format mixing consoles that have remained in production and fundamentally unchanged for over 18 years. In fact, I can only think of one: Audient’s ASP8024. To remain in production for so long, and especially without any significant changes during that entire time, is clearly a testament to the quality of the original design, both technically and from a usability perspective. And if more confirmation of these attributes were needed, it can be found in the fact that Audient have made over one thousand ASP8024 consoles, and most of them are still in use all around the world. In fact one of the oldest, at 16 years, is just about to be replaced in a New York studio... with another new Audient console! After such a long life, you might expect Audient to call time on the ASP8024, but the company understand the old adage, ‘if it ain’t broke, don’t fix it!’ Consequently, this venerable flagship console has recently received the gentlest of makeovers, which will doubtless extend its life for another decade or two.

The new version of this flagship console is the ASP8024-HE, the last two letters denoting that this is the ‘Heritage Edition’. Given the original design’s proven fitness for purpose, the updates have been constrained to some gentle polishing and a little thoughtful enhancement here and there. But before I get into the specifics, let’s rewind a bit to the start of this rather unusual and intriguing story.

Audient were set up in 1997 by Gareth Davies and David Dearden after their previous console company, DDA (‘Dearden Davies Associates’), was acquired by Klark Teknik. The ASP8024 was launched in 1998 and was originally intended to be a fixed-format, three-bay, 24-channel, in-line multitrack recording console, boasting top-notch technical specifications (in particular having a very low noise-floor to be ‘digital-friendly’), but offering no configurable options and no customer variations.

That said, the name actually derives from the acronym for ‘Analogue Signal Processing’ (remember, this console was launched in an era when every manufacturer was developing digital consoles) and the primary I/O structure of a 36-channel console (two inputs per channel plus four stereo returns gives us the 80, and the number of bus output channels gives us the 24). So the possibility of a larger four-bay version must have at least crossed the designers’ minds at some point.

From a marketing perspective, the ASP8024 was aimed squarely at the mid-market recording sector, which, essentially, meant large project and small commercial studios — the kinds of operations for which a Mackie 8-bus fell short, both in terms of bus-count and technical performance, but where an SSL, Neve or API masterpiece was totally unaffordable. I reviewed the original ASP8024 in SOS March 2000, and at that time the 24-channel version was priced at £15,000 — that’s roughly a 10th of the cost of broadly comparable ‘big-name’ consoles at that time.

Although the core of the desk — the channel bays and master section — has remained steadfastly unchanged, by 2000 the console had acquired a few options and variations, and was being offered with up to 60 channels (for £26,000), and a side patchbay was also available. Since then, several other options have been introduced, including single or dual-bay Producer Desks (which can also accommodate various third-party DAW controllers such as an Avid S3, Artist Mix controllers or even a Slate Raven). A Dual Layer Control (DLC) bay is available, providing integrated (HUI) DAW control and eight patchable VCAs with motorised fader automation. The integrated patchbay has also been expanded to accommodate consoles with up to 48 channels, and the largest frame size has grown to a whopping eight bays, accommodating 72 channels with 152 inputs to the mix bus. (A remote patchbay is recommended for the largest 60- and 72-channel configurations.)

One of the ways in which Audient managed to deliver such a capable console at such an affordable price was to change the way the console was engineered mechanically. Instead of the traditional approach for large-format consoles, in which costly individual channel modules supported vertical circuit cards, console-designer Dave Dearden adopted an approach similar to that employed in many much smaller budget consoles, with surface-mount technology (SMT) on a single large circuit board mounted horizontally under the control surface, accommodating all of the electronics and user controls for a relatively large number of channels. This is a very cost-effective construction strategy, although it can make servicing much more difficult, which is often not acceptable in a professional studio environment. 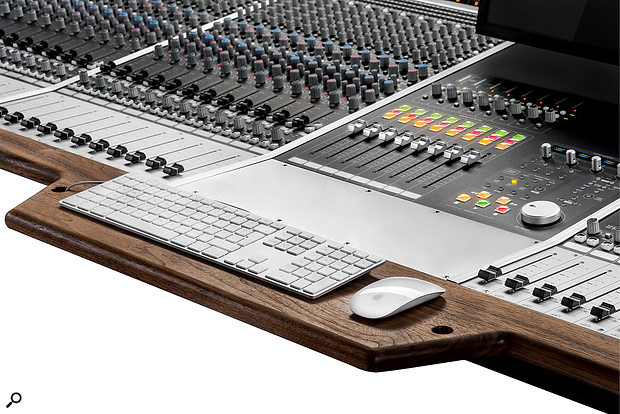 The optional arm/keyboard rest is one of many small but useful new features in the Heritage Edition version of the ASP8024.

Another important factor is how many channels to incorporate per mechanical channel bay. Most consoles are built with bays of eight or, occasionally, ten channels. But for the Audient’s design the more channels squeezed into an individual circuit board, the more cost-effective the construction could be. In the end it was the maximum production size of PCBs, combined with the physical space required for all the associated channel circuitry, which determined the channel count, and that’s why the channel bays of the ASP8024 accommodate 12 in-line channels per module, with a reasonably compact 37mm channel spacing (for reference, that’s 1mm narrower than the API 500-series module width).

That’s a lot of channel circuitry to access and maintain, but Dearden’s solution was to build the frame in such a way that each 12-channel bay hinges up to allow access while still powered. This makes live circuit testing very straight forward, with no need for the expensive extender cards required in traditional modular consoles, or for powering the console up and down to install and remove the extender modules.

If necessary, an entire bay module can be replaced by unplugging a few ribbon connectors, but the design intention is really that the console can be serviced easily on-site. To that end, although all of the inherently reliable passive components (such as resistors and small-value capacitors) are surface-mount types, anything that might conceivably require replacement during the life of the console (such as electrolytic capacitors, op-amps, switches and so forth) are conventional through-hole components. Spare modules can be purchased to minimise console downtime should a fault occur, or modules can be swapped out and serviced remotely if preferred.

I gave the impression above that the entire 12-channel module is constructed on a single PCB, but that’s not actually the case — the control surface area is too large to be constructed as a single circuit board, so there are actually two main boards in each channel bay. The upper PCB carries all the auxiliary sends and bus-routing facilities, while the lower one houses the equaliser and short-fader circuitry. The mic and line input circuitry and the metering electronics are contained on a third board, installed in the meter-pod upstand at the rear of the console.

Another cost-cutting design feature was the revolutionary use of a reverse-printed polycarbonate laminate, fixed on top of the bay metalwork to provide all of the control surface markings. Not only is this clever solution much more cost-effective than traditional silk-screen printing or metal etching, it’s also immensely durable and far more easily cleaned — which is why elderly ASP8024s still look extraordinarily good, even after years of hard use. It also enables elegant backlit legends, making the channel status very obvious.

Each channel offers extensive control over routing, as well as switchable filters and EQ.So, through a combination of innovative design and construction, Audient managed to build a fully featured large-format console with superb technical specifications and great looks, for a fraction of the cost of a traditional modular console, while retaining easy on-site serviceability — this was an industry first. The success of this approach is highlighted by the fact that the Audient service department typically don’t get involved in servicing any ASP8024 consoles until they are at least a decade old, and even then it’s usually only to replace the power-supply capacitors. A key part of this extraordinarily impressive reliability is the fact that the console doesn’t ‘run hot’ — it’s a very power-efficient design, and that reduces both the thermal stress on components and the running costs.

As I covered the original console in some depth (see the PDF mentioned above), I won’t give a detailed breakdown of the control surface here. In brief, though, each in-line channel features a dual-input arrangement with ‘Long’ and ‘Short’ fader paths (LF and SF), both with their own balanced insert points. The mic or line input is normally routed through the short fader and bus routing to feed the tape/DAW recorder, while the tape/DAW return is routed through the long fader to the stereo mix bus (which has its own balanced inserts as well as a stereo bus compressor). The input sources can also be swapped (‘flipped’) between the two paths, if required, and the output of the long fader routed back into the short fader path to access the bus routing to employ the 24 outputs as additional effects sends — a feature normally only found on much more costly consoles.

Each channel is equipped with a four-band equaliser split into two sections, one containing the high and low shelves, and the other the two parametric mid bands. These two elements can be allocated independently to the short or long fader paths as required. Similarly, the auxiliary sends can be accessed in pairs from either fader path. There are 12 standard aux sends in total, accessed from six knobs and ‘shift’ buttons, plus two special cue auxes intended for artist monitoring. Similarly, the 12 bus-routing buttons access all 24 buses through a ‘shift 13-24’ button, along with facilities to take the routing source from the long fader instead of the short fader, and allow the signal to follow the channel pan between odd-even bus pairs. (There’s also an option on large-frame consoles to separate or link the bus routing in each half of the console, to support up to 48-track recording.)

To aid navigation around the console, a subtle but effective colour scheme is used (darker for the short-fader input path and lighter for the long-fader monitor path), and backlit legends indicate the signal source for the two paths.

Moving to the centre section, the unexpected control spaciousness is mainly due to the hidden electronics for the aux and bus summing and output amplifiers. Four stereo effects-return channels are provided, each routable to the 24 tape/DAW buses for recording effects stems, as well as to the stereo mix bus and directly into the two cue aux buses to allow artist headphone monitoring with effects. Output trim controls are provided for the 24 buses, and the first eight are also duplicated to a set of eight sub-group faders, each with balanced inserts and separate physical outputs. These subgroups can also be routed to the stereo mix bus via pan-pots, and can be used with the optional DLC module to incorporate VCA automation directly into sub-mix stems.

Master output level controls are also provided for the 14 aux sends, along with some clever sub-routing facilities which allow artists to monitor both a mic source and its corresponding tape/DAW track during drop-ins. And talking of the artist monitoring facilities, the desk provides independent source selection and level controls for one set of studio loudspeakers and two dedicated stereo headphone systems, labelled Foldback 1 & 2 (changed from the previous A&B labelling following user feedback).

For the control room monitoring, there are three external stereo inputs, and routing to the main or three alternative speaker systems. A sophisticated solo section is also provided with global selection of AFL/PFL, ‘destructive’ solo-in-place (where a soloed channel remains on the mix bus while everything else is muted), and a useful ‘solo-in-front’ mode to allow a soloed channel to be auditioned ‘in context’ as the main mix is allowed to bleed through at a reduced level. A line-up oscillator, stereo mix-bus compressor, and talkback facilities complete the console.