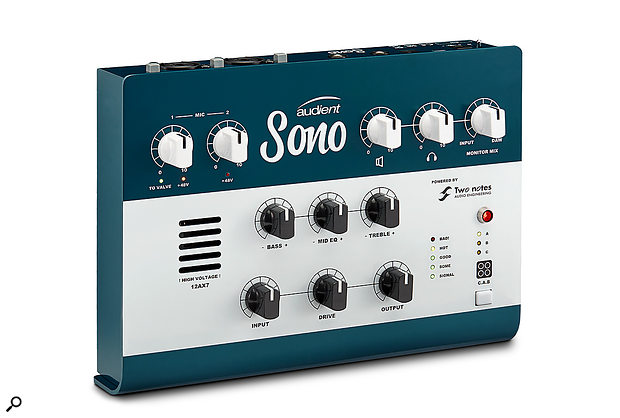 Audient have used their considerable expertise to create an audio interface just for guitarists.

Audient's Sono is an audio interface designed specifically with guitarists in mind — and that doesn't mean just adding a high‑Z instrument input and then saying 'job done'. The Sono includes a high-voltage (over 200 Volts) 12AX7 dual‑triode valve in the preamp signal path plus an analogue three-band tone section optimised for guitar. If it just stopped there that would be good news, but Audient have done a licensing deal with Two Notes to add their respected Torpedo processing, which provides power amp simulation and IR-based cabinets with a useful choice of 20 cabinets (plus the ability to purchase more) and the capability to store three presets within the Sono itself.

Very importantly, all the processing is handled via the on-board SHARC DSP, so there's none of the latency associated with using plug-ins and no additional CPU load. In addition to its obvious recording functions, the Sono can also be used for re-amping (a dry signal may be sent via channel 3) or even for playing live without a computer. What the Sono doesn't do is try to replace your entire processing chain, so if you want specific overdrive, reverb or other effects you can use your own pedals in front of it or add further effects using plug-ins, just as you would when recording with a standard amplifier. Because the input stage of the Sono replicates that of a typical valve amplifier, the interaction with pedals is quite authentic.

Out of the box, the Sono can be used as a two-channel interface (four if you have an S/PDIF device you want to connect) with a guitar input and a 'To Amp' jack (padded to line level for re-amping) on the front panel, along with a quarter-inch phones output. At the rear there's a pair of 'combi' mic/line XLR/jacks (with separate phantom power switching for each input) and a pair of quarter-inch speaker outputs. Input 1 can also be sent via the valve preamp or not, as appropriate. If more I/O is needed, Audient have also added an optical port that can be used either with an eight-channel ADAT‑compatible expander or as a stereo S/PDIF input. Power comes from the included universal‑voltage PSU and connection to the computer is via the included USB‑C cable. Instructions are provided for downloading the Sono mixer app and Two Notes Remote Arcade software, both of which come in Mac OS and Windows flavours. Note that if the Sono mixer is in use, it overrides the Monitor Mix control.

On the top edge of the front panel are mic gain controls, an indicator to show if the valve is switched into the signal path, and a phantom power indicator. There's also a speaker level output control, a headphone level control and a Source/DAW Monitor Mix control for latency-free source monitoring. The headphones are normally fed from converter outputs 3+4, so can be independent of the main speaker mix unless you are using the re-amping facility. In the lighter-coloured section of the panel are controls for the EQ section, preamp gain, power amp drive and preamp output level, along with a five-LED level meter and a cabinet selector button, which steps through the three presets, with three LEDs indicating which is currently active.

The Sono application accesses a software-controlled mixer and allows control over the optical S/PDIF or ADAT channels, making it possible to record up to 10 channels at the same time by adding an ADAT linked, eight-channel converter. The Two Notes Remote Arcade application allows useful changes to be made, such as blending the speaker character from vintage to modern, warming the tonality and changing the mic distance. As the mic distance is increased, a short room ambience is added to the sound. You can also change the room in which the guitar cabinets are placed, thus changing the ambience character when the mic distance is increased. There are several useful spaces including a crypt. You can also select from a number of popular microphone types, dial in more or less power amp saturation and adjust the relative levels of your different presets.

The Two Notes Remote Arcade application also allows optional cabinets to be auditioned before purchase. If you only want to see the included 20 cabinets, just switch off the Two Notes Remote Arcade online application button. The extra speaker cabinets are downloaded and can be saved as a library of user presets. Any three can then be sent to the three Sono presets and these are available even when the Sono is disconnected from the computer, so you could take the Sono to a gig and still call up three different cabinet simulations.

Sonically the mic and line inputs are all you'd expect from Audient — clean, quiet and transparent-sounding. Bring in the valve and add the cabinet simulation and you have the means to DI a guitar capturing much the same sound as when miking an amp in the studio. There's enough drive to dial in a sweet blues tone, but that's it for bells and whistles — again just like a real amplifier.

Having the signal path optimised for guitar also improves the playing feel of the instrument, and because all the processing happens inside the Sono the monitor control can be used to hear latency-free guitar complete with all its processing as you record. This feels much more immediate than playing through a DAW with even a small amount of latency. Changing the speaker cabinet makes a significant difference to the sound of the amplifier, so it is worth checking out all the available options to see what works best for your style of playing. You'll find all the big names represented there, and because they are based on impulse responses taken from the real thing, they sound extremely authentic. Bass cabinets are included, as the Sono is also perfect for DI'ing bass.

Note that when re-amping, output 3 (which normally feeds the left headphone output) is used, so the headphones follow the main speaker output rather than being fed from an independent monitor mix. Audient tell us that this allows them to use higher‑quality converters rather than more channels of lower-cost converters, which seems reasonable as you wouldn't need an independent phones mix when re-amping.

What I like about the Sono is that in addition to making the DI'ing of electric guitar (or a synth come to that) a lot more comfortable, it doesn't try to railroad you into a particular way of working. If you have a preamp you like to use, you can switch off the valve stage — if you have a software cab emulator you'd rather use, then you can use that instead. Or if you want to use a software‑emulated amp/speaker combination, you can use the Sono as a regular audio interface with or without valve flavouring. And it plays nicely with your existing pedal collection. The added features are well thought out, they sound good and they are easy to use, but they won't get in your way when you don't need them. In a word: impressed.

This is the most sophisticated 'built for guitarists' audio interface I've come across, and it still functions as a clean, transparent mic/line interface when needed.