Avid’s Pro Tools HDX, like its HD predecessor, has always been a fairly ‘closed’ system: it uses a proprietary plug–in format (AAX), requires an Avid PCIe or Thunderbolt card (either HDX or Native) to run, and is intended — by Avid, at least — to be used with the company’s own A–D/D–A converter interfaces. Most other DAWs will usually work with a variety of plug–in types (VST or AU being the commonest), while almost all — including the non–HD version of Pro Tools — are quite happy to pipe audio through interfaces from almost any manufacturer, as long as ASIO or Core Audio drivers exist.

This aspect of Pro Tools HDX has prompted some complaints, but it has the advantage of guaranteed performance and stability: a necessity for professional facilities, where a flaky system could spell disaster in terms of angry clients and lost revenue. Because Avid only officially support their own interfaces (namely the HD Omni, HD I/O, HD MADI and Pre), they are able to focus all their testing and troubleshooting on just a few devices, unlike other DAWs, which have to be able to cope with interface drivers that have been coded by different companies and with varying degrees of competence. 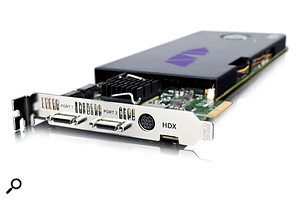 Although the DigiLink and DigiLink Mini connectors are a proprietary Avid protocol, many third–party manufacturers make interfaces that use them.The operative word there, though, is ‘officially’: there are now many companies making converters and interfaces that, while not explicitly sanctioned by Avid, either sport, or can be made to sport (via expansion cards), an Avid DigiLink or Mini DigiLink socket, for connection to an HDX or HD Native card. And although such devices are officially ‘unsupported’ by Avid, third–party interface manufacturers do perform rigorous testing themselves, and almost always provide detailed information on which systems and versions of Pro Tools they are known to work well with.

The question remains, though: why would you opt for one of these ‘unofficial’ interfaces when going down Avid’s preferred route guarantees at least some recourse should tragedy befall your HDX system?

One reason is mentioned not once, but twice, in the name of this very magazine. People will almost always express a preference for the sound of one converter over another, and while pretty much all HDX–compatible interfaces are of a high standard — it is, after all, an expensive, ‘professional’ system — great import is often placed on the subtle differences in sonic character imposed by different interfaces.

Given that they all perform well, though, perhaps a bigger reason lies in the differing feature sets. Some interfaces offer more headphone outputs than others, say, while some offer a greater number of mic preamps (some, like those on the Apogee Symphony I/O, are even remotely controllable).

One final issue to be aware of concerns latency. HDX systems are capable of running at extremely low latencies thanks to the DSP cards they use, but an often–overlooked fact is that A–D and D–A converters impose their own latency, independently of that caused by the combination of a computer and interface. Since Pro Tools HDX always assumes it is working with an Avid converter, its automatic delay compensation is tuned to negate the specific amount of latency that is inherent to HD I/O, Omni I/O and Pre interfaces. This could potentially cause problems when using a third–party interface, as the assumed delay incurred by audio leaving through an analogue output and returning through an analogue input could well be different to the reality (Lynx’s Aurora is the exception here, as it has been specifically designed to incur the same amount of latency as Avid’s own interfaces). Don’t let that put you off too much, however: the very slight differences in latency between converters are only ever likely to present a problem if you are wont to use complex routing of outboard hardware.

Interfaces For Avid Pro Tools HDXNeed some I/O for your Pro Tools HDX rig? Check out our round–up of current options.Avid HD I/O

Along with the HD Omni and HD MADI, the HD I/O is one of the interfaces that comes as standard with a new Pro Tools HDX setup. It’s available in three different I/O configurations, depending on what analogue and digital connectivity you need. The 8x8x8 version features eight line–level analogue I/O (on D–sub connectors), eight digital I/O via either AES3 or T/DIF, and a further optical set of I/O that can accommodate either eight–channel ADAT signals or stereo S/PDIF.

The combination of a Lynx Aurora 16 and an LT HD expansion card provides up to 32 inputs and outputs in a 1U rack, making it the most compact 32–channel HDX interface. Another unique selling point is that the Aurora 16 has been engineered to incur exactly the same conversion latency as Avid HD I/O, which means that Pro Tools HDX’s automatic delay compensation should work seamlessly, even when using outboard gear as software inserts.

As with all MADI products, the name of the game with SSL’s Delta Link is high channel counts — up to 64, in fact, from a single unit, and all compatible with a large range of devices, from digital mixing consoles to broadcast multitrack recorders. SSL claim that the Delta Link’s latency is only one sample for the inputs and two samples for the outputs, which equates to a tiny 0.02 or 0.04 milliseconds. The two MADI ports can be set up to run in ‘mirrored’ mode, which is very useful for redundancy or recording purposes.

Apogee’s highly configurable Symphony I/O offers direct connection to HDX cards, without requiring any expansion. Like Avid’s own interfaces, the Symphony I/O is highly configurable, thanks to a range of I/O modules that provide various combinations of analogue, ADAT and AES3 inputs and outputs. One of these modules includes eight microphone preamps, controllable via the Symphony software, that offer a substantial 85dB of gain.

The Burl B80 ‘Mothership’ is a chunky modular rack into which can be loaded any combination of four–channel A–D (BAD4) or eight–channel D–A (BDA8) converters, as well as the BCLK clocking module. Unlike most converters, the B80 aims not for absolute fidelity, but tries to inject a bit of analogue-style warmth into digital recordings, thanks to its transformer–balanced input modules.

The RADAR range of multi-track recorders has long been lauded for its ‘analogue-like’ sound, and the ADA II is iZ Technology’s way of offering the sound of RADAR’s converters to people who prefer recording to computers. It offers 24 analogue ins and outs, and comes as standard with a large, high-resolution touch-screen that provides access to metering, and configuration and routing settings.

Able to handle signals up to a whopping 384kHz sample rate, the AX32 can be configured, in groups of eight channels, to have either mic- or line-level analogue inputs, with up to 24 I/O in a single unit. When fitted with mic preamps, it can emulate Avid’s Pre interface, meaning you can control the input gains directly from within the Pro Tools mixer.

Designed for mastering applications, the 8X192 has eight analogue I/O and, unusually, a built-in summing mixer. Any of the eight analogue outputs can be fed to it, either in mono or as stereo pairs. Other features include a high-current headphone amp and an analogue monitor controller. The converter specs are also impressive: 120dB(A) for the A-D converter and 123dB(A) for the D-A.

DAD AX32From £3118, depending on configuration.

From $9507, depending on configuration.