Audiowiesel are a small fledgling company run by Austrian composers Frank Herrlinger and Daniel Szwedek. The pair created Hammered Acoustic Guitar, or HAG, as they refer to it, using an Ibanez AE guitar and beating it with drum sticks and brushes. The resulting samples are accessed through a series of Kontakt interfaces that include a number of sound-processing tools and offer seven velocity layers and nine round–robin variations per patch. Customers have the option of purchasing HAG Core and HAG FX & Percussion separately, or both together as the HAG Full Bundle. 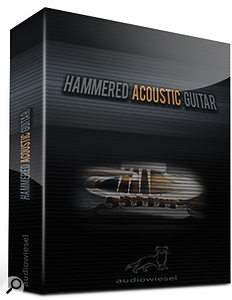 The Core interface is more sophisticated than the FX & Percussion ones. It enables up to two brush samples and two stick samples to be mixed together to form a patch. Balancing the four is done in mixer mode, however, there are also four settings pages from where the output of each sample channel can be altered. Controls include a low–pass filter, dynamic range adjustments, envelope controls and pitch tuning and transpose options. Alternatively, a Presets mode offers a selection of ready–made patches that are good to go.

The FX & Percussion interfaces differ in that they lack the multi–channel mixing abilities of Core, but instead benefit from a number of performance–related keyswitch options which make it easy to do things like select sounds, transpose the keys by an octave and choose LFO Sync fractions and multipliers, which reference the host’s tempo.

Although all of the FX & Percussion instruments are based on the same basic interface, Frank and Daniel have customised some of them so that they provide a few more programming options. For example, FX instruments have a MIDI gate density slider as part of their interface, unless they are labelled Tonal, in which case a random–detune slider exists instead. The Percussion interfaces, on the other hand, have a morphing slider that is clean at one end and distorted at the other.

But it is the Core instrument that is the more flexible. It is capable of sounding clean and simple if one or two channels are used, or rather complex if all four sources are active and given very different envelope, effect, EQ, pitch and range settings. For example, it can be made to sound like a spooky cimbalom reminiscent of the one used in The Ipcress File film soundtrack, which in my book is a very good thing! That said, a few more modulation options would help it compete with the most sophisticated rival instruments.

Without knowing where they came from it would be near–impossible to guess that the FX instruments were derived from hammering guitar string. They range from sub–harmonic thuds to synth–like tones, and could be used to underpin drums or for atmospherics effects in sci–fi sound design.

The Percussion instruments are similarly far removed from their origin. Audiowiesel have assembled a sort of electronic drum kit of sounds, including approximations of wood block, brushes and bongo. There is also an instrument called Dirty Slam Hits MW, which offers heavily processed and distorted sounds and has a key–operated MIDI gate for creating stutter effects.

To sum up, hitting an acoustic guitar has created a reasonably unique virtual instrument that will interest composers looking to expand their sonic palette. Tom Flint

Audio examples for the Sample Shop articles can be found here.