Can Chandler pack all of the EMI/Abbey Road sound for which they’re so famous into a single-module 500–series preamp?

It seems odd that one of the first high–quality British professional mixing consoles, which underpins so many famous rock albums, lives on as hardware only in the products of an American manufacturer. Nevertheless, the fact it does must be considered A Good Thing, because Chandler’s EMI TG–based products recreate this unique British design from the late 1960s and early ’70s remarkably well. I reviewed the company’s TG Channel back in January 2005 (www.soundonsound.com/sos/jan05/articles/chandlerchannel.htm), a product which uses the same EMI TG12428 preamp section as employed in Chandler’s rack–mounting TG2 preamp/DI, retaining the all–discrete silicon transistor circuitry and (virtually identical) input and output transformers.

The latest incarnation of this classic preamp design is Chandler’s new TG2–500, which, as the model numbering indicates, is a reformatted version designed for use in an API 500–series ‘Lunchbox’ chassis. Apparently this product was quite a while in the making before company owner Wade Goeke declared himself happy with the various compromises and practicalities of the physical re–modelling.

The TG2–500 is a single module–width unit that employs only the input and output connectors on the host 500–series rack, so it lacks the DI input facility of its rackmount antecedent, and there are a few other changes too. However, the rear–panel input can be configured for either mic or line–level signals via a front–panel toggle switch, allowing the preamp to be used as a ‘line conditioner’ if required. 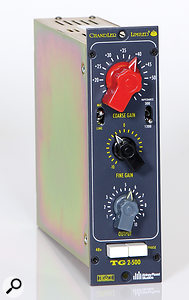 With just three rotary controls (all with nice chicken–head knobs), two toggle switches, and two push–buttons, the TG2–500 is pretty straightforward to use, although some status indicator LEDs would have been nice, even if not ‘authentic’. The top rotary switch has a red knob and sets the gain in seven 5dB steps, covering a 30dB range. This is rather different from the rackmounting TG2, which has a 15–position switch covering a much broader gain range. The middle (black–knobbed) potentiometer is also a departure from the TG2 preamp/DI and provides a continuous gain trim over roughly ±10dB to allow fine level adjustment, filling in the gaps of the coarse gain switch and extending the gain range in both directions. The bottom potentiometer has a grey knob and provides an output–level control, acting as an output fader, the same as the rack–mount unit. 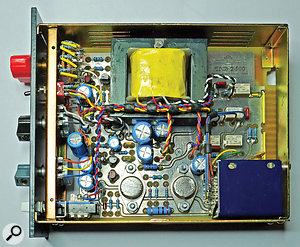 One for the electronics geeks out there...When switched to ‘mic mode’ the maximum gain, as marked on the coarse gain scale, is 50dB — which is what I measured with the Trim control centred and the output control at maximum. With the trim control turned up to maximum as well, a further 10dB of gain is applied, for a total mic gain of 60dB. If switched to ‘line mode’ the input sensitivity is reduced by 10dB. This means that with the coarse gain at minimum, trim centred and output at maximum, a 0dBu line input signal appears at the output at +5dBu. Turning the output control back to 6.5 on the scale establishes unity gain.

Increasing the input level results in gently increasing harmonic distortion, with the output stage eventually clipping at around +27dBu. This is reached with a mic input signal of –20dBu when operating at maximum gain and with the output control fully clockwise, or +12dBu when at minimum gain. This indicates a very usable headroom margin, plus the ability to back off the output control and increase the input gain to achieve overdriven effects. 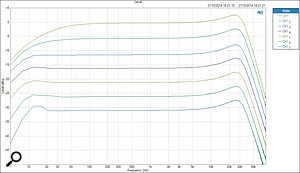 Here, you can see how the frequency response changes, with more harmonic distortion being introduced as the preamp is ‘driven’ harder.A second toggle switch, below the coarse gain control, changes the input transformer connections to offer two input impedances which are marked as either 300 or 1200 Ω. These derive from obsolete old–school impedance-matching practices, but according to my NTI Minirator 2 actually present 640 and 2200 Ω loads to the microphone. Nevertheless, they offer two slightly different tonal characteristics when used with dynamic and transformer–coupled microphones, which can be useful.

Two Neve–esque white push–buttons at the bottom of the module activate 48V phantom power and introduce a polarity inversion respectively. Sadly, and potentially dangerously to some connected line–level equipment, the phantom power is not disabled when the input is switched to Line mode, and without a status indicator it’s easy to overlook the fact that phantom power is switched on.

The rackmount TG2 preamp/DI model runs on internal ±24V supplies, whereas the 500–series racks offer only ±16V supplies. These reduced power rails theoretically limit the headroom, although there was no evidence of any problems during my tests and usage, as I’ve already suggested. The TG2–800’s specifications indicate fairly modest power supply demands, too, drawing 110 and 80 mA from the positive and negative power rails, respectively.

The input–stage circuitry appears to comprise two complementary pairs of BC214 (PNP) and BC184 (NPN) transistors, working in concert with the ‘free gain’ provided by the Carnhill input transformer. This is a relatively low–noise design which works perfectly well in most applications, but might not cut the mustard for distant, low–output ribbons! The output stage employs two chunky metal–canned output transistors (the type markings had been scratched off) in a push–pull configuration driving an Altran 4339 gapped output transformer.

This Chandler preamp could not be described as a ‘neutral’ preamp: it boasts a ‘larger than life’ sound with a full bottom end, a noticeable richness through the mid-range, and an open, airy top. For comparative purposes, I’d suggest the early Neve or Calrec preamps: all shared similar characteristics due to the similar discrete transistor circuitry and transformers. In short, everything is slightly exaggerated, but in a musically flattering way. The top–end lift is not harsh or aggressive, just ‘airy’ with a gentle rise above about 3kHz. This is largely courtesy of the output transformer, reaching a modest 2.5dB peak at 25kHz. The frequency response overall lies within ±1dB between 50Hz and 12kHz (at maximum gain), and the low end rolls–off gently to –3dB at 20Hz. The LF response extends further at lower gain settings, which is not unusual, although there’s no high–pass filter option on the preamp.

Usefully, driving the input stage harder than normal, by juggling the coarse gain, trim and output fader, allows the amount of harmonic distortion to be increased in a musically enhancing and very controllable way. The distortion tends to be mainly odd harmonics — the infamous ‘transistor fizz’ — rather than the rich thickness that’s more associated with valve electronics. The Chandler web site refers to John Lennon’s vocal on the classic Beatles track Polythene Pam as a good example of the kind of (heavily over–driven) distortion on offer here.

So, the TG2–500 is definitely a ‘flavoursome’ preamp which injects nice sense of character and body into what might otherwise appear sterile and boring sound sources. I’m not sure I’d want to use it for everything, simply because too much of a good thing can detract, but for vocals and solo instruments, and especially for bass guitars, I found it a very useful option to have in my Lunchbox.

A redesign of Chandler’s TG2 preamp/DI to fit a 500–series chassis. The new product lacks the DI input, and there are some other minor design changes, but the underlying sonic character remains as strong and attractive as ever.