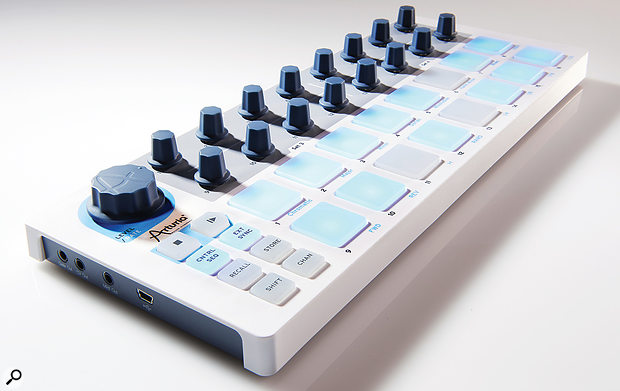 Arturia’s Beatstep combines a MIDI controller and a step sequencer in one extremely reasonably priced box.

Having broken free of the virtual world to build analogue synthesizers, Arturia continue to expand and consolidate their range. The Beatstep is a combined drum pad, MIDI controller and step sequencer eager to communicate with CV/Gate synths, MIDI hardware, the studio computer or iPad. In or out of the box, on of off stage, this tiny controller promises much and costs little. It sounds almost too good to be true.

The Beatstep is heavier than its tasteful cream–coloured body suggests. Measuring just 320 x 130 x 17 mm, the design is similar to the Spark LE drum machine, right down to the rubber buttons and charcoal grey encoders. The encoders are slightly notched and feel good, as do the backlit drum pads arranged in two rows of eight. In sporting pads with adjustable velocity response and polyphonic aftertouch, the Beatstep earns an initial rush of positivity. I spotted only one minor flaw: the grey, paper–like side coverings protrude slightly over the metal base. This feels cheap and vulnerable to being accidentally torn off.

Rated as a compact, assignable MIDI controller, the Beatstep would score highly, but there’s another side to its personality — that of a step sequencer. (The clues are in the name, the transport buttons and the labels printed beneath the pads.) Fortunately, the two modes co–exist peacefully, with overall control toggled by alternate presses of the Cntrl/Seq button. When in controller mode the button is red, while sequencer mode turns it blue. Other buttons provide external synchronisation, patch storage and MIDI channel selection, and we mustn’t forget the inevitable shift key, which is used to access features such as scale, sequence direction and speed. 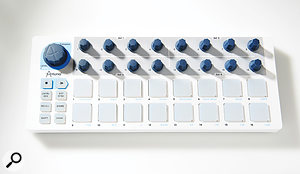 The Beatstep’s front panel measures a compact 320 x 130 mm.Due to the Beatstep’s sylph–like form, regular MIDI connectivity is not a practical option. Instead, there’s a 3.5mm jack, plus a short MIDI adapter packed in with the USB cable. Arturia provide only one of these adapters because there’s only one MIDI port, the output. This is a blow to those hoping for an affordable sequencer to slot into a hardware environment. Bi–directional MIDI is possible, but only via the mini-USB port and an attached computer. Since it’s a class-compliant device, the Beatstep is neatly plug and play. It derives power from USB and this applies whether connected to a studio computer, laptop or iPad. Fortunately the draw is light and my iPad Air handled it without complaint, which is just as well because there’s no stand–alone power adapter.

Lastly, and cementing the Beatstep’s ‘jack of all trades’ credentials, two 3.5mm sockets carry notes and gates to the outside world. Arturia have a nifty line in petite analogues and the Beatstep is ready to talk to them — or to any synth or modular that conforms to the Oct/Volt standard.

The pads and encoders are evenly distributed, making both finger drumming and knob–twiddling equally comfortable. There are 16 sequences and 16 sets of controller assignments stored for instant recall. Without a display to help, I couldn’t claim to remember every encoder assignment, but two or three complete configuration memories were sufficient for most of my soft synth tweaks. I only briefly wished for an old–school paper overlay to scribble on.

Let’s start by considering the Beatstep as a typical MIDI control surface. It arrives primed with a default set of controller and note assignments. Given that most virtual instruments have a MIDI Learn function, the defaults could be fine for quite a while. Eventually though, you’ll want to personalise them. All assignments are made in the MIDI Control Centre software and it’s a fair bet this will be the first download once you’ve registered your Beatstep and checked for updates. The MCC software requires little explanation, being instantly accessible and well organised. It permits the definition of CCs and NRPNs for the encoders, or a choice of notes, CCs, program changes or even MMC commands for every pad.

The software offers a number of acceleration curves to ensure this needn’t be one of those tedious encoder experiences where it takes a dozen spins to cover a single filter sweep. I couldn’t manage the full range in one go, but taking the ‘Fast’ option I was able to zip from zero to 127 in only two rotations and slow down enough for individual increments.

The pads feel great straight out of the box and although I was quite satisfied with their default action, four velocity curves are available to address different finger strengths. If I were being picky I’d mention that the polyphonic aftertouch wasn’t completely smooth across its 7–bit range. However, it’s hard to remain critical for long. Perched on top of my Yamaha KX8, a master keyboard low on knobs and entirely devoid of pads, the Beatstep began to look very appealing.

Flip into sequencer mode and you have a basic but effective simulation of an old–school step sequencer. The encoders set the pitch of each step over a four-octave range, while the cool blue pads act as step mute buttons. The main limitation is that the sequencer only sends patterns of notes, all at a fixed velocity. So there are no patterns of MIDI CCs to amuse the experimentally minded and lovers of 303–type sequences will have to cope without accents. Get beyond these omissions, though, and the Beatstep has a number of tasty features with which to spice up your patterns. 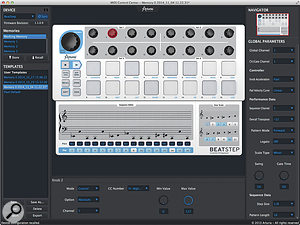 During playback, a progress light marches across the pads and there’s an easy visual correlation between pads and encoders. Here’s where those subtle notches become really useful because, unlike the fully variable tuning of a classic analogue sequencer, every notch represents a semitone. You therefore have a reasonable chance of setting intervals by feel as the sequencer loops. It can get ugly though, especially at speed, so it’s a good job Arturia included that most important of note–programming aids — scales.

Picking one of the eight available scales has no effect on the active sequence. Instead, it restricts the notes dialled up by the encoders. Assuming your base sequence is in C, selecting a major scale would mean the encoders only ever produce ‘white’ notes. The scales on offer are: chromatic (all notes), major, minor, dorian, mixolydian, harmonic minor and blues. Joining these presets is a single user scale. As you’d expect this is defined in the MCC where it appears as a graphical filter — blue notes are included, white notes excluded. I’d have preferred all the scales to be user–programmable, but perhaps that’s because I spent way too long spinning Frank Zappa records in my youth.

The shift key, in conjunction with the large data encoder, is used to transpose the current sequence. Again this is in semitones — down by a maximum of one octave, up by three. Transposition is real–time — ie. it can’t be prepared in advance and confirmed at a critical point during playback. It’s usually preferable to transpose with a MIDI keyboard, providing your DAW provides a friendly means of rerouting MIDI inputs and outputs (ie. not Logic). With no visual indication of the current key or transposition, it becomes natural to work by ear, discovering new patterns by the age–old method of random grabbing and turning. Whatever you come up with, up to 16 sequences can be stored internally to be archived at your leisure.

In order to make patterns more interesting, there are four playback directions: forwards, backwards, alternating or random. Step sequencers are all about interaction, so as well as the different directions, patterns can run at one of four different speeds, from quarter up to 1/32nd notes (triplets aren’t catered for). Lastly, at any time during playback, a pattern’s length can be reduced from its default 16 steps by holding down the Shift and Chan buttons and pressing one of the pads.

If you switch speed, length or direction, it’s likely you’ll get out of step with other material in your current song. Depending on the tempo, it might take a few attempts to get lined up again. This is something live performers need to be aware of and it’s a pity you can’t simply stop and start the sequencer while sync’ed to your DAW, as you’d expect to do in a purely hardware setup. Some kind of ‘resync’ function would be much appreciated in a future firmware update.

Not all the available functionality is accessible from hardware. Specifically, swing, legato and gate time (step duration) are only reachable from the MCC software. It seems an opportunity lost that you can’t program these into Beatstep’s controller persona. When legato is enabled, all notes are played as if they overlap and any two steps triggering the same note are merged. While this can hint at 303–type slides, the feature is seriously compromised without the option to set legato on individual steps only. I guess that’s another request.

Patterns can be freely routed to virtual instruments, MIDI hardware or the CV/Gate outputs but it’s perhaps less obvious that the Beatstep can serve as a MIDI to CV converter. Fortunately, it requires no more effort than routing a chosen DAW track to the Beatstep’s virtual port, which is then neatly forwarded on to the CV/Gate and/or MIDI output.

Naturally the sequencer continues playing when you switch to controller mode, providing the opportunity to capture long, gradually evolving patterns and simultaneous parameter tweaks. With the Beatstep sync’ed to Logic and U–he’s Diva firing on all cylinders, I came scarily close to the experience of analogue hardware noodling; with the added advantage of going back over it later to fix cock–ups and add individual accents and slides.

The Beatstep is a tasty and compact controller for MIDI tweaking and drum programming. Making it a step sequencer too — even one so basic — is a master stroke! Admittedly its patterns are of fixed velocity and the sequencing of MIDI CCs has been omitted, but within limitations, you’ve got a ready source of inspiration ripe for further development in your DAW. Certainly, the technique of spinning encoders and switching scales should lead to patterns in complete contrast to anything you’d play on a keyboard. And having chanced across a sequence that takes your fancy, with the press of a single button, the same interface is ready to tweak filters, envelopes and effects.

For a modest outlay this creamy little Arturia ticks so many boxes it’s hard to resist. It’s a shame there’s no MIDI input, but I doubt external sync will be an issue for the bulk of users working mainly in a DAW environment. Ultimately, if you’re a laptop performer in the market for drum pads, a flexible control surface and a hands–on step sequencer, the Beatstep could be exactly what you’re looking for!

For a similar price, Akai’s MPX8 offers eight pads and no sequencer or programmable encoders, but does add sample playback. Other controllers from Korg and Akai provide inexpensive drum pads too, but if you want the full Beatstep package there’s currently nothing to beat it.

An ideal DAW companion whether for its controller features, those handy drum pads or the simple step sequencer. With its capabilities extending to MIDI and CV synths, only the lack of external sync prevents it being an impulse buy for hardware–only users too.