Looking to improve the sound of your live vocals? One of these premium mics from US company Audix might be just the ticket. 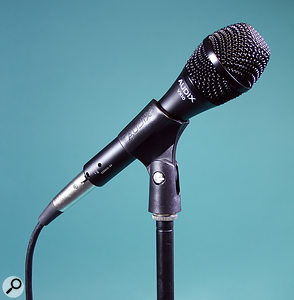 I've used Audix's dynamic stage mics on a number of occasions, and have always been impressed by their performance. However, they also manufacture capacitor mics, which inherently have better high-frequency performance than typical dynamic models.

First out of the box is the supercardioid VX5, a multi-purpose microphone designed for live, studio and broadcast applications. Though it's primarily sold as a vocal mic, Audix say that the VX5 also works well on guitars, wind instruments and percussion. This particular model, which is a back-electret design, looks on paper to have little more high-end extension than a typical dynamic model, with a frequency response of 40Hz to 16.5kHz (±3dB). We're told that it is designed to have an accurate sound with very little in the way of a presence lift, good resistance to feedback, and high SPL handling — the latter two attributes being something you certainly need on your side when working live. Phantom power in the 8-52V range is required for operation, and sensitivity is 5mV/Pa.

The back-electret capsule uses a 14mm-diameter diaphragm with an evaporated-gold conductive layer. This is protected by a robust steel mesh grille that is acoustically ported, and which also incorporates a multi-stage pop filter. Unscrewing the basket gives access for cleaning, and also reveals a smaller internal basket with a foam cap that is permanently fixed over the capsule. Features include a 10dB pad and a bass roll-off filter, both operated by slide switches recessed into the slim metal body. A fabric pouch and stand clip are included.

SPLs in excess of 140dB can be accommodated with the pad and filter switched in, while the tight polar pattern is claimed to give over 20dB of ambient noise rejection on a typical live stage. Overall the mic is beautifully engineered, though I'm a little concerned that the slim body shape might tempt some singers to hold it too close to the basket, partially covering the rear ports and disturbing the polar pattern.

More costly than the VX5, the VX10 microphone is the elite model of the range, with a response rivalling that of studio mics and extending from 40Hz to 20kHz. This time the polar pattern is cardioid, the capacitor capsule is externally polarised, and the diaphragm is slightly larger than the VX5's, at 21mm in diameter. The overall styling of the mic is otherwise similar to that of the VX5. It is also available in a low-output version called the VX10 LO, for use at louder stage volumes or with unusually powerful vocalists. The standard model has a sensitivity of 24mV/Pa.

Again, the VX10 can do double duty on guitar, wind and percussion, though there are no pad or filter switches on this model. There's also no second internal basket, as the larger capsule doesn't leave space. One significant difference to be aware of, and one that caught me out until I read the spec sheet in full, is that while the VX5 is happy to run on low phantom power voltages, the VX10, being an externally polarised design, needs a full 48V, so it is not suitable for use with some acoustic guitar combos, specifically those that deliver 24V phantom power. The VX10 comes in a wooden box with a stand clip. 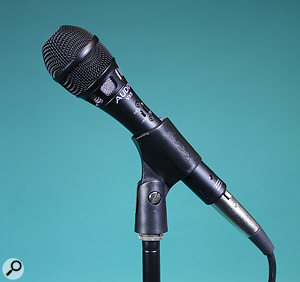 Taking the VX5 first, this has a more open sound than most dynamic mics, and also delivers a strong but not muddy low end. It has a slight tonal crispness to it that helps with clarity, but the highs still have an open and natural character. My impression is that its tonality sits midway between that of a good dynamic model and a studio capacitor mic. With my acoustic guitar amp, which has a very clean vocal channel and supplies 24V phantom power, it sounded just the way I'd want a live mic to sound: full and balanced but very clear. Handling noise is impressively low and there's no obvious susceptibility to popping during normal use, so the extra inner basket and foam clearly do the trick.

I couldn't test the VX10 in the same way, however, as it requires full-fat phantom powering. Plugged into a preamp with 48 Volt phantom powering, the mic sprang to life and performed as it should. It has more of a studio-mic quality than the VX5, with a noticeably more airy high end and greater sensitivity. It does, however, seem a little more susceptible to popping when used close up, presumably because the VX5 has the benefit of the dual-basket construction. It's no worse than many other live mics in this respect, and a low-cut filter on the desk would probably tame it, but the VX5 just happens to be particularly good when it come to pop rejection.

These are both very capable mics and, importantly, they're also built to last. Though they cost rather more than typical dynamic models, these mics will repay you with greater clarity and a more natural sound. The VX10 comes closest to what I think of as the studio mic sound, and indeed would be perfectly happy in a recording environment, so it could well be a practical choice for those who both gig and record, or for engineers needing a high-quality mic for live recording sessions where the vocalist is singing in the same room as the band.

Handheld capacitor mics are available at all prices, from the affordable LD Systems LD1011 and Prodipe MC1 models to more costly capacitor designs from the likes of Rode, SE, Shure and Sennheiser.

These are both professional-grade live mics and would represent a worthwhile investment for those whose PA systems are good enough to show up the differences between microphones.