Avantone have added on‑board amplification to their contemporary take on the classic 'Horrortone' secondary monitor, and the result is something quite special... 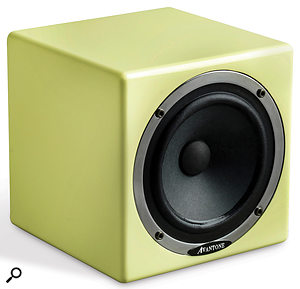 These little speakers are the new active versions of Avantone's original passive MixCubes, as reviewed by Paul White back in SOS April 2007. Both sets have been consciously designed to update the design of one of the most celebrated mix reference speakers: the now discontinued Auratone 5C Sound Cube. The Auratone's distinctive little single‑driver box was (and still is) a fixture in many top mixing studios, and the reason typically given for this is that it provides an approximation of lesser‑quality consumer playback devices such as radios and televisions. However, the same could equally be said of many cheap speakers, and there are specific reasons why the Auratone is actually head and shoulders above most of them in terms of usefulness.

Firstly, its frequency response is very heavy on the mid‑range, which is the section of any mix that is most likely to survive to the listener: a comparatively limited number of playback systems manage serious low‑frequency output, and high frequencies are very easily lost if a playback device is heard off-axis or acoustically shadowed. The result is that if you get your balance right on an Auratone it's much more likely to translate across a wide range of speaker systems, both lo‑fi and hi‑fi. What's more, the speaker's ability to communicate relative balance information about a mix is exceptional. One reason for this is that there are no crossover artifacts and fewer inter‑driver phasing issues if you move around the monitoring room; and if you listen to a single Auratone in mono, as many engineers do, you get further advantages of no inter‑speaker phasing, a real image for all instruments (easier to balance than the phantom images of central instruments on stereo speakers) and a free mono‑compatibility check! The other main reason for their unbeatable balancing ability is that their sound is less affected by time‑domain smearing, both because the infinite‑baffle cabinet design has fewer resonances than most ported designs, and because its limited frequency range interacts very little with low‑frequency room modes. 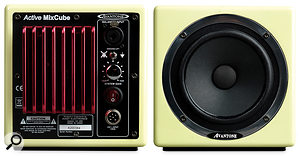 The rear panel of the Active MixCube is dominated by the on-board amplifier's heat sink.However, despite the Auratone's time‑proven design, Avantone have not been content simply to replicate it, but have instead taken it upon themselves to try to improve it — perhaps not that surprising a move, given that the 5C, useful as it is, has long borne the nickname 'Horrortone', because of its unattractive, middly tone. The updates have included making the box more solid, using 18mm MDF panels, and more cosmetically attractive (in a retro kind of way); specifying more durable driver materials with more linear audio response; and now adding in a 60W amplifier for self‑powered operation. Which brings us back to the product under review here!

The Active MixCube has all its connections at the rear, next to a big pink heat-sink. Audio arrives via a balanced combi/jack/XLR socket, while mains (30V DC) comes in on a six‑pin locking connector from an almost comically hefty 2kg line‑lump power supply — the speaker itself only weighs 3.5kg! A small switch allows you to separate signal and mains earths if you're getting earth-loop problems.

The Sound Of Horror? 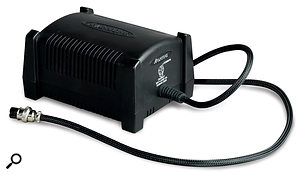 For those who already appreciate the qualities of the Auratone 5C, there's a lot to like in this new Avantone variant. I've used a number of different 'grotbox' monitors in my time, but this design, just like its progenitor, is pretty much peerless when it comes to balancing the main body of a mix, and I can't think of any speaker I'd rather use for carrying out critical lead‑vocal automation tasks than this. The lack of resonance makes it brilliant for gauging snare levels, but it's surprisingly effective for judgements of bass consistency and kick/bass balance too, which is something that many people don't realise: the upper frequencies of these instruments need to be clearly audible on this speaker if they're going to translate to small systems, so you can judge the balance without room modes affecting your judgement, even in comparatively untreated acoustics.

It's also nice to report that Avantone's improvements are decidedly more 'new Mini' then 'new Beetle'. Although I didn't have an original 5C on hand for side‑by‑side comparisons, the MixCube seems significantly less horrific, but while still maintaining that honky mid-range focus that is so essential to the job it performs. In particular, I noticed my ear acclimatising to the MixCube's sound more easily than it did to the original 5C, which makes me suspect that Avantone's higher‑spec materials and improved damping scheme have reduced some of the original's small‑scale frequency‑response ripples. 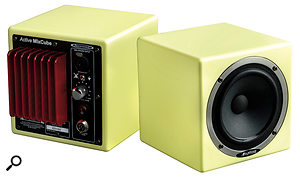 CaptionWhat also struck me was the cleanness of the Avantone sound in terms of distortion, as compared to the Auratones I've used or, indeed, any affordable ported speaker. This was most noticeable in the low frequencies — pure tones just progressively dropped off the map below about 150Hz, and there was no sense that misleading extra harmonics were being added to the low end of real‑world musical material either. This characteristic, allied with the transient speed of the light, reinforced‑paper cone and unported enclosure, made the MixCubes extremely revealing of any distortion within the programme material itself.

Whether these aspects of the improved performance create a more useful product overall, however, is perhaps open to question if you viewed the lo‑fi part of the Auratone 5C experience as crucial. Personally, I've always thought that the 'grotbox' argument was a bit of a red herring in the first place with respect to the 5C, so I'm very positive about the new direction that Avantone have taken, and I would certainly prefer to work on the MixCubes than on any of the original Auratones I've heard. However, while the cleaner MixCube sound is a dream for balance judgements, the same attribute makes it less useful as a lo‑fi reference, so I'd feel more inclined to cross‑reference my mixes on a few true real‑world systems to retain more insight into the impact of distortion and resonance issues further down the line.

As Avantone are at pains to point out, however, this speaker is not designed to do everything on its own, but to complement other studio monitor hardware that can't deliver the same specialist mix‑balancing capabilities. On these terms, the MixCubes are an essential product for anyone serious about mix engineering, and this reviewer, for one, will be voting with his cash.

As I've explained in the main article, the Avantone MixCubes (and indeed the Auratone 5C Sound Cubes before them) are more than just lo‑fi grotbox speakers. As such, it's actually quite difficult to find technically comparable products, mostly because almost all other small single‑driver active speakers are ported to increase their apparent bass response. There are a couple of similarly priced active talkback speakers I have come across that can be pressed into service: the Fostex 6301 and Canford Audio's Diecast speaker. I've used the Canford Diecast as an Auratone substitute for a number of years now, but its smaller driver is voiced quite bright (for talkback intelligibility) and its distortion performance isn't particularly good, so while the Diecast might be better as a lo‑fi reference, the Avantone is clearly superior for balancing purposes. If passive monitors might be viable for you, you could also take a look at the unusual Pyramid Triple P or, indeed, hunt around for a second‑hand pair of Auratone 5Cs on eBay — but be sure to compare the pricing with the passive MixCubes!

A classic monitor design has received a hi‑spec modern make-over that significantly improves its usability as a balance tool. Nonetheless, the product may still divide opinion amongst engineers familiar with the Auratone 5C.