In percussive terms, the adjective 'cinematic' currently translates as big, boomy drums from all corners of the globe: African shakers, timpani, ethnic hand-percussion, grandiose orchestral bass drums and rattling, send‑in‑the-Marines military snares. And that's exactly what you'll find on Big Fish Audio's Cinematic Percussion, which is a 2.6GB collection of loop-based performances by drummer and percussionist MB Gordy. Given this musician's experience as a movie soundtrack session player, it's no surprise that the library's 30 construction kits sound like backing tracks to blockbuster film cues. 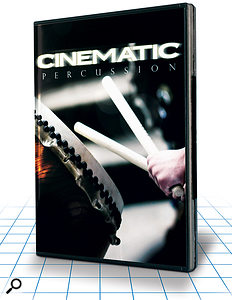 Mr Gordy has an orchestrator's ear (two, even), as evidenced by his imaginative sonic choices. 'Waterphone' layers high-pitched bowed crotales over nicely played tabla and Indian frame drums, and an underlying beat played on a talking-drum-esque Pakistani kanjira. The mood is light, yet ominous; the pulse irresistible. I also appreciated 'Perkolarity', an urgent, unpredictable and dramatic piece, which features some great Korg Wavedrum noises underpinned by the gentle but insistent rhythmic thrumming of damped guitar strings hit with soft percussion beaters.

Beautifully recorded, low-pitched taikos, frame drums and orchestral bass drums abound, adding portentousness and a bottom end of epic proportions. Though many pieces have a strong ethnic flavour, they avoid geographical stereotyping by mixing instruments from different regions. The Middle Eastern dumbek goblet drums of 'Desert Oasis', for example, are nicely complemented by Indian tabla. Purists may object, but the results are original and very effective.

These ethnic-sounding grooves are augmented by one or two spacey soundscapes and a few pieces propelled by militaristic orchestral snare and timps. A drum kit pops up occasionally. On 'Free Form', Gordy jams along on drums to a swingbeat conga groove, resulting in a pleasantly open, evolving and spontaneous feel you don't often hear in sample libraries. While the loops are rhythmically well co-ordinated, you might want to quantise some elements if you were using them in a pop or dance track. Each kit is presented as a stereo mix (including reverb), plus the single-instrument elements (minus reverb) used to create it, which range from one-off hits to extended rhythm patterns. These elements are presented in Apple Loops, Acidised WAV and Recycle formats, and can also be imported into Stylus RMX.

Cinematic Percussion is a high-quality, varied and well‑organised library offering tons of good material. Each piece has a strong atmosphere but, crucially, they all leave space for composers to add musical layers. I wished the WAVs had also been presented in a sampler format along with MIDI files. However, programmers can use the Recycle REX files to export the highly usable single hits into their samplers, a labour of love that, in this case, would be well worth the effort. Dave Stewart