The ability to mount mics on drum shells is nothing new, but actually being able to build them into the shells, as you can with the Finnish Ukko system, is not so common. Could this alternative method put an end to multi‑miking of drum kits? 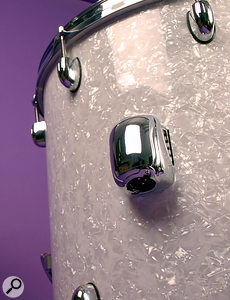 Finnish company B-Band specialise in pickups for acoustic guitars. Their OEM (Original Equipment Manufacturer) products are found in many popular guitars and if you're a serious six‑string collector, chances are you're already a B‑Band owner. The company's Ukko range (the subject of this review), though, comprises contact mics that stick to the inside of the shell of a drum. They connect via a flat cable that's fed through the drum's vent, or a specially drilled hole, to a phantom‑powered preamp unit. From there, the signal is delivered to a standard mic preamplifier via a regular XLR mic cable.

There are three different types of Ukko drum mics: one for bass drum, one for snare, and one for toms of all sizes. The Ukko pack reviewed here comprises five mics, for bass drum, snare and three toms. They all use the same mic (a specially designed contact pickup, to be more accurate), but the included preamp units have switchable EQ settings tailored for their intended application. Each preamp — a silver box the size of an E-bow — is mounted on the outside of the drum, either using a clip that attaches to the rim, or by bolting it to the shell, using the vent or custom‑drilled hole as a conduit for the cable and the fixing bolt. Cymbals, however, aren't catered for by the Ukko range. Conventional overhead or spot mics will still be required for these duties and any percussion, such as cowbells, you may use. 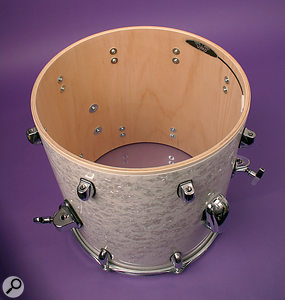 In this picture, you can see how the Ukko mic is attached to the inside of a drum. The inset shows the mic in more detail.

The Ukko Pack requires self assembly, and the installation instructions state that the contact mic, which comes backed with an adhesive pad, should be stuck approximately 6mm from the edge of the drum shell nearest the batter head. This requires you to take the top head off and clean the inside surface of the shell where the mic is to be affixed (I used alcohol‑soaked swabs that you can buy from a chemist). Once installed, the system is relatively unobtrusive and, if bolted through the shell (as opposed to being rim‑mounted), you barely notice it's on the drum. The weight added to the drum is negligible.

When I was installing my kit, I found that (annoyingly) the vent hole on the smallest tom of my Gretsch kit was not the same size as that on my Tama snare, or, oddly, even the matching Gretsch bass drum. This meant that the preamp unit couldn't easily be bolted to the outside of the tom's shell. B‑Band's advice in this situation is that you cut away the flange from the shell‑side surface of the plastic housing — but I was reluctant to hack at the brittle plastic and decided to rim‑mount that particular preamp.

In total, the installation of the Ukko mics into my four‑piece kit took less than two hours, and this included re‑tuning the drums after fitting the mics and preamps.

I have to say that I was sceptical about the use of contact mics fixed to drum shells. I have a Schertler contact mic that works wonders on tonal, acoustic instruments, and the only sound I have ever obtained from that, when attached to a drum, is a sharp crack, which I found next to useless for conventional applications — so when I first heard the Ukko mics I was pleasantly surprised. There's an astonishing amount of sustain to the drum 'notes', and the attack isn't as harsh as I'd anticipated. This is because the Ukko mics are a little different to existing contact transducers.

As part of the review, I simultaneously recorded a few minutes of drum performance with signals from both the Ukko mics and a conventional close‑mic configuration. A single crossed pair of small‑diaphragm condenser mics took care of overhead duties. As I expected, the stand‑mounted mics provided a result that, with a little dynamics processing and EQ, could be used on a track. In comparison, the Ukkos by themselves required very aggressive tonal adjustment, which still didn't yield the accepted 'drum kit' sound heard on pop and rock records.

Even after tweaking the Ukko's on‑board EQ settings, I found that, to get anywhere close to that accepted sound, I had to make some fairly drastic changes to the tuning of the drums. I practically had to tune the kit to the mics, rather than adapt the placement and combination of recording equipment to suit the instrument, as I would when using conventional close‑miking techniques.

However, separation was second to none, due to the nature of the Ukko transducer and where it's located, although sympathetic resonance (when the snares rattle following a kick-drum hit, for example) could still be heard. 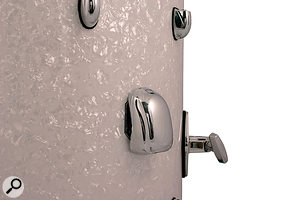 The rounded chromed preamp is pretty unobtrusive, even when attached to the outside of a drum.

Unconvinced by the direct sound from the Ukkos, I experimented with the simultaneous recordings and found that the signal from the Ukko mics could be used very effectively in tandem with the standard mics. Taking the two kick‑drum signals, I drew a downwards ramp in my EQ plug‑in (applying boost to the extreme low end and heavily attenuating the high frequencies) on the Ukko channel, then mixed in the signal from the AKG D112 I'd placed in the hole of the drum's resonant head. The result was an astonishingly up‑front, if slightly unnatural, sound: the dynamic mic provided the attack, while the Ukko added a very low thump. Similarly, with the snare setup I sent the Ukko's top‑heavy signal to an exciter and blended it with the overly meaty sound of the Sennheiser MD421 I'd pointed at the batter head. This gave a rugged sound, both punchy in the low-mids and just brash enough to cut through a mix. I was expecting to have to adjust the relative phase of the two signals, but I found that, after doing that, the results worked just fine — and a mono‑compatibility check and careful observation of phase‑correlation meters confirmed this.

Although I didn't consider the Ukko Pack a one‑stop drum‑miking solution for recording work, I can see that they could be a very handy addition to a studio's in‑house drum kit. Like putting top and bottom mics on toms and the snare drum, and sticking spot mics in nooks and crannies between drums, they offer another angle for the engineer to consider when polishing and enhancing the drum sound. Especially useful where stand‑mounted mics aren't in plentiful supply, the Ukko contact mics help to add an extra dimension to the standard drum‑kit mic setup, with the convenience of internal mounting. The potential for their use as triggers with drum replacement software, or the audio‑to‑MIDI functions in many DAWs, give the Ukko mics yet another reason to be on the shopping list of engineering drummers and studio managers.

The CDS by C‑Ducer (www.c‑ducer.com) is a very similar system to the Ukko range, and an equivalent setup would cost about $150 less than the Ukko Pack. There are a number of in‑drum mic mounting options, DW's May System (www.dwdrums.com/may) and the Kelly Shu (www.kellyshu.com) being just two, but these rely on the user already having mics for the internal mounts.

The Ukko contact mics work extremely well for providing signals to trigger virtual drum instruments. Thanks to the defined attack and, more so, the excellent separation produced by the mics, audio‑to‑MIDI functions found in most modern DAW applications can be applied to recorded Ukko signals to derive MIDI data, which, in turn, can provide the note and velocity information for 'virtual drummer' software. Because these signals will have stemmed from a human on an actual drum kit, the playing realism should be as good as it gets.

Drum‑replacement lovers will also find the Ukko mics useful. It's common in commercial pop and rock music, if the drums are considered 'weedy', for the original drum tracks to be copied and processed to create short, sharp hits that act as trigger data for software. Perfectly time‑aligned samples are then mixed with the original kit recordings, for a punchier, more 'produced' result. But recording the drums with both conventional mics and the internal Ukko pickups in place would cut the post‑production time down considerably, and because modern drum‑replacement applications can operate in real time, drum replacement can be done live! Amazing.

B‑Band say that when you mount an Ukko system inside a bass drum, the back head should be fitted to allow the drum to properly resonate, enabling the Ukko mic to capture all of the drum sound. Before getting hold of the Ukko Pack, I was a staunch advocate of the single-head approach: batter head on (of course), resonant head, lugs and hoop off. The main reason for this is that I like my kick drum to emit a solid, funky thud, rather than a boom or a splat (achieved with some heavy damping), but the lack of resonant head also allows almost unhindered access for miking.

To properly test the kick system, I felt that I should re‑apply the resonant head. In the product literature, the manufacturers say that a hole can be cut in the resonant head. The smaller it is, the better (in order to maintain pressure in the drum), so I opted for a four‑inch cut‑out, which allowed me to locate my kick-drum mic of choice almost where I normally would if miking without the resonant head on. To get a satisfactory sound from the drum, both acoustically and from the Ukko pickup, I had to wind the lugs really tight, and damp the inside of the drum even more heavily than I normally would — but eventually I found a sound that I was happy with, with both heads on and the Ukko performing well.

The Ukko Pack is a good addition to a studio kit and is very useful for drum enhancement, triggering and replacement — but I wouldn't suggest you flog all your existing mics in order to buy it!