One of the more novel guitar accessories I saw at this year's Summer NAMM show was the Bob Kilgore Harmonic Capo, which is a simple but ingenious contraption that sits over the 12th fret of a guitar in such a way that open strings play a harmonic but fretted notes play (more or less) normally. Mechanically, this device is rather like an old‑school elastic capo, except that its plastic 'shoulders' allow the upper part to sit over the strings, rather than pressing down on them. This upper part of this device comprises a wire loop that supports six rubber pads, which can be pushed down until each just touches the string, producing the desired harmonic. When you fret a string, it is pushed down, and away from the rubber fingers — so it plays normally. When I say 'normally', there is one caveat: if you have your guitar nut cut to give you a low action over the first fret, or if the guitar has a very low action overall, then the bottom two or three frets of the instrument may not play normally because the strings aren't pushed far enough from the capo's rubber fingers to avoid being partially damped, especially on the lower strings. Even so, there's a lot you can do by working higher up the neck. The capo fits any normal neck‑width guitar where the 12th fret is not over a neck heel or body joint, and it can also be used in conjunction with a standard capo as long as the fret 12 frets up from the conventional capo's position is accessible for fitting the Harmonic Capo. 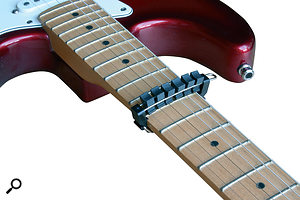 While the capo works well in standard tuning, it can sound even more impressive when using open tunings such as DADGAD, and because each rubber pad is separately adjustable for height and spacing, it works equally well on electric and acoustic guitars. You could also remove some of the pads so that only certain strings perform the harmonic trick — or you could even try the capo over other harmonic points on the guitar, such as the seventh or fifth frets, as you can still finger either side of it. Sensibly, replacement rubber pads are available, because you're more likely to lose them than wear them out.

Fitting and adjusting the capo is pretty straightforward, and takes only a minute or so, after which time you can start to experiment in earnest. On my electric guitars, I experienced some of the aforementioned choking on the bottom few frets, but the effect is most impressive when you play higher up the neck, and then pick or hammer‑off to open strings to get those glittery harmonics. The Harmonic Capo is a useful, yet inexpensive studio tool because it creates a very different musical texture with little change in playing style, and harmonics always sound great with effects such as delay or reverb. If you're keen to lean more, visit the web site (details below), where you can see the capo in action, order one of your own, and even buy Bob's records, on which his Harmonic Capo is featured quite extensively. Shipping outside the United States costs $6.00 ($2.00 for each additional capo), while the capo itself costs $35.95 — and for just $10 more you get all three of Bob's albums thrown in! So, all in all, this is a novel and inexpensive way of creating some truly intriguing performance effects. Best of all, it is likely to spark off new musical ideas. Paul White

This interesting device allows you to generate and control harmonics, while leaving your fingers and/or pick free to play normally.