Back in 1977, Scottish company GR International Ltd, which was owned by two brothers who both happened to be musicians, designed and manufactured a rhythm machine called the Powerhouse. The company, who also manufactured cassette recorders for hi–fi music centres, designed the Powerhouse to take eight–track cartridges loaded with drum loops, apparently performed by a top session drummer. The loops could then be subjected to a degree of processing using the Powerhouse’s controls, which included a tempo control and a balance knob for mixing two related rhythms. 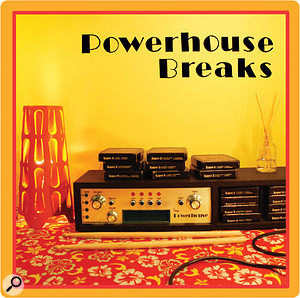 The first thing to say about the library is that it is very lo–fi. All the recordings come with a fair amount of hum and crackle, although it doesn’t get in the way too much. Under the hum and crackle the recordings are rather dead-sounding by today’s standards; as if they were recorded in a concrete basement with carpeted floor, walls and ceiling! Perhaps the mic setup was quite basic too, because there isn’t much detail in the kit sounds either, and it’s possible that the source tapes degraded over the years. Whatever the causes might be, the resulting library sounds like some slightly worn old LP of the kind that hip-hop producers spent their time sampling back in the 1980s. For many producers, that’s a very good thing!

For his library, Dan decided to abandon the order on the original cartridges and followed a simple folder structure. For example, 4_4 Breaks gathers anything written in 4/4; Other Time Sigs_Feels is a collection of miscellaneous rhythmic loops; Cheesecake features drums with a militaristic feel, while the With Percussion and Solo Percussion folders contain loops from the Latin cartridges, which were performed by three percussionists and include bongos, shakers, wood blocks and guiros. On the original Powerhouse machine it was possible to mix two related loops, so Dan has sensibly kept the relevant pairs together in the folders and labelled them in a way that makes their relationship clear. Mixing the pairs is a great way to create movement and dynamics in rhythm tracks.

In terms of variety it would be nice to have more rock and pop options, although the Motown Slowbeat, Funky Beat and Twist loops, amongst others in the 4_4 Breaks folder, could all be used in those genres.

Sound designers working on projects requiring authentic vintage sounds are likely to take a lot of interest in this product, as will any pop or hip-hop producer looking for breaks with a lo–fi analogue character. Without doubt, it’s worth taking a look. Tom Flint