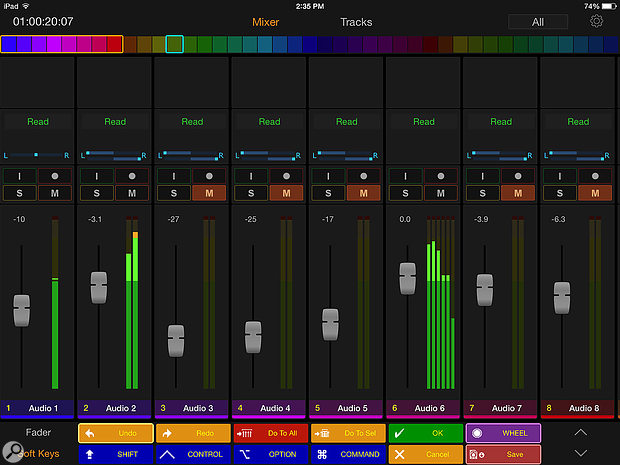 Following companies like Apple, Steinberg, and PreSonus, who have released apps that allow you to control Logic Pro, Cubase and Studio One respectively from an iPad, Avid recently followed suit and introduced an iPad remote app of their own: Pro Tools Control. While this wasn’t particularly surprising, it was perhaps unexpected and interesting that such an app would both be free and use the company’s Eucon protocol. Therefore, in addition to controlling Pro Tools, as the app’s name implies, Pro Tools Control (PTC) is also compatible with other host applications that support Eucon. Avid say that while PTC might indeed work with any Eucon–enabled application, the ‘qualified’ list currently includes Pro Tools 12.1, Logic Pro X, Cubase 8 and Nuendo 6.5.

Avid’s web site states you need a minimum of an iPad Air or iPad mini 2 running iOS 8.3 or later; however, on the App Store, the compatibility requirements are listed as “iPad” and “iOS 8.0 or later”. So while PTC might run on older iPads, be aware that you may not have the smoothest experience.

When you run PTC for the first time you’ll be prompted to sign into your Avid Master Account and complete a brief–but–tedious registration process. A cynic might suggest this registration process is the actual price you pay for PTC, ensuring that all previously non–Avid customers now have an Avid Account. But it turns out this is a necessary step: the only way you can download the required EuControl software for your host computer is by having a Eucon product registered in your Avid Account.

The EuControl software is available for both Mac and Windows. Avid’s knowledge base recommends Mac users to be running OS 10.9.5 or 10.10.2 or higher, while Windows users can happily use Windows 7, 8 or 8.1. At the time of writing, shortly after the app’s release, Eucon was not supported on Windows 10. Assuming your iPad and computer are on the same network, and the iPad is running PTC, your iPad should be listed in the Surfaces tab of the EuControl Settings window. I noticed the connection dropping a few times, but it would usually return by simply quitting and reopening the app.

PTC’s interface is split into three sections: the Tab bar along the top, the Mixer view in the middle, and the Toolbar along the bottom that shows transport controls by default. At the top left of the Tab bar you’ll see the Counter, which shows the Main Counter by default, and you can toggle between that and the Sub Counter by tapping it. A couple of points: firstly, the Counter is so Lilliputian that it almost seems like an afterthought; also, surely there’s enough space on the iPad’s display to give one the option of displaying both Main and Sub Counters simultaneously?

The Tab bar also incorporates what Avid term the Universe Scroller, where each available track in a Session is represented by a rectangle of its assigned colour. An orange outline indicates the track range currently shown in the view below, and you can either drag or tap in the Scroller to change the visible range. The currently selected track is, rather handily, outlined in bright blue, making its location easily spottable.

The Mixer view provides a familiar row of eight channel strips, each featuring a track name (which you tap to select a track), fader, level meter, pan and automation controls, as well as input monitor, record, mute, and solo buttons. Tapping the pan or automation setting opens a popover with either horizontal faders for the pan controls or a list of modes for automation. Double–tapping the horizontal faders centres them (which is handy, though slightly bizarre since double–tapping the vertical faders doesn’t set them to 0dB as you might expect). If a track is routed to a surround output, there’s no surround pan control option, which seems like a missed opportunity. And if a track is routed to a surround output and then routed back to a stereo output again, the pan control seems to stay asleep and you need to step out and back into the app to wake it up again. 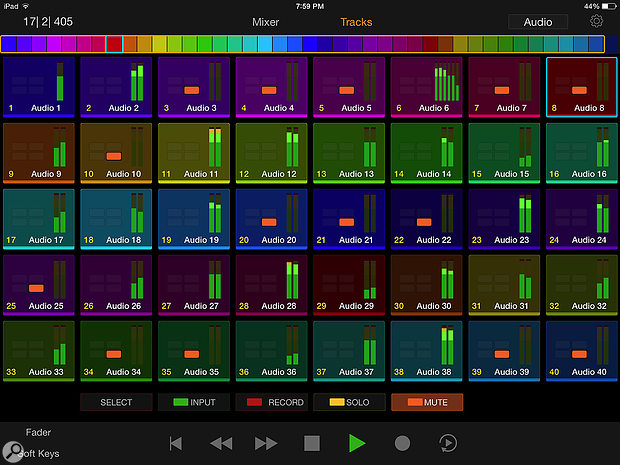 PTC’s Tracks view gives you an overview of up to 40 tracks at once.

In addition to offering the conventional Mixer view, there’s also a Tracks view that’s similar to the one used on Avid’s Artist Control surface, showing an overview of up to 40 track tiles at a time. Each tile shows the track name and offers a level meter, along with an indication of input, record, solo and mute status. Below the tiles are five function buttons that set what happens when you tap a tile, whether the track becomes selected, muted or soloed, or put into input monitor or record.

You can set what Track Types are currently displayed in either Tracks or Mixer views by pressing the Track Types and Layouts button in the Tab bar. You can choose to show All Tracks (which is the default), or define different combinations of Track Types, which can then be stored as a Layout via the EuControl software.

Multiple pages of Soft Keys are available, and each Key is fully configurable in terms of colour, text, icon and what command is triggered.

Last but not least, there’s the Toolbar at the bottom, which, as I mentioned, shows the transport controls by default. By tapping the Soft Keys Button, you can switch to a set of 12 Soft Keys like those previously seen on Artist Control. Multiple pages of Soft Keys are available, and each Key is fully configurable in terms of colour, text, icon and what command is triggered. Such adjustments are made in the Soft Keys tab in EuControl Settings, and I would direct you to the review of the Euphonix MC Control (the name of the aforementioned Artist Control prior to Euphonix being acquired by Avid) in the SOS January 2009 issue for more details.

In use, it did feel as though the Toolbar would benefit from having a few more vertical pixels. The Soft Keys in particular can be hard to target unless the iPad is right in front of you, and I shudder to think how they would look on an iPad mini. Also, it would be great to have the option of having the Soft Keys and transport controls visible at the same time, since having to toggle between them limits their ability to speed up your workflow.

The Toolbar also has a button labelled Fader, and tapping this toggles the visibility of a floating channel strip for the currently selected Channel, which is particularly handy in Tracks view. You can move this anywhere you like by tapping and dragging the track’s name, although the default, far–left position is probably where most will leave the strip as it’s above the Fader button.

PTC worked well with Pro Tools, as you would expect, and any application–specific comments I’ve made up until now have been based on my experience using the app with Pro Tools on a Mac. But I also took PTC for a brief spin with Logic and Cubase. Logic required no additional setup and instantly found and made use of PTC, whereas in Cubase Eucon needs to be added as a Device in the Device Setup window.

EuControl comes with predefined Soft Keys for many common applications, and both Pro Tools and Logic showed these default Keys as expected. But when I loaded Cubase Pro 8 there were no Soft Keys defined. So I looked in the location where the Soft Key definitions are stored (on the Mac, this is in Macintosh HD/Library/Application Support/Euphonix/SQRL) and found by renaming the Cubase5.xml file to Cubase8.xml (and by restarting EuControl), I could then see the default Soft Keys for Cubase. I don’t necessarily recommend rummaging around like this, and you’ll probably want to create your own Soft Key definitions in any case.

Pro Tools Control isn’t bad for a free, version–one app, and perhaps its true significance is that it brings Eucon functionality to a mobile device, implementing features previously seen on Avid’s hardware control surfaces. However, as a remote control app, it’s not nearly as capable and polished as something like Neyrinck’s V–Control Pro (which has had time to mature and comes with a £40$50 price tag) or product–specific remotes from the companies mentioned at the start of this review. One notable hole is that inserts and sends cannot be controlled, and there is no way to make adjustments to plug–ins.

If you want a simple and free remote, PTC is worth trying out, and there’s clearly the potential for Avid to turn it into the universal remote app on the iPad.