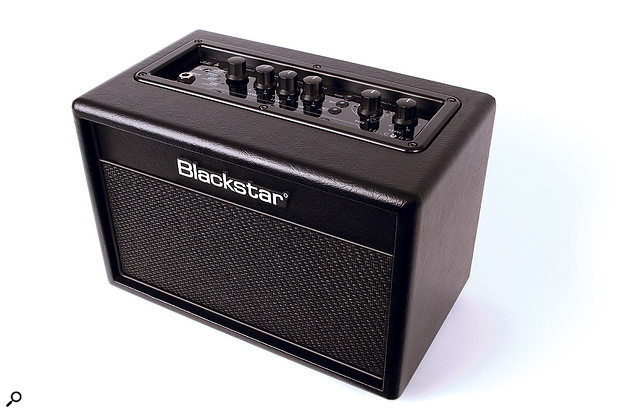 Can an amp like this be all things to all people? Blackstar have tried very hard to make it so!

Blackstar’s ID:Core BEAM, which is based on their ID–series modelling guitar amps, is so named due to its ability to amplify different sources: Bass guitar, Electric guitar, Acoustic guitar and Music. The last means the amp can accept stereo line–level audio via a mini–jack or the built–in Bluetooth receiver. This is possible because the sturdy MDF cabinet houses two ported acoustic chambers, each with a full–range three–inch speaker. Blackstar’s proprietary Super Wide Stereo processing creates the illusion that you’re listening to two well–spaced stereo speakers, and you can adjust the width to taste.

Conventional rotary controls govern gain and volume for instrument sources. There are no obvious level controls for the stereo line-level input, but the playback level is controlled by pressing the Tap switch and turning the volume control. The mini–jack output can drive headphones or feed a PA or recording system and though this disables the speakers, speaker emulation is applied for electric–guitar sounds. Power comes from an included 16V DC mains adaptor (there’s no battery option).

A six–way rotary voicing selector switch doubles as a push switch to select one of two banks of voices. The first, dedicated to electric guitar, offers all the expected options — there’s a choice of warm or bright clean sounds, and varying degrees of overdrive/distortion, from mild, bluesy crunch to rock mayhem. Bank two provides two voicings each for bass, acoustic guitar and electric–to–acoustic simulation. Tone–shaping duties are handled via a single ISF knob, a kind of one–knob EQ that morphs between a warm ‘UK’ sound and a tighter, brighter ‘US’ one.

The multi–effects are selected and controlled via three buttons and two knobs. The buttons select reverb, modulation or delay effects, though when used on bass voices the delay makes way for parallel distortion, with options from mild to full–on fuzz. A Type control is divided into four segments, each of which selects and controls one effect variation. For example, the delay may be set to linear, analogue, tape–emulation or analogue–emulation type, and the Type knob’s precise position will govern the feedback. The tap button adjusts the speed/time of the selected effect and functions as a ‘shift key’ to access additional features. A simple tuner mode is available, and a footswitch socket allows effects to be bypassed, and the second switch of a dual footswitch to select amp ‘patches’.

The amp connects to a computer (OS X/Windows) via USB, allowing access to Blackstar’s Insider software and firmware updates, and enabling the amp to be used as an audio interface. The recording source can be set to be speaker–emulated stereo or dual mono, a configuration in which the left channel carries the modelled sound plus mono effects and the right channel a clean signal. There’s also a re-amp mode for processing a recorded part.

With Insider, you can create, edit and store amp patches, and load patches from Blackstar’s user library. It also offers access to bass, middle and treble controls that are unavailable on the physical amp. In a dedicated ‘Patch’ mode, you can create your own custom version of each of the 12 amp voicings, either overwriting the factory settings or saving them in the software for later use. The software also enables you to tweak the footswitch behaviour. 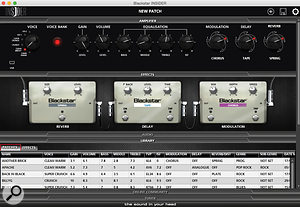 The Insider software offers parameter editing and access to patches and controls not accessible directly via the hardware.This amp can deliver high-quality sound at a surprisingly high volume. I wouldn’t choose it over a good pair of studio monitors, of course, but it does deliver a clean, full–range sound with adequate bass extension. It offers more than enough volume for comfortable home listening, and I had no trouble sending music from my iPhone using Bluetooth — it can also ‘remember’ paired Bluetooth devices. This, then, should serve well as a deluxe MP3 player dock.

Even when using it for bass guitar practise, the sound is clean and punchy, though the level’s capped so that the speakers can handle the bass modes. With an electric guitar, the acoustic guitar modelling sounds a little artificial, though still usable, but the sound from an acoustic guitar fitted with a pickup rivals that of some dedicated acoustic guitar amps. With electric guitar, the sounds are all pretty impressive. There’s a nice springiness to the clean sounds and a decent dynamic response to the crunch ones when ‘digging in’. The physical ISF control allows useful tonal variation, but Insider allows far greater tonal control and its noise gates work well too.

The stereo widening technology does a great job of recreating the sense of widely spaced speakers. Having said that, when the most extreme stereo–width setting is used, the sound brightens up to a noticeable degree. For general music playback I found a mid–way setting sounded more natural. The stereo effects sound quite dramatic when used with electric or acoustic guitar (the sound almost ‘wraps around you’) but, again, delays take on a glittery edge if one of the brighter amp settings is used. The extra EQ offered by Insider really helps in finessing such sounds.

Overall, then, the ID:Core BEAM is a lot of fun and sounds pretty good. It makes practise fun and provides decent direct bass and guitar recording, with magically wide effects where wanted, for less than the cost of some amp–modelling plug–ins. It can also feed a PA for larger gigs, and doubles as a great Bluetooth music player. At such an attractive price, what’s not to like? Paul White