When you're working with bass drums, it pays to use a mic dedicated to the task. Here's our selection of current models, with links to the SOS review where available.

The capacitor BDM01, from Swedish mic innovators Milab, is claimed to offer an excellent transient and high-frequency response. It can handle a whopping 155dB SPL, and its 'scooped' frequency response is designed to accentuate the deep boom and percussive click of bass drums. 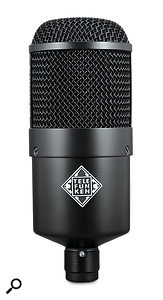 An end-fire dynamic mic, the new Telefunken M82 is derived from the company's popular M80, but adds two EQ switches for a total of four different voicings. The Kick EQ introduces a cut around 350Hz, while the High Boost switch adds a 2dB rise from around 2kHz to 10kHz. Telefunken also recommend the mic for spoken-word applications. 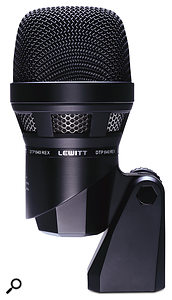 Like the Audio-Technica AE2500, this mic has two separate outputs for its dynamic and capacitor elements. The Lewitt model, however, goes one step further, by introducing an actual crossover between the two outputs, so that the dynamic element filters out frequencies below 150Hz, and the capacitor output is high-pass filtered above 2kHz. 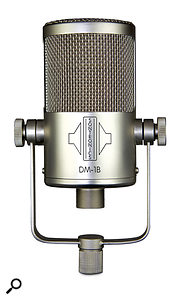 The large-diaphragm capacitor DM1B is built into a U-shaped yoke that makes the mic easy to position and angle inside a kick drum. Its capsule is modelled on Neumann's K67 (the same as that used in the classic U67), and with its -15dB pad engaged it is capable of handling SPLs up to 155dB. 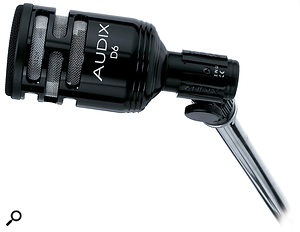 A cardioid dynamic mic, the US-made D6 has long been popular with engineers for use on kicks, thanks to its extended low-frequency response and mid-range dip. It is available as part of the D6KD set, which includes a robust, low-hanging mic stand designed specifically for bass drums. 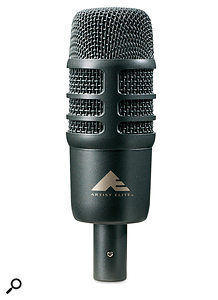 The AE2500 is an unusual mic, in that it incorporates both a dynamic and a capacitor element. Each has a different output, too, meaning you can use one to pick up the high-frequency click and the other to capture the kick-drum's LF sustain, balancing the two elements at mixdown. 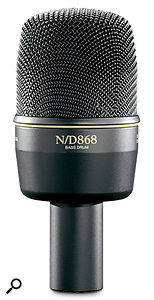 The N/D868 is said by Electro-Voice to be capable of handling "extremely high” SPLs without distorting. Its short form factor should make it easy to position inside a kick drum, while its frequency response has been tailored to minimise the need for external EQ. 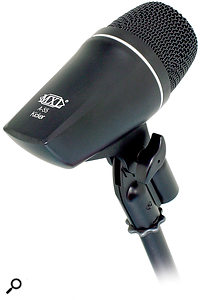 The cheekily named A55 Kicker is a dynamic mic, said by MXL to be extremely durable, thanks to its metal construction. MXL recommend the mic not only for kick drums, but also for floor toms, bass amps and tubas. 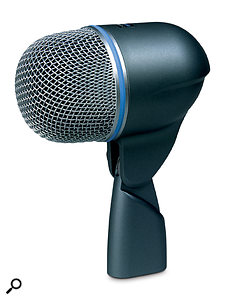 Unlike most of the mics here, the Beta 52A has a hypercardioid pickup pattern, which should help minimise bleed from other instruments, as well as reducing the risk of feedback when used on stage. It has an internal pneumatic shockmount system to absorb stand-borne vibration and mechanical noise. 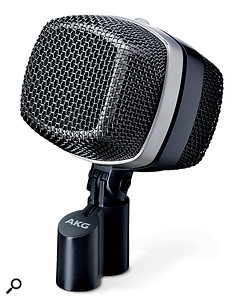 This modern recreation of AKG's classic D12 is a dynamic mic, but can also make use of a phantom power supply to enable an onboard EQ system, which affords the mic a choice of three different filter settings. 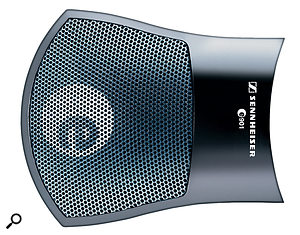 The E901 is a boundary mic, and is designed to be placed along the bottom of a kick drum shell. Sennheiser say that it offers a very natural sound, thanks to a fast transient response, while its heavily scooped frequency response should make it well suited to modern kick-drum sounds. 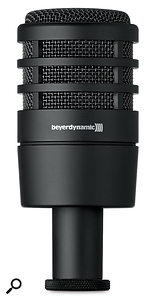 This supercardioid dynamic mic includes a built-in switchable EQ, which, when activated, cuts lower-mid boxiness, while introducing a HF lift to bring out the beater attack. This is said by Beyer to minimise, or even eliminate, the need for external EQ'ing. 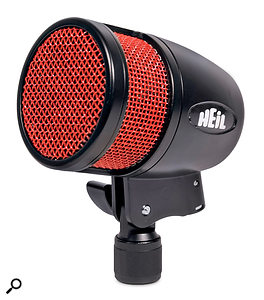 The PR48, from Heil's respected range of dynamic mics, employs a passive internal low-pass filter, with a resonant peak designed to bring out the fundamental frequency of kick drums. Its diaphragm is internally shockmounted, which Heil say makes it "impervious” to external vibrations and handling noise.

A dedicated bass-drum mic might seem a bit of a luxury, but there are many reasons to invest in one, and many different types to invest in! 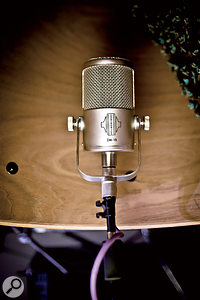 Bass drums can generate extremely high SPLs and very low frequencies — so it pays to use a mic designed with these things in mind!

The bass drum is an important element in many styles of music, and comprises a significant element of the sound of most live bands, in both stage and studio mixes. Getting them to sound their best isn't always easy, however, for a number of reasons. First of all, they generate an enormous amount of low-frequency energy (the clue is in the name!), which can present a serious challenge to many mics. Similarly, the high sound pressure levels that bass drums generate can cause some mics to distort or even become permanently damaged.

Happily, many mic manufacturers now build models specifically suited to bass drums, but even these come in a variety of different types. The most common (and often the cheapest, because they are relatively easy to make) are of the moving-coil type. Such mics feature a diaphragm, normally made of some kind of plastic, which has attached to it a metal coil. The coil sits in the field of an electromagnet, and as the diaphragm moves in response to nearby sound, so too does the coil, generating an electric current.

The advantage of this kind of mic design is that it is very robust, and can therefore handle very high SPLs before distorting. The disadvantage is that the coils can be relatively heavy, making them slow to react to transients and limiting the high-frequency response of the mic. For a 'classic' bass-drum sound, as you might hear in soul or jazz, that's unlikely to be a problem, but if you prefer a more modern sound, like the 'clicky' kicks you often hear in rock and metal styles, you may want to go for a capacitor mic.

Capacitors also use diaphragms, but they tend to be much lighter than those found in moving-coil mics. These are coated in a conductive material (usually a thin layer of gold), and stretched across a conductive backplate. They require much less acoustic energy to generate a healthy output, but the electronics involved can easily overload if they're not designed with high-volume instruments in mind. Capacitor mics capable of handling kick drums tend to be quite expensive, because they require high-quality components, but they have significant sonic advantages. Their increased sensitivity means you'll probably need less gain on your preamp or mixer, which should result in less noise. This shouldn't be too big a deal, as kick drums do tend to be very loud anyway, but it might be useful if you're dealing with a very light-footed drummer. The other advantage is that they respond much better to high frequencies and transients, and can achieve very modern-sounding results.

Ribbon mics are generally considered a bit of a no-no for use on kick drums. Their construction — an extremely thin ribbon suspended loosely within a magnet — means that they can easily be destroyed by strong blasts of air, although some designs use a 'ruggedised' material for the ribbon and can be surprisingly tough. Even then, such ribbons should be used with care, by placing the mic further from the kick, and even using a pop filter or wind shield. Ribbons can sound great on kick drums, thanks to their gentle HF roll-off and fast transient response, but the more distant placement usually required will inevitably mean more spill from other elements of the kit, which limits your options at mixdown.

Some small-studio owners might consider a dedicated bass-drum mic a bit of a luxury — but considering the technical challenges involved in capturing the kick, and the risks of using less hardy mics on them, you might find it a wise investment. Not only that, but many bass drum mics can also come in handy on other sources, including guitar and bass amps, vocals... and even brass!