If you're willing to pay for the best, CEDAR Audio's suite of plug-in processors could give you results that justify the investment. 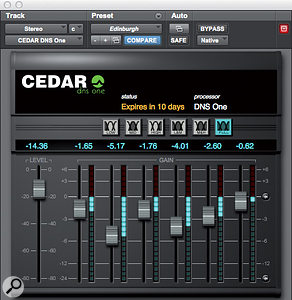 CEDAR Audio are well known for their DNS range of noise-reduction hardware, but the underlying technology is also available in plug-in form for Pro Tools and other professional audio platforms. The Studio Bundle was originally released back in October 2011, and includes not only the headline DNS One noise-reduction plug-in but also Debuzz and Declip modules, as well as a processor with uses outside of restoration: the Adaptive Limiter 2 dynamics plug-in. Since the announcement of Pro Tools 11, which will no longer support TDM or RTAS plug-ins, CEDAR have upgraded the bundle to the newer AAX Native format (although RTAS versions are still available for Media Composer and earlier versions of Pro Tools), and it seems a good time to take a closer look at this suite of plug-ins. Mac OS and Windows systems are both supported, but the CEDAR Studio suite requires a HASP dongle rather than the iLok we are all used to.

Let's start with DNS One. 'DNS' stands for Dialogue Noise Suppression, and the plug-in employs the same algorithms that CEDAR have produced over the years in hardware units including the DNS1000, DNS1500, DNS2000 and DNS3000; in fact, as well as the DNS One plug-in itself, the Studio bundle includes a separate plug-in that enables you to control and automate the latter two of these units.

I tried out DNS One on a number of clips from material that clients have sent me to 'work my magic' on. The first was a comedy show that was recorded on location in Edinburgh, which had some air conditioning and other noise in the background. In the case of this example, the challenge was to remove the background noise without spoiling the audience reaction that is the key part of any comedy show.

One of the main advantages of DNS One is that you don't have to waste time capturing noise profiles and rendering offline processing: you can use it as a real-time plug-in. With one instance across a dialogue stem, it is very quick and easy to find the correct settings for each clip and then write them into the automation so that the plug-in reconfigures itself for each clip. I found it very easy to set up, use and fine-tune. There are six Gain controls, which can be spread across the full bandwidth or focused on smaller ranges of frequencies to target specific problem areas. I was able to get to work quickly without having had much experience of using the plug-in, and it produced a very good result on the comedy-show clip. Next I tried it on a clip recorded on the floor of a noisy trade show. Again, I was able to very quickly reduce the background chatter and rumble so that the interview was much more intelligible, without the usual artifacts that are the side-effects of most restoration processes. 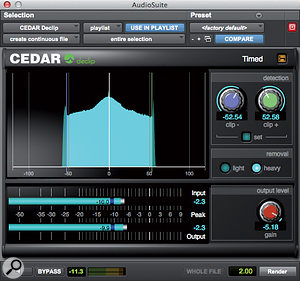 Many restoration suites now incorporate Debuzz modules targeting mains hum and similar low-frequency noise, and CEDAR Studio is no exception. I found it very easy to set up. The plug-in can tune itself in as long as the Frequency control is in the right general area, whereupon you can watch the 'magic eye' display lock onto the hum. You then adjust the Threshold and Reduction controls so that the plug-in isn't being worked too hard, but for me it was the Bandwidth control that was the most spectacular. In the test clip I use, the hum has a lot of harmonics that stretch up very high — way beyond the range of most Debuzz modules — but CEDAR's Debuzz module handled them all with ease, and didn't produce the ringing that you can sometimes get from multiple very tight notch filters used in this kind of process.

I chose to use the Declip module in AudioSuite mode, although it is also available as a real time plug-in. Clipping distortion appears as little 'ears' on the display, and to reduce it you adjust the position of the two Clip controls in relation to these 'ears', then reduce the gain to allow for the additional headroom needed when the plug-in reconstructs the waveforms that have been clipped off. The Clip controls for the top and bottom of the waveforms can be set differently, in case the distortion is asymmetrical. The process is simple, effective, and very good at dealing with even badly clipped audio.

These 'before and after' screens show the same clip before (top) and after (above) processing with CEDAR Audio's Declip plug-in. Impressive! 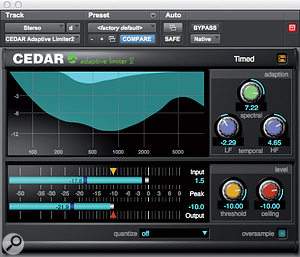 Many people think of the CEDAR Studio suite as primarily a set of restoration plug-ins, but CEDAR themselves see it as a post-production tool, hence the inclusion of Adaptive Limiter 2: a very different take on the classic single- or multi-band limiter for maximising loudness at mastering. CEDAR's process is a frequency-dependent one, but is much more sophisticated than a conventional multi-band compressor or limiter. Rather than giving the user detailed control over time constants or split points, there are three broad controls that shape how its response varies across the frequency spectrum and from moment to moment. This control set is simple but unusual, and takes a little getting used to. Perhaps more than with the other CEDAR plug-ins, you will need to spend a little time getting to grips with this plug-in to make the most of it, but it is no less effective than the others. At first, I had to check that it was processing, because I couldn't hear it working! Its transparency makes it an excellent 'broadcast type' real-time limiter.

Although the CEDAR Studio suite is not cheap, I know that a good number of freelance audio editors and mixers have found it worth the money to get the great results it produces in real time. The real-time processing is very good: I have used many other restoration plug-ins, and have only been able to achieve results of comparable quality by working offline. With CEDAR, I can do it in real time, and of course automate the plug-in to handle different clips with different problems. The Debuzz module's ability to handle a wide range of harmonics without ringing is excellent, the Declip module is effective and simple to use, and the Adaptive Limiter is an unusual but very worthwhile inclusion.

If you can't stretch to the CEDAR Studio suite, there are many restoration processors available from the likes of Waves and iZotope that can work very well if used correctly, but you will need to run them offline to achieve comparable results.

These are professional plug-ins with a correspondingly high price tag, but they let you get better results faster than anything else I know of.