Whatever you look for in an equaliser, you'll find it in DMG Audio's astonishingly comprehensive Equilibrium. 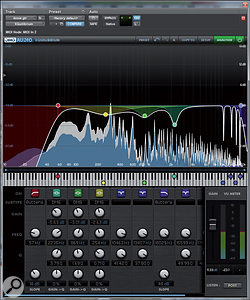 In a world awash with plug-in equalisers, what makes us choose one rather than another? For some people, everything else comes second to the way an EQ sounds, whether that means accurately recreating some treasured piece of vintage gear or imposing the most transparent possible tonal correction. For others, it's the user interface that is of primary importance, enabling them to get the right results as fast as possible. Still others prize flexibility above all, seeking tools that can do everything from super-narrow notch filters to obscure resonant shelves.

DMG Audio's aim with Equilibrium is to satisfy all of these users, and it could be argued that this is a plug-in that offers unprecedented riches in every department. You don't need more than a quick browse of the manual to realise that Equilibrium is unquestionably the most heavily featured and the most flexible equaliser ever made, and not by a small margin.

Following the likes of Waves' H-EQ and Sonoris's Parallel EQ, Equilibrium permits you to freely mix bands that use different EQ shapes and algorithms, but the menu on offer here dwarfs that available in any other plug-in I know of. Each instance can contain up to 32 shelving, filtering, notch or peaking bands, operating in series or in parallel. They can employ accurate models of vintage hardware EQ circuits, a wide range of digital algorithms, and idealised circuits that suffer none of the compromises inherent in analogue implementation. Up to eight channels can be processed simultaneously, in a variety of stereo configurations. The plug-in as a whole can operate in linear-phase, minimum-phase, analogue modelled and 'free phase' modes, with a variety of different trade-offs between ultimate sound quality, CPU consumption and latency on offer. In 'free phase' mode, you can configure the phase response on a per-band basis, and even manually adjust the shape of the impulse response that is generated for an individual EQ band. 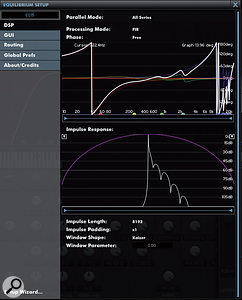 In 'free phase' mode, you have control over the phase response of each EQ band, as well as various options allowing you to adjust the impulse responses that are generated. Oh, and each instance of Equilibrium supports not only A and B settings pages for comparison, but C, D, E, F, G and H too!

There is also a great deal of flexibility about how all this power is accessed. You can have Equilibrium present itself as an old-school equaliser, where everything is controlled by knobs, you can enter precise values in text boxes, you can see your EQ bands as notes on a musical scale, and they can be displayed as graphical curves. Not only do these have the usual centre points that can be picked up and moved around using the mouse, but also floating tooltips that appear when selected, allowing you to change their shape, algorithm and so on. The same graph that shows the EQ curves can simultaneously display a wide variety of spectral analyses showing the input or output signals, or both, and can be zoomed to focus on a particular frequency region. There are also comprehensive metering options. From a visual point of view, the only thing you can't do is make Equilibrium into a simulacrum of a hardware rack unit or channel strip, which is fine with me.

In total, there are literally hundreds of configurable parameters affecting both the sound of the EQ and its user interface. This is a plug-in that can be modified on an unprecedented scale and level of detail. To give you an idea, the 'Graph' submenu of the GUI preferences alone contains 19 options, including minutiae such as how the background should be rendered, "whether un-bypassing a group of bands can start a group drag”, whether the EQ bands are shown filled or outlined, and if the former, how transparent the fill should be! 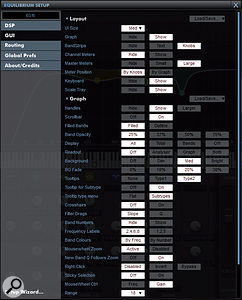 This is just a small selection of Equilibrium's GUI preferences.

As you'd expect, the provision of configurability on such a level has the potential to intimidate users, but DMG Audio have put a lot of thought into making sure this doesn't happen. Equilibrium is thus the first plug-in I've ever seen that has its own Setup Wizard. This enables you to make broad-brush settings by answering a short series of simple questions such as whether you are expecting to run lots of instances in a busy mix, or whether you want ultimate sound quality for mastering. The settings the Setup Wizard determines can then be fine-tuned later through the plug-in's preferences. The Setup Wizard takes nearly all of the hard work out of setting up the plug-in to your taste, and in practice, there were only a couple of times when I found myself struggling to track down the correct preference to deal with some bit of user-interface behaviour I wanted to change. 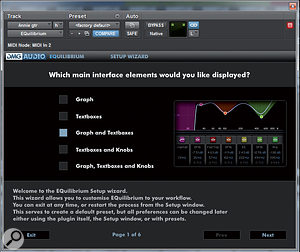 Equilibrium has its own Setup Wizard.

I can imagine that many people would want to employ different Equilibrium configurations almost as two or three different plug-ins, for different applications. You might, for example, want one set of display and DSP preferences for mixing and another for mastering. This is made possible by the ability to load only selected aspects of a preset: you can, for instance, recall the display configuration from a saved preset without recalling its actual EQ settings.

Every EQ In One

In short, then, Equilibrium leaves all other EQ plug-ins in the dust when it comes to features and flexibility, and DMG have done a good job of packaging this power in an interface that makes it accessible and reasonably straightforward to use. So how does it sound? Well, the only real answer is that it sounds like you want it to sound. Even in its least CPU-intensive mode, it's hard to fault the audio quality, while mastering engineers and other obsessives can tweak it to the point where its accuracy approaches the limits of what is theoretically possible in a digital algorithm. If character is what you want, its recreations of classic analogue hardware EQ curves seem very plausible to me, although, of course, there's no modelling of non-linear factors such as transformer or tube distortion, as you might find in a dedicated emulation of a hardware unit.

As an example of what's possible within a single instance of Equilibrium, one of my test tracks was an acoustic guitar recorded through a cheap DI box. Some sort of interaction between the pickup and the DI had resulted in an almost complete null at 800Hz; there were several nasty resonances in the 10kHz region; the low end was boomy and ill-defined; and, as is usual with piezo pickups, the mid-range was honky and in need of overall tonal correction.

The high-frequency resonances were very narrow, to the point where they wouldn't show up on the analysers built into some EQ plug-ins. Equilibrium's zoom controls made it child's play to exclude everything below 8kHz and focus in tightly on the problem region, whereupon I could introduce notch filters at the offending frequencies. At the other end of the spectrum, Equilibrium gave me a huge range of high-pass filter and low-shelf shapes to choose from, making it straightforward to achieve exactly the right degree of control. To address the hole at 800Hz, I had the option not only of numerous conventional peak or bell bands, but of DMG's 'flat top' shape, which can be adjusted to behave almost like a band-pass shelving filter. And, of course, I was equally spoiled for choice when manipulating the tonality of the mid-range.

But that's not half the story, and I could have gone much further. For example, a well-known side-effect of linear-phase EQ algorithms is 'pre-ringing', which tends to be more audible at lower frequencies. In Equilibrium, I could have set my high-pass filter to operate in conventional minimum-phase mode, to avoid audible pre-ringing, while using the other bands in linear-phase mode. Had there been a need for more gentle and musical tonal shaping in the mid-range, I could have combined a high-pass filter in series with peak and shelving bands run in parallel. And if one particular bass note had been boomy, I could have used Equilibrium's musical keyboard to track it down. I could even have set up multiple bands targeting the fundamental and the harmonics, and grouped them to be moved up and down with one swoop of a mouse. The possibilities are truly endless, and the only real down side to Equilibrium's unparalleled flexibility is the endless temptation to persist in tweaking settings, in the hope of making it sound even better!

DMG Audio's incredibly comprehensive plug-in is far more than just an EQ: it's every equaliser you can think of, rolled into one.