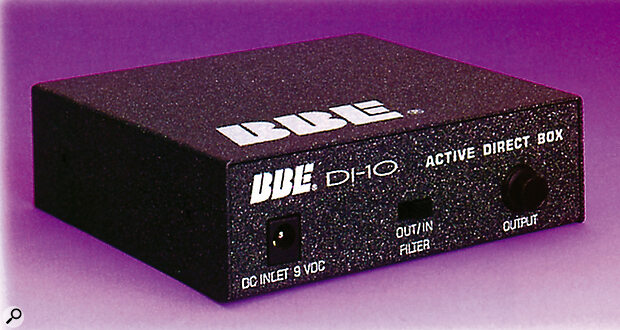 DI boxes are essential pieces of studio kit, but they don't all do the same job. For DI'ing an electric guitar or bass that doesn't have active circuitry, you'll need a DI box with a high input impedance, whereas for a line level signal (such as is produced by a guitar preamp), an impedance of around 47kΩ is more common. What's more, if you're DI'ing a guitar amplifier, it's useful to be able to take a feed from the speaker output so as to retain the coloration of the amp's output stage, but because DI'ing bypasses the speaker, some form of speaker simulation filtering will be necessary to restore a natural amp tone. Valve amplifiers don't like running without a speaker, so you either have to provide a dummy load or fit a thru socket so that the original speaker can be left connected (BBE have taken the latter approach).

The BBE DI‑10 is designed specifically for use with line or loudspeaker level signals, which suggests that it was designed with instrument amplifiers in mind — there is no high impedance instrument input. Being an active DI box it needs a power source, and can run from either batteries, phantom power or an external mains adapter. A switchable speaker simulation filter is included, based on a 24dB/octave low‑pass network with a 4kHz cutoff frequency. This may seem rather severe, but in practice most guitar speakers roll off quite steeply above 3kHz. If they didn't, the overdrive harmonics would sound raspy and unpleasant.

Packaged in a neat but tough steel box, the DI‑10 has an unbalanced line input jack, speaker in and thru jacks and a balanced XLR output as well as an unbalanced jack output. A DC inlet accepts a 9V DC power supply and a slide switch brings in the speaker simulator.

The DI‑10 works fine in both straight and filtered modes, and the speaker simulation provides a lively basic tone with a decent amount of bite and no nasty high end rasp. I did an A/B comparison with my passive Palmer Junction box using a Boogie V Twin preamp as the source, and though there was a notable difference in tone, I wouldn't say that either one was more or less authentic than the other — it was more like the effect of using a different mic on the same amp. The Palmer had more low end punch, but I felt the BBE was better at putting over the top end ring and bite while at the same time keeping the tone smooth and natural.

In all, the DI‑10 is a good instrument amp or preamp DI box, with a speaker simulator that sounds better than some dedicated units I've tried — a very pleasant surprise! Paul White