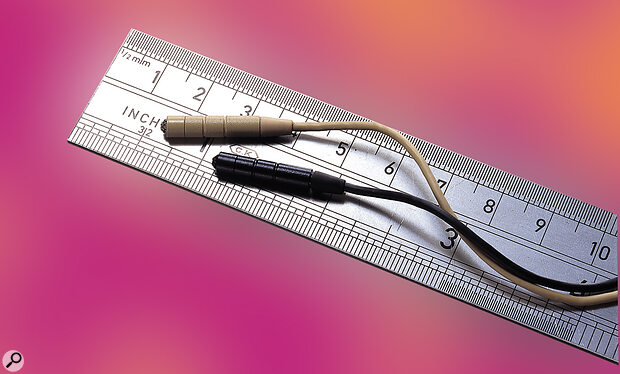 Though they're usually not specifically designed for recording, miniature mics can be real problem solvers in certain situations.

Miniature microphones tend to be designed with live theatre sound or broadcast in mind. In these situations there's often a need to get a mic close to a person or other sound source without it being visually obtrusive. However, they can also be useful in live recording if you have a singing guitarist who wants to record vocals and acoustic guitar at the same time: using a miniature microphone attached to the guitar can help reduce the amount of vocal spill entering the guitar mic. Miniature mics are also very helpful when you're dealing with a performer who tends to move around a lot.

Beyer's MCE7 is a tiny, electret, omnidirectional microphone available in both black and flesh‑coloured finishes. Because the mic is so small, it comes bonded to a thin cable, and the review model was fitted with a Lemo connector enabling it to be plugged directly into a standard radio transmitter, though alternative terminations are available, including free ends for soldered connection. Whichever termination is used, the microphone requires a DC‑bias power supply of between 1.5V and 10V, which isn't directly compatible with the 48V phantom power used in most studios — nor is the Lemo connector a natural mate for an XLR socket. This is where an accessory with the memorable name of a CV15PV‑L comes to the rescue. Looking rather like an in‑line transformer, this device accepts the Lemo connector at one end and a standard XLR mic cable at the other, at the same time converting regular phantom power to something the MCE7 can use.

Technically, the mic has an impressive spec, with a response that's nominally flat from 20Hz to 20kHz, a presence lift at around 9kHz, and a very gentle LF roll‑off below 100Hz. Between 100Hz and the start of the presence rise at around 4kHz, the response is ruler‑flat. The maximum SPL is around 120dB, so although you don't get the same headroom as a really good conventional mic, there are few situations where it would run into trouble. Similarly, the sensitivity, of 28mV/Pa, is rather less than you'd expect from a normal capacitor model, but is quite adequate for the close‑miking situations in which such a mic is invariably used. In fact, the only area in which performance is compromised to any noticeable degree is signal‑to‑noise ratio, a problem that besets all miniature microphones to some extent. This is quoted as 60dB, but in a real‑life situation I found that the level of noise was not intrusive.

Supplied with the mic is a tiny clip, little more than a bent piece of wire with a plastic pad attached. While this is ideal for use with theatrical clothing (it renders the mic virtually invisible), it leaves much to be desired for miking instruments, as there's no positional adjustment available at all. I tested the mic at a live acoustic gig and used it on the acoustic guitar, as the player has a tendency to move around a lot yet doesn't like the sound of his guitar DI'd. The clip gripped well enough on the edge of the soundhole, but because the mic couldn't be repositioned it was awkward to get it into a position where it produced a good sound and also wouldn't be hit by the player. Ultimately, this edge‑of‑the‑soundhole position was abandoned because of the tendency of the mic to feed back at relatively low levels, so instead I resorted to clipping it so that the capsule was inside the guitar body rather than outside. As you might expect, this produced a noticeable rise in bass, but it also resulted in a much stronger signal with no feedback problems, so I decided to roll off a little bass on the mixer and stick with this new position. The outcome was a beautifully solid yet articulate guitar sound that seemed much more natural than you'd normally expect from a bridge transducer or contact mic. What's more, the mic stayed put with just a tiny strip of masking tape over the clip, and it also survived the player's attempt to walk off stage at half‑time without unplugging it!

Despite the inflexibility of the clip, this mic turned out to be a very good performer, and if I had been recording that gig it would have been well up to the task. The presence peak was probably responsible for the mic's tendency to feed back at high frequencies when used at high gain settings, but such spectral tailoring is common on miniature mics, to help compensate for the position in which they're generally worn. I wouldn't use any miniature mic through choice where a fixed mic could be used as an alternative, but when you're recording live acoustic players the compromise is often well worthwhile.

This is primarily a broadcast/theatre mic, but it has a number of recording applications, especially if you're working with live acoustic instruments.