This new Beyer model doesn't sacrifice quality in its quest to be a truly versatile all-rounder.

Beyerdynamic's MC840 is a relatively compact, large-diaphragm capacitor microphone, offering five switchable polar patterns, a choice of two pad attenuation values and two low-cut roll-off frequency settings. This mic is, in many ways, an evolution of the well-established Beyerdynamic MC740, as it uses what is essentially the same capsule, teamed with higher-spec transformerless electronics. Beyerdynamic recommend the 840 for orchestral use, though it is also suitable for more obvious studio recording applications, such as vocals, acoustic guitars and drum overheads. 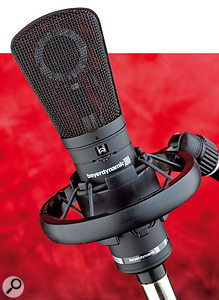 Although the MC840 is classified as a large-diaphragm microphone, the dual-diaphragm, gold-vapourised capsule has an active diameter of around 0.8 inches, which is a little smaller than those of many typical 'large-diaphragm' models, most of which tend to have capsule diameters in the region of an inch. It's worth noting that a slightly smaller capsule size can help improve the mic's off-axis response. The quoted frequency response is from 30Hz to 20kHz, and at all pattern settings there is a gentle presence hump, centred at around 10kHz or so, that gives an 'airy' quality. Below 5kHz the response is essentially flat until the 30Hz roll-off kicks in. Because the presence peak is so high up, you'd expect the mic to sound essentially uncoloured, apart from a heightened sense of clarity at the top end. That's pretty much what I found in my tests: the peak doesn't significantly increase harshness in the presence region, so the mic still sounds smooth.

As you'd expect from Beyerdynamic, the MC840 is beautifully engineered. It has a dual-layer, steel-basket assembly that is somewhat 'parking meter' shaped. The brass body is finished in what appears to be black powder coating, and the whole structure seems robust without being over-heavy. The output is on a conventionally-wired XLR, and nominal 48 Volt phantom power is required for operation (though the mic will run on power as low as 11 Volts if you're prepared to sacrifice some headroom).

The mic's roll-off filter can be set to flat, 80Hz or 160Hz via a horizontal thumbwheel located just below the basket. A similar mechanism selects the pad setting (0dB, -10dB or -20dB). A third thumbwheel selects the polar pattern: omni, wide cardioid, cardioid, hypercardioid or figure-of-eight. The microphone comes in a rigid plastic storage case (which takes up far less space than the cases so many mics come in these days) and you also get a stand clip and an EA37 elastic shockmount as standard. The latter is considerably better than the one that was available for the MC740.

The sensitivity of the microphone, measured open-circuit, is a healthy 18mV/Pa, while the maximum SPL without the pad is 127dB, rising to 147dB with the 20dB pad switched in, so loud sounds are not going to upset it. The equivalent A-weighted input noise is an acceptable (though not exceptionally low) 17dB. This means that the mic will work happily with all normal near sources, though it may not be the best choice for more distant, low-amplitude sound capture.

In use, the Beyer logo denotes the front of the mic, which is important in any of the cardioid pattern modes. For close-up vocal use, a pop shield (not included) is a must, as it is with any microphone of this type. Flicking through the pattern options shows the appropriate graphic through a small cut-out in the mic body and, in addition to the expected patterns, there is an 'R' setting. Apparently, this was included in case Beyerdynamic decide to make a remote-controlled version, but it is not operational on this model. Both roll-off settings have fairly gentle slopes of about 6dB per octave .

Weighing in at 286g, and with an overall length of 6.75 inches (around 172mm), the mic is light enough to stand-mount without experiencing balance or drooping problems, and it sits very stably in its shockmount. The shockmount itself is made of tough plastic and the swivel mechanism works by friction alone. There is no means of tightening the latter but, unless it works loose over time, it is quite stiff enough to hold the microphone at any practical angle. 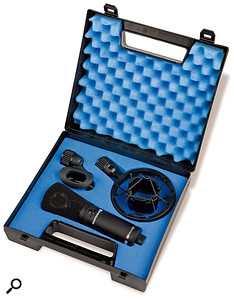 The MC840 comes complete with its own shockmount, in a sturdy but lightweight plastic carry case.Photo: Mike CameronThe sound of this mic isn't as similar to that of the MC740 as I had expected, despite the fact that both are based on the same capsule design. The MC840 is more sensitive, which may simply be a matter of the preamp design, but it also has a noticeably smoother high end than my own MC740 (which can sound a bit splashy in some situations). The MC840 also offers more lower-mid-range vocal support, with a slightly compressed, almost tube-like character, which can serve to beef up vocals that need help. When testing, I found no significant background noise in normal studio applications. The tonal balance of the mic remained sensibly constant throughout the patterns (although for close-up work the omni pattern inevitably sounded more 'lightweight' because of the lack of proximity effect). However, I did find the mic slightly more susceptible than the MC740 to handling noise and — more significantly for a stand-mounted mic — to vibrations transmitted up the cable. This manifests itself as a 70 to 80Hz thump, so even if you use the shockmount it is essential to 'dress' the mic's cable so that it isn't dangling freely from the back of the mic.

As an instrument mic, the MC840 is also very capable. Its ostensibly neutral tone combines with the hint of 'air' to keep the detail without adding harshness. In a typical project studio it could cope with just about anything, from drum overheads to acoustic guitars, and pianos to percussion. In the larger arena, this mic should also be good for orchestral use. The switchable patterns obviously add to the flexibility too, and the MC840 comes very close to being that 'desert island' mic that can get you out of trouble in just about any normal situation.

Overall, the MC840 is a very capable and well-engineered microphone that, to my ears, sounds better than the MC740 from which it is derived. It costs somewhat less than the MC740 did when it was first introduced, though it still represents a substantial financial outlay for anyone working on a project studio budget.

If you intend to use it mainly for your own vocals, then it would be wise to check out a number of different mics first, as experience shows that it is not always the most highly-specified microphone that sounds best on any given voice. For example, on my own voice the MC840 doesn't sound that much different from the budget Audio Technica AT2020 or the SE 2200A — but your experience may well be entirely different.

If, on the other hand you are looking for a microphone for a commercial facility, and plan to use it with a variety of singers and instruments, then the MC840 would be a good choice, given that it combines a sense of neutrality with gentle flattery.

If you decide that the MC840 is a good match for your recording needs, you can be confident that you are buying a microphone with a fine provenance, from one of Europe's top mic manufacturers. It should give you many years of reliable service, and it is also worth noting that, whereas many cheaper, far-eastern models are considered to be disposable, Beyerdynamic have the support network to service and repair their microphones: money spent on a quality microphone like this is always a good investment.

Although the MC840 is not without worthy competition in its price range, it is capable of covering a lot of ground, and is a professional microphone in the true sense of the word.

The MC840 is a very versatile mic and the nearest equivalents are probably quality studio workhorse models such as the AKG C414, Neumann's TLM103 (which is cardioid only, but also less costly) and the Audio-Technica AT4050.

The MC840 is a class act from one of Europe's leading microphone companies. It makes a top-notch vocal mic but is also designed to be a flexible instrument model.