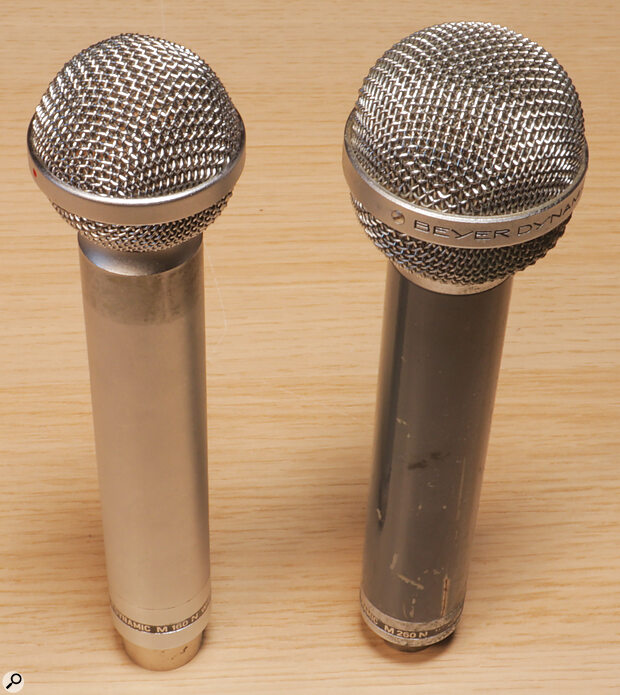 Despite having not one but two ribbons, the Beyer M160 (left) is one of the smallest ribbon mics ever made. The single‑ribbon M260 (right) is somewhat larger and has a slightly less extended frequency response.

Affordable, reliable and unexpectedly small, Beyer’s ribbon mics have been studio staples since the mid‑’60s.

There are few manufacturers who make all three of the main microphone types: ribbons, moving‑coil dynamics and capacitor mics. Beyerdynamic, however, have produced classics in each of these fields, and many of their mics have been continuously available since the 1960s. In this article, we’ll look at the various different ribbon models that Beyer made, and consider what makes them distinctive.

The operating principle of a ribbon mic is simple. A very thin, lightweight strip of metal is suspended between the poles of a magnet. When vibration in the air is transferred to the strip, electromagnetic induction generates a tiny current. The ends of the strip are connected to a transformer which acts as an impedance converter and voltage amplifier, allowing this signal to be passed down a cable to the mic preamp. 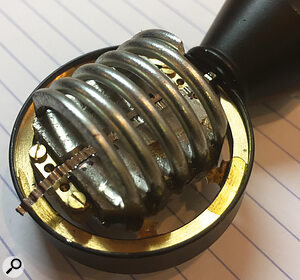 A Beyer M130 on the service bench (with replacement non‑Beyer ribbon). The only figure‑8 model in the Beyer range, its minuscule size is made possible by the unusual internal design. The ‘spring’ holds the magnets in place and acts as the magnetic return path.Photo: Stewart Tavener/XaudiaIn classic ‘long ribbon’ mics such as the RCA 44, the magnet assembly is huge, which in turn makes the mic itself bulky and heavy. Even the early designs that used a shorter ribbon, such as the Coles 4038, were hardly small. Beyer’s innovation was to create a ribbon motor that was much more compact and lightweight. This made it possible to fit a ribbon element in the sort of ‘lollipop’ or ‘ice‑cream cone’ housing typically used for stage mics. It also became feasible to design ribbon mics where the rear side of the ribbon motor was not open to free air, but coupled to an acoustic labyrinth, thus modifying its native figure‑8 polar pattern to become cardioid or hypercardioid.

The down side of using a shorter ribbon and smaller, lighter magnets is that it becomes harder to achieve usable sensitivity levels. To counteract this, Beyer found a clever way of doubling the effective length of the ribbon: some of their models actually have two ribbons, stacked a millimetre or two apart on top of one another. Another perennial challenge for ribbon mic designers is achieving an extended high‑frequency response. Again, Beyer had an innovative solution, in the shape of a plastic ‘treble resonator’ that sits on top of the ribbon assembly. This has the happy side‑effect of shielding it from air blasts, too.

M Is For Ribbon 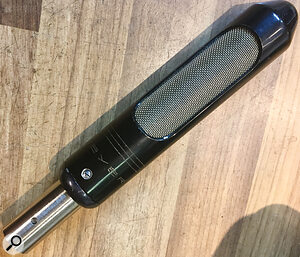 This rare Beyer M31B was one of Beyer’s first ribbon mics.Photo: Stewart Tavener/XaudiaThe early history of Beyer’s ribbon mics is hard to untangle. A little‑known model called the M31B was introduced some time in the mid‑’50s, but it doesn’t seem to have sold well, and quickly disappeared from the range.

By the mid‑’60s, however, Beyer were offering half a dozen different ribbons. Nearly all featured a cardioid or hypercardioid pickup pattern, including the now‑obscure M320 and M360. With their brutalist square bodies, these are outwardly very different from the other Beyer mics, but the ribbon motor inside is similar. The M360 was the most expensive mic in the entire Beyer catalogue at one time, so one imagines it was pretty good; the 320 was less than half the price. These models are rare today, and I’ve never seen either in the flesh. 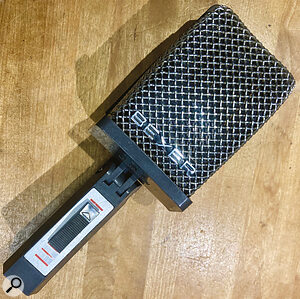 Much more familiar nowadays are the two double‑ribbon models, the M160 and M130. If you haven’t seen one before, you may well be surprised at exactly how tiny these are! Small, lightweight and very stylish, they look more like pencil capacitor mics than ribbon mics — but ribbons they are, and very fine ones too. The M160 and M130 were designed to be used as a pair for Mid‑Sides recording, and the M130 is distinctive in being the only figure‑8 ribbon in Beyer’s catalogue. Both are still current products, and apart from minor details like the output connector and colour scheme, have remained unchanged since the ’60s.

Beyer have, alas, called time on the other models that shared a similar form factor. The M260 was a more affordable and somewhat larger hypercardioid mic that used a single ribbon. It was designed as a general‑purpose mic for both studio and stage use, and unlike most ribbons, is happy being used as a close‑up vocal mic. Later versions are designated M260.80 and have a different transformer that implements a fixed 80Hz high‑pass filter; these models, also identifiable by their tapered body, are perhaps less desirable today.

Small, lightweight and very stylish, they [M130 & M160] look more like pencil capacitor mics than ribbon mics — but ribbons they are, and very fine ones too.

Larger still, the M500 was purposely designed as a stage vocal mic — not a role one commonly associates with ribbon mics! It found favour with some high‑profile artists including Crosby, Stills, Nash & Young. Beyer kept faith with the concept, and introduced a latterday take on it in 2016 called the TG90 Vr, though this now appears to be discontinued. They also incorporated their ribbon motor into heads for wireless mic systems, such as the RM510. Finally, Beyer ribbon motors also found a home in mics sold under other brands such as Steffens, MBHO and Fi‑Cord, some of which are noticeably different from Beyer’s own models. 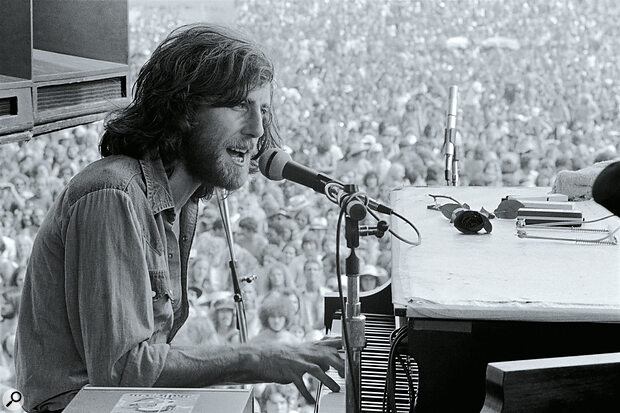 Sound‑wise, the double‑ribbon models are arguably the most ‘hi‑fi’, with the widest frequency response. Indeed, when used at a distance, the M160 can even sound a bit too bright or thin, which isn’t what you’d expect from a ribbon mic. Many engineers like it as a drum overhead, and a pair of M160s was responsible for the iconic drum sound on Led Zeppelin’s ‘When The Levee Breaks’. I’ve never been particularly keen on it in that role myself, but I absolutely love it as a close mic on guitar amps, where it is typically smoother than most moving‑coil mics yet not as dark as most ribbons. The M160 also makes a fine mic for bowed and plucked string instruments, acoustic guitars, hand percussion and some vocals, with its hypercardioid pickup making it particularly useful in situations where there’s spill to be avoided.

...a pair of M160s was responsible for the iconic drum sound on Led Zeppelin’s ‘When The Levee Breaks’.

The M260 is, if not exactly brighter, certainly more forward‑sounding than the M160. It doesn’t have the same extended high‑ and low‑frequency response, but makes up for it with a more pronounced focus on the upper mids that helps things cut through the mix. I like it on most of the same sources, and actually prefer it on many of them. I’ve never had the chance to use an M500, but by reputation, it’s the liveliest of the three, with a curtailed low‑frequency response appropriate to close‑up use.

A ribbon mic is a very simple device, and the main issue when buying one secondhand concerns the state of the ribbon. If this is stretched or worn‑out, or if it’s scraping the edge of the magnet gap, the mic will sound bad. The good news here is that the Beyer ribbons seem quite resilient, certainly more so than those used in the Coles 4038, for example. I’ve bought three or four over the years, and none has needed re‑ribboning. Indeed, I once bought one cheaply because it was rattling, and it turned out that the plastic treble resonator had come loose from the ribbon motor. A dab of superglue and it was as good as new.

The bad news is that if your Beyer mic does need re‑ribboning, there are not many third‑party repairers who can handle the double‑ribbon models, and very few indeed who can recreate the correct longitudinal corrugation pattern. Most technicians seem to replace them with conventional zig‑zag ribbons, which is something to consider if you’re buying a Beyer mic that has been ‘refurbished’. Another thing to bear in mind is that, like many other European mics of similar vintage, older Beyer ribbons are often found with locking DIN connectors, in which case you’ll need an adaptor cable. The XLR versions usually have the letter C (for Cannon, original manufacturers of that connector) after the model number.

The M160 and M130 have always been specialist studio tools, and though they could hardly be described as rare, second‑hand examples don’t come up for sale all that often. Given that both are available new, there’s nothing to be gained by paying over the odds for ‘vintage’ examples. The M500 is surprisingly elusive on the second‑hand market, as are the more obscure early models. However, M260s crop up very frequently and should be quite affordable. They are excellent general‑purpose studio mics, and if you have the chance to pick up a couple at reasonable prices, they’ll see plenty of use. 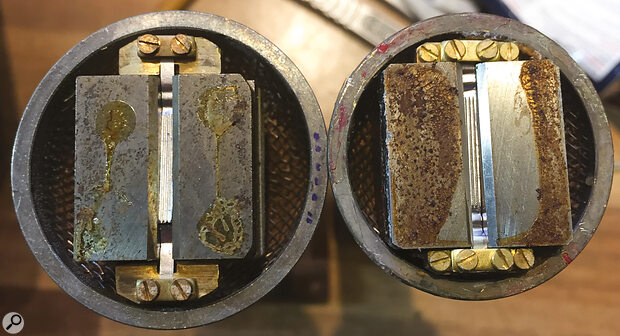 The ribbon motors in an M260 (left) and M160, with the treble resonators removed. As you can see, most of the ribbon is corrugated lengthwise.Photo: Stewart Tavener/Xaudia

The strip of aluminium or other metal that forms the ribbon in a ribbon mic is corrugated. This gives it some resilience to air movement, allows its tension to be adjusted and increases the effective length of the ribbon, increasing the sensitivity of the mic. However, whereas most classic mic designs use a simple ‘zig‑zag’ or transverse fold pattern, the Beyer mics are different. There are a couple of zig‑zag folds at either end of the ribbon, but the centre portion is creased lengthwise rather than crossways. This ‘pistonic’ structure means that the entire centre part of the ribbon moves as one when sound is incident upon it. Opinions differ as to how much of a difference this makes to the sound of the mics; they can be and often are substituted by conventional zig‑zag ribbons, but won’t perform to the original specs when this is done. Fortunately, the Beyer ribbons generally seem to be relatively robust.