Rode take the established ribbon–mic formula and apply some novel design ideas to come up with what could well be a future classic.

As recently as 15 years ago, the ribbon microphone looked to be a dying breed. Few technological advances had taken place since its ’50s heyday, and in a world full of cheap and robust moving–coil and capacitor mics, the handful of ribbons that remained in manufacturers’ catalogues seemed more like charming anachronisms than modern studio tools. Bulky, expensive to make, lacking sensitivity, dark–sounding and with a reputation for fragility, ribbons seemed headed for a terminal twilight. 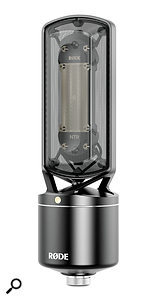 How things have changed, and over the last decade and a half, ribbon mics have enjoyed a massive resurgence of popularity. Perhaps even more surprising is the amount of new technological development that has taken place in that time, such that what once looked like a mature technology has now been advanced in numerous ways. The low sensitivity of ribbon mics has been addressed through the use of powerful rare–earth magnets and built–in active electronics. Their fragility has been tackled by the invention of new ribbon materials such as the ‘Roswellite’ employed by Crowley & Tripp (now part of Shure). And detailed work on the geometry of ribbon elements is extending their frequency response into new and unfamiliar regions.

The ribbon revival has seen many mainstream mic manufacturers throw their hats into the ring alongside specialists such as Coles, AEA and Royer, and the latest to do so are Rode. Launched earlier this year with much fanfare, the NTR is positioned very much at the cutting edge of current development. For instance, its 1.8–micron–thick ribbon is cut using lasers; Rode say this process not only ensures a precise fit in the magnet gap, but that, unlike mechanical cutting, it does not introduce microscopic tears and burrs which can weaken the ribbon. The ribbon element is internally shockmounted and suspended within a very open headbasket that is designed to minimise acoustic shadowing. And as well as a hefty, custom–made step–up transformer, the NTR uses active electronics to present a healthy signal level to your preamp.

Designed and built entirely in Rode’s Australian factory, the NTR is beautifully made and visually very distinctive. An imposing beast, it measures almost 22cm from end to end and weighs around a kilo. It comes in an impressive foam–lined black cardboard box, and ships with a ‘ribbon retaining screw’ bolted into the top. This, presumably, locks down the internal shockmount to prevent destructive low–frequency oscillations during transport, and needs to be removed before use. The mic is bundled with a newly strengthened version of Rode’s RM2 mount in matching black, which screws to the base of the mic and permits it to be rotated through more than 180 degrees. The internal shockmounting apparently means that an elastic suspension is not required, and in practice I encountered no problems with stand–borne vibration.

The NTR is distinguished from most other ribbon mics in its extended HF response.Like many of the classic ribbon mics, the NTR is a ‘long ribbon’ design, but its construction incorporates a ‘phase plug’ halfway along the ribbon, which presumably helps to improve high–frequency response. The NTR’s published frequency response is quite unusual, even for a ribbon mic. Despite being measured at 1m, beyond the distance where proximity effect will be at its strongest, it suggests maximum sensitivity at 20Hz, with a very gentle slope across the frequency spectrum that sees it about 3dB down at 1kHz and 10dB down at 10kHz, interrupted by a small peak at 4kHz or so. However, whereas most ribbon mics roll off pretty steeply above around 15kHz, the NTR has quite a substantial peak at that frequency, and is actually more sensitive at 20kHz than at 10kHz. This response is, Rode say, achieved without the use of any EQ within the active electronics.

Personally, I’m ambivalent about active electronics in ribbon mics, and I’d have thought that anyone contemplating a £600$800 mic purchase will probably own preamps that are up to the job of amplifying a passive ribbon. Active circuitry inevitably introduces noise, and the NTR’s self–noise is quoted as 15dBA SPL, which is comparable to a good small–diaphragm capacitor mic. It also restricts the headroom of the mic: this is quoted as 130dB SPL, but for one percent THD rather than the more usual 0.5 percent. On the plus side, there are circumstances where the NTR’s active circuitry might be handy, such as for driving long cables. With a sensitivity quoted at 30mV/Pa, it delivers a healthy level on most sources, but could even prove too hot in some circumstances.

First audition confirms that the NTR has all the traditional attributes that have given ribbon mics their renewed popularity: a dark, smooth, even sound, a lack of resonances within the audible frequency range, and the supremely well–behaved figure–of–8 response and benign off–axis tone that you never quite get from multi–pattern capacitor mics. In the month or so I had the NTR on loan, I made a point of trying it on everything that came through the studio, and it fulfilled the classic functions of the ribbon mic with ease. If you want a tambourine that is detailed without being brutally sharp, strings that are smooth and rich without a hint of shrillness, or electric guitars that simply sound like the amp does in the room, the NTR will deliver — but then, so will many other ribbon mics.

Perhaps more impressive was the NTR’s ability to shine in roles where you wouldn’t usually employ a ribbon mic, and I was particularly struck with its handling of low–frequency content. Many cheaper ribbon mics compromise low–frequency extension by using small and inadequate transformers, relying on proximity effect to create the impression of a big bottom end. The NTR certainly has plenty of proximity effect, but even at a distance, you get bass that is remarkably extended and natural without being bloated. There are not many ribbon mics I’d want to place in front of a bass cab, but the NTR did a great job about half a metre from mine, and I’d love to try it on double bass.

The NTR’s high–frequency extension is likewise very unusual for a ribbon mic, and makes a real difference on sources such as percussion and acoustic guitar. I would also imagine that a stereo pair of NTRs could be a genuine alternative to capacitor mics for main pair pickup of classical and jazz ensembles, though the size of the headbasket could make mounting them in a coincident configuration a little awkward.

Ribbon mics often benefit from a bit of distance from the source, and I found this to be especially true of the NTR. Used close up, the proximity effect can be overwhelming, and the mid-range a little unnatural or recessed. For instance, on close–miked vocals I found it made sibilants and other consonants seem slightly detached from the body of the vocal sound. Backing the mic off a couple of feet somehow made the elements of the source sound knit together a lot better. In practice, this means that in most situations you’ll need a good–sounding space to get the best from it.

In the course of my tests I was able to make a direct comparison between the NTR and a Royer SF12, and I was surprised by how different they sounded. The Royer — a modern classic in the ribbon field — is physically much smaller, even though it’s a stereo mic, and can’t match the extension of the NTR at either end of the frequency spectrum. Tonally, however, it has a much brighter and more immediate on–axis sound, with a relatively strong emphasis on the upper mid-range that made it more usable close up. By contrast, the NTR’s very open headbasket means it has the brighter off–axis sound of the two. Though very different, they are both fine microphones, and if I could have both, I would!

Rode have been stalwarts of the project–studio market for 20 years now. They made their name with the original NT2, a mic which borrowed many visual cues from the Neumann U87, and I think the perception endures that their capacitor mics are affordable substitutes for the classics. For instance, most of us would be happy enough to use an NT5 in most of the applications for which we’d typically employ a small–diaphragm capacitor mic — but if we had a Neumann KM84 available for the same job, how often would the NT5 be our first choice?

The NTR seems deliberately designed to shatter this perception, and could be seen as a watershed product for the Australian manufacturer, because it has the confidence to avoid comparisons with classic microphone designs. It embodies cutting–edge technical advances that have, until now, been the province only of exclusive ‘boutique’ designers. It makes a bold and instantly recognisable visual statement that owes nothing to traditional ribbon–mic aesthetics. And rather than striving to match the sound of some antediluvian reference point, Rode have set a sonic benchmark of their own. The NTR will be a first–choice mic in most company, and who knows — in years to come, we may find ourselves judging other ribbon microphones by how well they compare with the Rode NTR.

The Rode NTR isn’t the first ribbon mic with an extended frequency response, but the other models that achieve full coverage of the 20Hz to 20kHz range are mostly specialist boutique products. Of these, only the Mesanovic Model 2 and Samar VL37 occupy a similar price bracket, neither seem to have UK distribution at the moment, and both are passive models, meaning you’ll need a preamp with plenty of clean gain. Other full–range ribbons such as the SE Electronics RNR1 and Sandhill 6011A all cost at least twice as much as the NTR. If you’re more interested in owning a great–sounding ribbon mic than in eking out the last few kHz from your source, there are plenty of other mics you could consider at around the NTR’s price, such as the Audio–Technica AT4080 and 4081, Coles 4040, Beyer M130, AEA R84 and Royer R101.

The NTR is a bold and confident statement from Rode, offering cutting–edge ribbon–mic performance at a very appealing price.