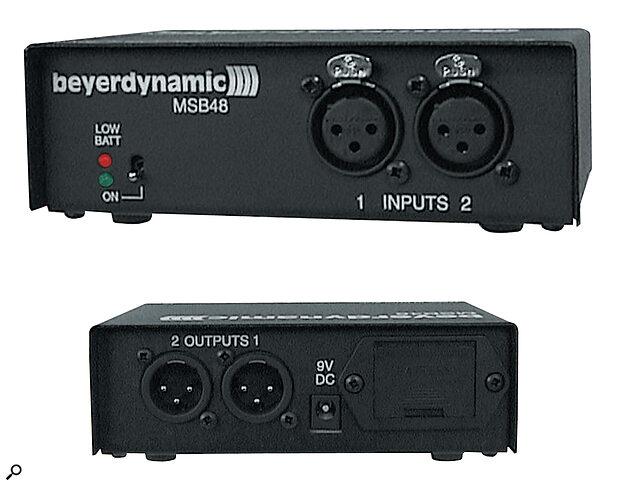 The affordability and compactness of Minidisc, DCC and smaller DAT recorders makes gathering location sounds a lot easier than it used to be but, as ever, you still need a good microphone to make good recordings. In the context of location recording, this means that you need a microphone with a good frequency response and a high sensitivity, attributes which tend to belong primarily to capacitor models. However, the problem with true capacitor mics is that they require phantom power to operate and will often not work at levels below the standard 48 Volts. Sadly, the vast majority of portable recorders provide either no phantom power at all or only a low‑voltage type designed for cheaper electret mics. What's more, separate mic preamps offering phantom power tend to be mains units, so what's the solution?

Clearly the answer is to provide phantom power from somewhere other than the recorder, and to use a source that can be driven by batteries. Technically you could get away with five 9V batteries in series (plus the necessary isolating capacitors), but this would be both expensive and bulky. A neater option is to buy a battery‑powered phantom supply such as the one reviewed here, which uses a small solid‑state voltage multiplier to deliver full 48V phantom power from a normal 9V PP3 battery.

Housed in a tough steel box, the MSB48 provides two channels of phantom powering via conventional XLR connectors. A small toggle switch turns the phantom power on or off, its status indicated by the associated green LED, and a red LED indicates when the battery is low. As with a smoke alarm, the MSB48 will tell you the battery power is low when there's still enough juice left to run an E‑bow or a fuzz box for another six months, but if you're worried that your batteries may run out at the wrong moment then there's also an external PSU input you could use if you're within reach of a mains socket. My only reservation about the build of the unit is that I feel it is bulkier than it needs to be. The case needs to accommodate very little, other than the XLR connectors and the 9V battery, and I imagine a more careful design could have possibly halved its current size (90 x 130 x 45mm).

To use the MSB48, it must be connected between the mic and the recorder's mic preamp. Once the mics have been plugged in, the phantom power may be switched on and you're ready to record. In practice, the MSB48 works fine and, even though it may seem a little expensive for what it does, it's built to last. Paul White