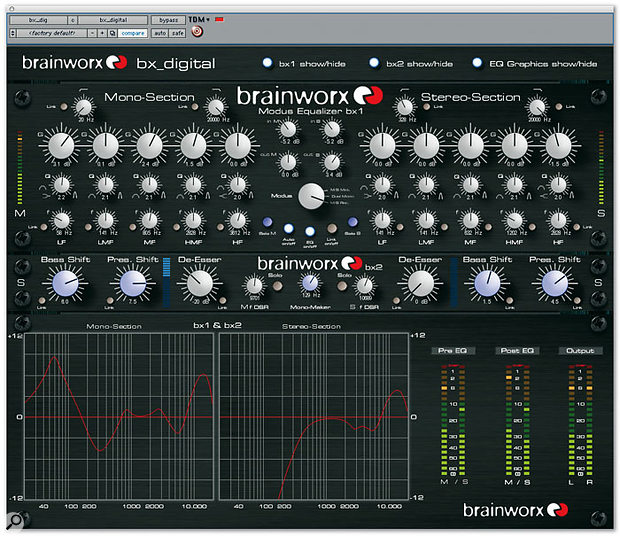 Brainworx are a German company who started out making hardware mastering processors. Now they've taken their BX1 Modus EQ and their BX2 Image Shifter/De-esser, and combined them to produce what they describe as an 'enhanced digital emulation' in one plug-in. BX Digital is available in RTAS and VST native formats, and also as a TDM plug-in for Pro Tools and Creamware Scope systems. The TDM versions offer some additional functions, such as insert slots in the Scope version and extensive support for Digidesign's Icon control surface.

The most interesting feature of this plug-in is the option to EQ using M&S techniques. M&S stands for Middle & Sides, and is otherwise known as Sum & Difference. It can be used as a stereo recording technique by setting up a forward-facing mono cardioid mic and a side-facing figure-of-eight mic. The cardioid 'middle' mic is then sent to both channels in equal amounts, while the figure-of-eight or 'side' mic is also routed at equal levels to each channel, but with its polarity reversed in the right-hand channel. This means that when you combine the left and right channels to collapse the mix to mono, the figure-of-eight mic gets cancelled out and you're left with the forward-facing cardioid mic. This makes M&S recording very mono-compatible, and means broadcast audio engineers use it a lot.

However, it's also possible to convert conventional stereo signals into M&S format by putting an LR stereo signal through something called an M&S matrix. This makes it possible to process the signal in ways that are not possible with standard LR signals. You can, for instance, EQ the 'M' channel, which is the content that is the same on both channels of the stereo (the sum), separately from the 'S' signal, which is any content that is not equally on both channels (the difference). The ability to EQ the M&S version of a stereo signal opens up a new range of options and possibilities for processing audio, and can be very helpful in mastering. BX Digital also features separate de-essing and 'image shifting' features.

You can do M&S processing with conventional plug-ins by setting up an M&S matrix in the Pro Tools mixer, routing the 'M' and 'S' outputs to two EQ plug-ins and then using another M&S matrix to convert them back to conventional stereo, but it is not easy to choose which settings to link, and you run into problems trying to monitor the 'S' signal properly. The BX Digital plug-in has the necessary M&S matrices built in, and its unique feature, according to Brainworx, is that it makes it possible to solo the 'M' or 'S' signals. In other words, you can listen to only the 'M' or 'S' component of your mix, and work on these two signals independently.

Why is that so unusual? Well, although the 'S' signal is included in a normal stereo signal, it is not in-phase on both channels, so normally, if you solo the 'S' signal, you will hear the in-phase version in one speaker and the out-of-phase version in the other, which makes it very hard to judge what is going on in that channel. Brainworx have set up BX Digital so that when you solo the 'S' channel within the plug-in, you hear it in-phase on both outputs.

My first impression of BX Digital is that is a big plug-in in terms of the screen real-estate it takes up. I have two 19-inch LCD screens set at their native resolution of 1280 x 1024 pixels, and the BX Digital plug-in nearly fills one of them. It certainly wouldn't fit on any screen smaller than 1152 x 870 pixels.

Although the M&S support is a big selling point of BX Digital, all the versions other than the Scope implementation can also operate as conventional stereo processors thanks to the Modus switch, which determines whether you are in normal LR or M&S modes. A third setting puts BX Digital into M&S mode but disables the input M&S matrix, and is for signals that are already in M&S format. 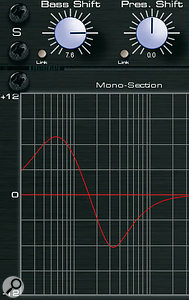 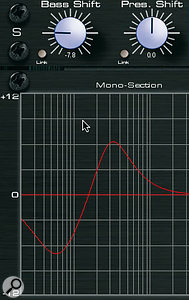 The Bass and Presence Shift controls are described as 'intelligent EQ'; their effects are visible in the graphic display here.After the M&S matrix, your signal encounters the BX1 EQ section. This is a five-band parametric EQ, with low and high bands that also offer shelving options. There are separate Input Gain controls for left and right channels, to help you balance out mixes that are not 100 percent centred, while individual 'M' and 'S' Output Gain controls allow you to control output balance and the stereo width of your mix. There are individual Link buttons all over the plug-in that you can choose to use where appropriate. The TDM version also features low- and high-cut filters.

After the EQ comes the BX2 section, which features Bass and Presence Shift controls. These are 'single knob' controls that boost preset frequencies whilst cutting an adjacent band. There is also an M&S de-esser with adjustable EQ and individual Solo button to monitor the side-chain, so you can hear what is being taken out. A Mono Maker control allows you to take low-frequency content out of the 'S' channel, turn it into mono and put it into the 'M' channel, to maintain the overall bass level while narrowing the stereo field in this region of the spectrum only. This feature is designed to assist in vinyl mastering, where large amounts of stereo low-frequency content are very difficult to cut.

Beneath the BX2 section is a graphical display that shows the effects of the frequency adjustments made in both the BX1 and BX2 sections. Unlike other EQ plug-ins, it's not possible to click and drag in the graphical display to change your EQ settings. Brainworx say that "mastering music is all about making cautious changes to your mix and when we tested BX Digital, working in the EQ panel often led us to making pretty big changes very fast. In the end we also wanted to give you the 'feel' of the hardware as authentically as possible, so we decided to make the EQ panel only a visual guide tool for what you do with the knobs of BX Digital." Personally, I feel this is a mistake. I find adjusting knobs with a mouse from the screen to be a counter-intuitive process. In addition, I would have liked the display to show different coloured lines for the BX1 and BX2 sections, so I could see what each section is doing individually, as well as the overall EQ shape.

On the plus side, Brainworx have put a lot of thought into making BX Digital work with Pro Tools control surfaces. It works on all the approved surfaces, even the lowly Command 8, so you can adjust the settings using real knobs on your preferred controller while reviewing the changes with your ears and eyes. The control-surface implementation includes what I believe to be a unique feature. With the Auto Solo button enabled, whenever you adjust any control BX Digital will automatically solo the appropriate 'M', 'S', 'L' or 'R' channel. As soon as you let go of the control, BX Digital will switch back to normal stereo output. This feature works with touch-sensitive control surfaces such as the Icon and the Command 8 too.

EQ'ing in M&S mode takes some getting used to, and Brainworx advise that the M&S mode is better for making small adjustments, leaving any big changes you might need to the LR version, so it is best to run two instances of the plug-in, the first in LR mode and the second in M&S mode.

To make sure that the matrixed 'S' channel only contains the difference signal, you need to make sure the left and right input gains are set correctly. If the left and right levels are offset, before you attempt to do any EQ'ing, you should adjust the input gains while soloing the 'S' channel to tune out any mono content from that channel. This would perhaps be easier with a ganged input gain control and a separate input balance control; I found that when dealing with content that is close to digital full-scale (0dBFS), as you often are in a mastering context, you need to reduce the input gain to give you some headroom to boost selected frequencies without hitting your system's limit, and I had to take care to reduce each input gain control by exactly the same amount.

Having separate control over the 'M' and 'S' output levels is very useful, especially for adjusting overall stereo width by increasing the 'S' channel gain, because this is a completely mono-compatible way of broadening the stereo image.

I thought I would find the Bass and Presence Shifters too restrictive, in that there is no adjustment of the frequency ranges they operate in, but in reality they seemed to do what I wanted. Having de-ssers in both the 'M' and 'S' channels is excellent, as it enables you to de-ess a centrally panned vocal while leaving the cymbals in the kit sound alone, as they will not be central and so will be mainly in the 'S' channel. Conversely, if you are presented with a mix that has a splashy reverb, you could use the de-esser on the 'S' channel to contain that without killing the brightness in the vocal on the 'M' channel.

I liked the Auto Solo Mode to start with, as I could instantly hear what effects any adjustments had on their respective channels, but found that once I was in the right ball park I tended to turn it off, as I wanted to hear the overall results, especially of adjustments on the 'S' channel, as any change there will always affect the stereo image.

For me, this plug-in didn't have a particular 'sound', and it is probably no bad thing for a mastering EQ plug-in to be neutral. However, it does need to be a helpful tool, and Brainworx have achieved that, in my view, with the exception of the graphical interface offering knobs. However, this is offset by the excellent control surface support. For anyone who likes mastering using M&S techniques, this plug-in makes it so much easier to manage and monitor your work.

There are a number of mastering EQ plug-ins, including Izotope's Ozone 3, PSP's Master Q, Waves' Linear Phase EQ, Massenburg's Hi-Res EQ and the Sonnox Oxford EQ, to name a few possible options. However, I'm not aware of any other EQ plug-in that offers M&S processing built in, so that makes BX Digital unique.

BX Digital is an excellent mastering EQ plug-in which, if it were used in conjunction with a multi-band compressor and a mastering limiter, would make for a very powerful mastering suite.