Your bargain DSLR may be able to shoot wonderful cinematic video, but its audio quality and connectivity are unlikely to meet a Sound On Sound reader's high standards. Beachtek suggest a compact solution... 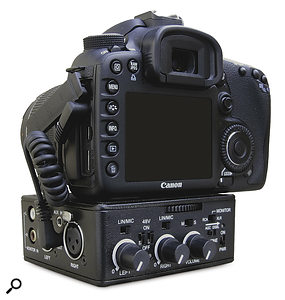 Despite an explosion in the use of DSLRs for shooting music videos and interviews, using such still‑image cameras for video purposes is not without some well‑documented drawbacks. Aside from issues relating to image quality and usability, DSLRs share a problem with budget camcorders: poor audio connectivity and preamplification.

Many DSLRs and hybrid still-and‑video cameras include a built‑in mono or stereo microphone of questionable quality, with only a mini‑jack socket for connecting an external mic. Some models, such as the Canon 7D and 550DRebel T2i have built‑in AGC (Auto Gain Control) — a form of low‑quality automatic compression — that can't be deactivated and wrecks the dynamics of your audio. Enter the Beachtek DXA SLR, a specialised preamp designed to solve these DSLR audio issues by providing XLR connections, phantom power and a pilot tone for disabling built-in gain reduction, all in a convenient, lightweight, camera-mounted box.

The DXA SLR itself is nice and robust, without being too heavy, something that's always a bonus when you're going to attach it to a camera. It's powered by a single 9V battery and, while this may seem like a silly point, has one of the nicest battery cradles of any 9V-powered device I've ever used. It's a sliding tray in the side of the body, complete with convenient slots for the connectors (to ensure a snug fit) and a sensibly tense spring to keep the battery in place. It's a great detail.

The two XLR inputs are switchable between mic and line level. An auxiliary 3.5mm input is provided, too, just in case you need to feed a stereo line source into the camera but don't want to unplug it from the Beachtek. Finally, there's a pair of RCA inputs, which are for monitoring external sources (not for recording).

The gain knobs for each input channel are detented, so both can be set to precisely the same gain level. A headphone amp with mini‑jack socket allows monitoring of the inputs before the signal reaches the camera, so you can spot any awkward bumps or clicks as they happen. On the underside are three switches: a two‑position gain sensitivity setting for each channel, and a 'ground' switch for eliminating associated earth hum.

A small switch on the control panel activates the 20kHz, ‑24dB 'AGC Disable' pilot tone, which serves to trick the automatic compression of afflicted cameras by providing a constant level of volume, at a supposedly inaudible frequency. The tone is carried through the left channel only, leaving the right channel completely clear, as well as compression free. 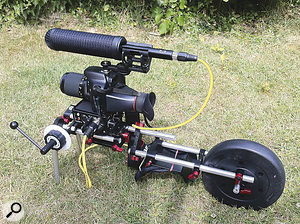 Here's the DXA SLR in use with the Canon , on my own custom DSLR shoulder mount. Although I don't use all of the attached kit for every shot, the weight of the Beachtek was negligible once added to such a sprawling construction.Attaching the unit to the underside of your camera is nice and easy, with a standard tripod thread tightened using a large thumb‑wheel, while the rubber matting on the top surface of the DXA SLR ensures that it doesn't shuffle itself free in general use. At around 340 grams, the weight of the unit is noticeable, but not a huge burden. Considering the fact that, without this adaptor, my shoulder rig plus a lens and counterweight weighs about 5kg, the little extra wasn't too much of a burden. Even in a simple hand-held configuration it's no great strain on the wrists.

The detented knobs are clearly marked, so it's easy to be sure of uniform level of gain across both channels, while the signal LEDs flash either green or red to show signal and clip, respectively. It's not comprehensive metering, but it gives you an idea of when you're in the right ball‑park, signal wise.

Using the pilot tone to disable the AGC on my Canon 550DRebel T2i definitely worked: I could hear the brutal compression relent as soon as I flicked the switch. The pilot tone itself, however, is not as pure as it could be, and seems to contain some harmonics. Playback on different systems revealed different amounts of high‑frequency tones in the left channel, depending on the performance of the playback system itself.

Using a setup with high-quality conversion, the tone was barely audible, but certainly there. Playing back through the camera's own mono speaker, however, it was a very loud squeal! This is probably due to the huge amount of distortion produced by the tiny transducer buried in the DSLR body, but it serves to prove that the pilot signal is not completely hidden.

For this reason, I'd be hesitant to use the AGC Disable system for any two‑channel work where heavy post‑production was due to be applied. The idea of having to low‑pass filter all of my audio, just in case the playback system picks up the pilot tone and runs with it, does not appeal. For the majority of video work, though, where the destination is heavily compressed online video, it should be fine, and saves time and effort. Of course, if you're only working with a mono source but need to disable AGC, use the right channel for your audio and the left for the pilot tone, and it won't be a problem.

The DXA SLR is a useful piece of kit. The only real niggle for me is the lack of metering, although Beachtek do make a passive version with full metering (see box, above right). I'd love to see a version with both metering and phantom power, as many DSLR cameras don't have on‑screen metering by default, and a dedicated LCD is a great reference. I often set the gain a little too high when using the LEDs, and found the recordings had clipped slightly.

The usefulness of the AGC Disable pilot‑tone depends on your hardware. Canon updated the firmware for the 5D MkII to include manual audio control, while third‑party firmware that's available for some other DSLRs, such as the Magic Lantern Firmware for the 550DRebel T2i, adds manual audio level control and metering.

If your firmware allows such control, you can simply connect a mic using a jack, avoiding the need for XLR inputs. However, using a stand-alone preamp like the DXA SLR is an improvement over preamplifying via the jack socket on a DSLR, which uses very low‑grade analogue and digital preamplification circuits in combination, making for a noisy result!

The quality of preamplification from the Beachtek is on a par with most XLR‑equipped portable recorders, and the tone is very solid, 'mid-rich' and suited to vocal work. It doesn't have the three‑dimensional and open characteristics of a high‑end preamp, but such esoteric circuitry would be wasted alongside the preamplification and A-D conversion built into the camera.

The greatest strength of the DXA SLR is convenience. Being small and lightweight, but robust enough to take some knocks on‑set, it makes adding XLR inputs to a DSLR simple, reliable and untaxing. Like any such system, it adds some cabling, but this isn't terribly inconvenient, especially compared to other DIY solutions.

If I were making a feature or short film and had the crew members, I would certainly record sound and vision separately, using one of the many portable recorders available. For other work, like interviews or run‑and‑gun documentary work, something like the Beachtek is ideal, as it allows you to work with fewer crew members, cables and buttons to worry about.

There are a number of alternatives for providing better quality audio for video, but not many direct competitors to this product. If you want to record audio separately, the popular Tascam DR100 (£334$299) and the Zoom H4N (£269$299) are complete with phantom‑powered XLR inputs, and should suffice for most tasks. If you have camera firmware that disables AGC, you could also run a jack cable from the headphone out of the recorder and into the camera, creating a backup audio track, though the 'snake' of cables may be inconvenient. If your firmware does not allow AGC to be disabled, one alternative is to build a splitter cable and use a miniature iPod to play a constant 20kHz tone, while a battery‑powered mic is plugged into the other channel. It's not elegant or very convenient, but it's inexpensive.

As well as the active version reviewed here, Beachtek produce a passive XLR preamp adaptor, the DXA 5DA (£239$329), for use with battery‑powered microphones. The key benefit of this passive adaptor is metering: an LCD display gives precise feedback on signal levels reaching the camera. The controls on this unit are pretty much identical to those on the DXA SLR, but the lack of phantom power limits the type of mics you can use with it. If you know for a fact that you'll only be using powered mics with the unit, the DXA 5DA is a worthy alternative.

The Beachtek DXA SLR is a solid method of adding XLRs to a DSLR or small camcorder, and solves the problem of auto gain‑control in certain models. There are other ways to address these issues, but none are quite so convenient as screwing this box underneath the camera and forgetting it. Though it could do with full metering, it's solidly made, provides 48V phantom power and runs with single 9V battery. In all, it's very useful for DSLR videographers.