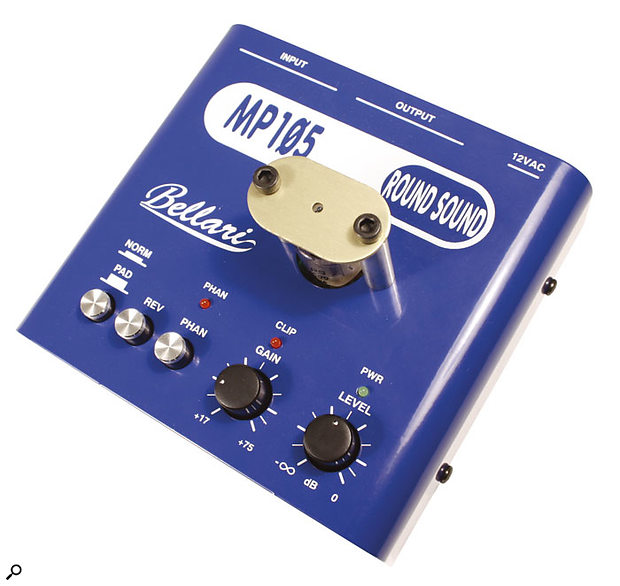 This no-frills tube preamp provides a simple way to warm up your mic and line sources while recording.

Bellari have a knack of making equipment that performs considerably better than its appearance might lead you to believe. The latest of their offerings to end up on my desk is the MP105 mic preamp, a hybrid solid-state/valve preamp for desktop use. Housed in an all-steel case, it is distinguished from its competitors by its vertically mounted 12AX7/ECC83 dual-triode tube, which pokes through the top of the case and is protected by a metal plate supported on two sturdy steel pillars. Bellari products are made in the United States, whereas many of their competitors have moved production over to the Far East, so they have adopted cost-saving engineering techniques such as putting all the components on a single PCB to eliminate unnecessary wiring. Done correctly, this can also improve reliability. 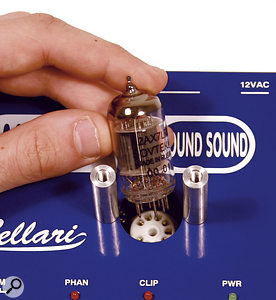 If you wish to replace the 12AX7 tube within the MP105, you first need to remove the metal cover plate with an allen key. Once this has been done, you can easily remove the valve from its plastic multi-pin socket by hand.Power comes from the included external 12V AC PSU, which is the first clue that the tube runs at a relatively low voltage. This is not necessarily a bad thing (all the obvious competitors do the same) and it does extend tube life considerably, though it also means that the tube overdrive characteristics won't be the same as for a tube with a high cathode voltage. The other clue is that exposing the tube in this way would almost certainly not be allowed if breaking the glass could expose the user to potentially lethal voltages. Voltage doubling is used to provide the necessary 48V phantom power supply, but it would be pushing things to multiply the output of a wall wart to provide around 200V for the tubes.

Balanced inputs and outputs are provided on XLRs, with unbalanced ins and outs on jacks. The input jack may be used with line-level sources or instruments such as electric guitars, and the XLR input is also happy dealing with line levels, as long as the Pad switch is in. Mics are normally used with the XLR input, and phantom power can be applied to the XLR input using the button on the top panel. A red LED indicates when the phantom power source is active, and a further green LED shows that the unit is powered. Two similarly shaped buttons provide phase inversion and a pad function. The pad drops the signal level by 37dB, and so effectively works as a mic/line sensitivity switch — however, some capacitor mics used close up may need the pad to be switched in.

The Gain control provides between 17dB and 75dB of gain, and has an associated Clip LED that comes on 3dB prior to clipping, rather than simply telling you when it is too late! However, slightly more comprehensive level metering would have been useful. Internally, the gain structure of the device allows you to drive the tube fairly hard before the output stage clips, so you can use the tube to add a little extra warmth if required. 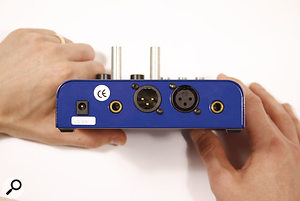 Inputs and outputs are provided on both jack and XLR connectors, with the jack input accepting both line and instrument signals.The technical spec of the units shows a 20Hz-25kHz audio bandwidth (±3dB) and the maximum output level on the XLR socket is +16dBu (12dBu for the jack). The signal-to-noise ratio is better than 88dB, and the total harmonic distortion is under 0.15 percent, unless deliberately induced by driving the tube hard. While this isn't a particularly low THD figure, the whole idea of having a tube in a product of this type is to introduce a little vintage colour into the signal path.

I tested the MP105 with a selection of dynamic, capacitor, and back-electret mics, and the first thing I noticed was that tonal differences between the various microphones were retained quite clearly. Advancing the Gain Control to get the Clip LED flickering on peaks certainly warmed up the sound in a way that flattered and thickened vocals, but the differences between the mics were still clearly audible, as they should be.

My only criticism, and this applies to a number of preamps I've tested in the past, is that beyond the three-o'clock control position the remaining gain seems to come in very abruptly, so any fine-tuning in this region is almost impossible. There's also quite a bit of audible noise during the time the phantom power supply charges up or discharges, so it's wise to have the monitors turned down while switching phantom power on or off.

Other than these minor irritations, the unit performed well, delivering a solid and musical sound with an acceptably low level of background noise. Its output level is high enough to drive most soundcard inputs adequately, and the user interface couldn't be simpler.

If you like the idea of a tube preamp, but don't need all the other features that usually come as part of a voice channel, the MP105 is definitely worth trying.