Ethno World is advertised as being the ultimate sample library for ethnic instruments and voices from all over the world, which I guess includes just about anything that isn’t typically found in a western classical orchestra or used by standard rock, jazz and electronic bands. Given that the world is a big place, it’s not surprising that the library comprises 28,789 samples and 320 distinct sound sources, and is over 21 gigabytes in size. 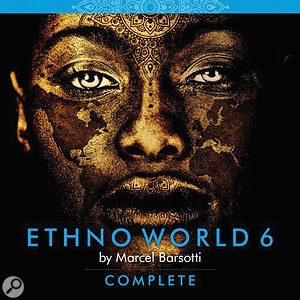 The Complete version of Ethno World (reviewed here) combines a 14.9GB Instruments library and 6.53GB Voices library, but either component can be purchased on its own if the other is not required. As for the 6 in the title, that tells us that there have been five previous versions (spanning 16 years), and therefore many opportunities for Best Service to refine the interface design and expand and improve the sound palette.

Voices is divided into folders for North America, South America, Europe, Africa, West Asia and East Asia, and each of these has sub-divisions relating to specific countries or musical styles. In the South America folder, for example, there’s a Jamaican Voices sub-folder containing a set of reggae licks. As for Alpine Yodelling, Gregorian Chants and Human Whistling, they are sub-folders nestling inside Europe. Indeed, Ethno World is very folder rich, so it does sometimes take a while to search through and find what you’re after.

The Instruments library is even more folder heavy, but instead of focussing on country of origin, the designers have grouped certain types of instruments together. Woodwind and brass are separated from bowed instruments, for example, and there are individual folders for keyboard instruments, drums, and stringed instruments. It’s certainly worth setting aside a couple of hours to explore all the instrument types and read the descriptions that are provided by the Info tab pages within each interface, just to get to grips with what’s on offer. Not only is there a picture of the original instrument and notes on its construction, there are also details on how the real thing is played and how that has been implemented within Kontakt, which is all very useful to know when trying to settle on the right thing for a job.

The Kontakt interfaces themselves are reassuringly standardised throughout all the folders and across both the Vocal and Instrument libraries. By default, all interfaces open on the Quick Edit tab view, which is the first of six page views. Here, the user is given a panel of sliders for making fast adjustments to things like the sample speed, tuning, start point and starting range. Its neighbouring panel has a similar set of sliders, but these tackle volume, pan, velocity, pitch-bend range, attack, release and low- and high-pass filtering. Edits made with the sliders work on a sample-by-sample basis, unless the Edit All button is activated, in which case all the samples that are assigned to that particular interface’s virtual keyboard are affected together.

If the sliders on the Quick Edit page are not quite doing the job, the user still has the option of making more in-depth sound modifications. On the Group Edit page, for example, it’s possible to shape ADSR envelopes for the volume and high- and low-pass filters, and to alter things like cutoff frequency and resonance percentage. Elsewhere, on the Microtuning tab, very precise tuning alterations can be made to each note in the scale, with the help of a click-and-drag graphic.

Another way to affect the samples is offered by the Performance tab, which includes a legato mode fitted with controls that change the way notes glide into one another and crossfade. A touch of randomness can also be introduced via the controls of the Humanize section, and there’s even a section for introducing two user-specified harmonising notes.

A convolution reverb is always in view regardless of the selected tab, but other effects can be added and adjusted using an Effects tab, where there is a compressor, EQ, delay, chorus, phaser and saturation processor.

Given that so many of the electronic dance and trance tracks from the mid-1990s featured soaring ethnic vocal samples, it’s hard to imagine how some of the Ethno World Voices recordings can be used in a fresh and original way. It’s certainly very easy to change things like the sample start point and its attack and release characterises, and to alter the general feel of the audio using some of the in-built effects, but the software isn’t really designed for chopping things up and processing them in an extreme way. Nevertheless, the quality and range of material on offer is impressive, so I guess it’s up to songwriters to find original ways to use it!

Almost anything can be made into an instrument, so it’s unreasonable to expect the Ethno World Instruments component to be totally inclusive, however, I think most bases are covered in some way. Obviously film and TV composers will find a lot of useful material here, but jazz, rock and electronic producers could also benefit from the vast palette of sounds on offer.

Some potential buyers might be put off by the price, but when looked at on a price-per-instrument basis, it works out as a much cheaper way to purchase a comprehensive sound library than buying instruments separately. As for the sound quality, I found it to be uniformly excellent. Overall this is a solid, impressive and reliable product that confirms the adage that you get what you pay for.