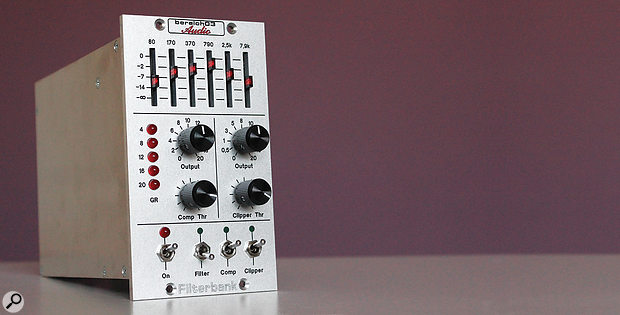 The humble band-pass filter forms the basis of this fun little 500-series module.

Don’t let the cluster of vertical sliders fool you: Bereich03 Audio’s Filterbank is not a graphic EQ. Don’t let its quiet, understated aesthetic mislead you, either: in stark contrast to the company’s previous products — all of which have been of very high quality but fairly conventional in terms of what they allow you to do — this is an utterly bonkers idea. And I mean that in the best sense of the phrase! Essentially, it’s a toy that designer Michael Heilrath conceived to satisfy his own creative urges. For some reason, it occurred to him that it would be fun to be able to mangle drum overheads through a series of band-pass filters arranged in parallel, and when breathing life into the idea, he decided to offer a little extra colour by including a compressor and a diode-clipping limiter.

The aforementioned vertical faders each govern the level of one of six band-pass filters which, as I mentioned, are arranged in parallel. As these only let the sound through in their own band (you have 80, 170, 370 and 790 Hz, and 2.5 and 7.9kHz to choose from), when all the faders are dragged fully down no signal passes through the Filterbank at all. Bring up one fader, and you hear only the frequencies it allows to pass. As you bring up more faders, more of the signal is obviously allowed through, but because of the nature of the filters you never arrive at a perfectly flat response. In fact, with all faders up, the frequency response is a kind of ripple, with fairly gentle peaks and troughs of up to about 9dB. So, far from being the sort of precision mastering tool I’ve grown accustomed to seeing from Bereich03, the Filterbank is all about injecting a little semi-controlled randomness and vibe.

The filters, though, account for only part of this unit’s appeal. The six filter output signals are summed to mono (the double-width format is to accommodate the controls, not to cater for stereo signals) and then fed into a two-knob soft-knee VCA compressor. Despite the minimal control set (you can adjust only the threshold and the make-up gain, and observe the amount of gain reduction up to -20dB on a five-LED meter) it’s actually very easy to arrive at the result you want, due to the compressor’s soft knee — the ratio progresses from gentle compression to 20:1 as the detector circuit’s RMS level rises further above the threshold. The idea is that you blend the different filters so that different frequencies trigger the gain reduction, and then tweak the threshold to taste. In other words, you mix the filter bands into the compressor, rather than switch in the compressor to process a filtered sound you’ve dialled in already.

After the compressor in the signal path is the diode-clipper. This has a variable make-up gain control, which allows you to add up to a maximum 20dB of boost. Again, despite the simplicity of operation, it’s perfect here, and a great way to add some edge to drums in particular.

Each of the three processing sections (the filters, the compressor and the limiter) can be switched in/out, using the toggle switches located at the bottom of the front panel. Inside, everything’s laid out neatly on three main PCBs, with high-quality components used throughout.

So, that’s the theory, but what did I think of it in practice? To be honest, I’m finding it’s character and potential rather difficult to put into words, as I’ve never stumbled across a processor quite like this in hardware form before. But what I should say up front is that I absolutely loved it! It’s the kind of device that invites you to grab the controls and start playing — you just experiment with the knobs and faders until you achieve a sound that appeals and you end up with a smile on your face. And that’s easy to do because, as with all the best creative hardware tools, everything on this unit is so intuitive and feels so immediate.

As for the sound of the Filterbank, well, once again, it’s rather difficult to describe, and that’s largely because the results depend so much on the sources that you feed into the Filterbank. But it also depends whether you’re processing the whole signal through this device or using it in parallel with an untreated signal — the filters change not only the level but also the phase in each band, of course, and if you blend the result back with an untreated version (I’d have loved to see a wet/dry mix knob to make that easy) then the phase relationship becomes yet another ingredient in the creative cauldron. If you want to hear what’s possible, then I suggest checking out the video demonstration on Bereich03’s site (www.bereich03-audio.de), which shows a variety of sources being processed.

The sound of the compressor and limiter when used alone are more conventional, but the whole point of those is that they interact with the filters that precede them in the signal chain. That said, it’s worth me pointing out that you could bypass the filter section and use one or both of these as more humble processors in their own right.

The Filterbank was conceived with complex drum signals in mind (mono overheads, room mics, drum loops etc.), and it’s certainly better suited to complex material such as this — it gives all of the filter bands something to get their teeth into, and thus allows you to do more to the sound. But there’s nothing to stop you experimenting with ways to dirty up other sounds — electric guitars, say, or synth parts. Indeed, I could imagine that this would appeal to synth-knob twiddlers in particular, though they might have preferred a Eurorack format to the 500-series on offer here.

I did try to achieve similar results using plug-ins and my DAW’s routing, and it is possible to do that. But, importantly, I found that I had to think about it all a bit too much — that took all the fun and immediacy away, making it harder to discover a sound I liked. Being able to grab and tweak those faders is so much more rewarding!

The Filterbank isn’t cheap; compared with most 500-series units, it’s not expensive, but most of the competition for a creative toy like this will come from stand-alone devices (boutique guitar pedals, Moogerfooger boxes and so on) and it’s pricier than most of those. But none of them offers what this module does, so value for money will be very much a matter of opinion. The bottom line is that if you love it and will use it, it will be worth it. So will you love it? I’ll leave you with Michael Heilrath’s own words, with which I agree wholeheartedly: “If you don’t like drastic processing, this is not the right module for you. For all others, I think you can have a lot of fun with this little bastard.”

Blending parallel band-pass filters, VCA compressor and diode-limiter, the Filterbank is immense fun in use, and makes it easy to achieve interesting and distinctive filtering effects. Well worth investigating!