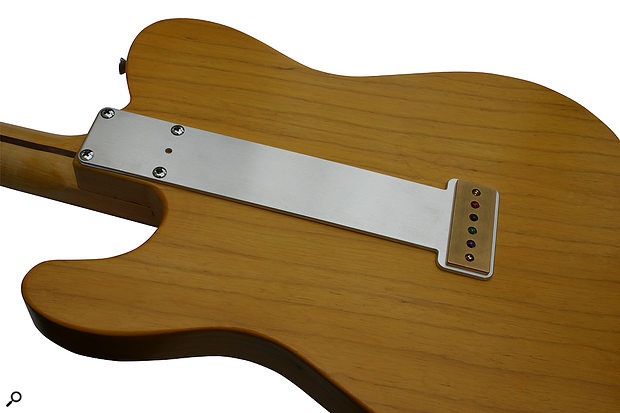 Backbone Guitar Products’ metal plates are direct bolt-on replacements for the standard neckplates of Tele- and Strat- style guitars, their purpose being to lift out more harmonic detail and to promote sustain. And this isn’t just another smoke-and-mirrors product — it makes a very obvious difference.

Obviously, if your guitar already sounds perfect in every respect you may not need one, but it isn’t only budget instruments that can benefit. What’s more, the fitting of these devices is completely reversible; you can restore your instrument to its original state at any time. Both include a hole for adjustable neck tilt screws, in case those are fitted, plus a couple of thin card neck-plate shims.

In the case of the T-Bone Telecaster unit, the replacement plate is made from aircraft-grade aluminium with a thin non-scratch layer on the body side. This plate runs all the way from the neck, along the back of the guitar body to just beyond the string ferrules. A machined brass insert block (or Tusq if you prefer a more mellow tone) drops into a machined rectangle in the aluminium and has counter-bored holes that align with your existing ferrules. The brass block now becomes your string anchor, rather than the existing ferrules, and is held in place by the string tension — the strings still pass through the ferrules but the string anchor point is now connected directly to the neck via the plate. 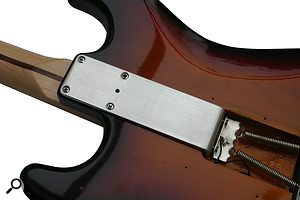 The Stratobone Strat version is a little different. This extends from the neck to the vibrato claw anchor point so, although your strings still terminate in the usual way, the springs are mechanically coupled to the neck screws via the plate rather than the claw being anchored by two wood screws. Your existing spring claw fits onto the plate, which is a little thicker than for the Tele model, using two included bolts that screw into pre-threaded holes, allowing a degree of spring tension adjustment. Two different models are available to suit US or Mexico/Squier-type Strats, in which the holes in the spring claw are differently spaced.

I could envisage how the Tele option might make a significant sonic difference — it links the end of the neck directly to the string termination point — but I was less sure what to expect from the Strat option, which couples only to the spring anchor claw. With that in mind, I fitted it to my test guitar first, as this has always been less bright-sounding than my other Strats. The difference was immediately apparent, revealing more clarity and focus, but — and this is important! — it didn’t detract from the harmonic complexity of the instrument. If anything it enhanced it and upped the overall brightness (not in a hard or harsh way), as well as adding a little more sustain.

If you want to refit the rear cover you’ll need to cut a recess at the neck end to accommodate the plate (a template is included), but you can always modify a cheap replacement to leave your original intact if you don’t want to go plateless.

Fitting the Telecaster model using the brass string anchor block also produced a more lively, ringy sound. Again, this didn’t make the harmonics sound unbalanced or clinical, and I heard a touch more sustain. The Tusq plate version also livens up the sound and helps sustain, but it may be a better choice if your guitar already sounds bright enough. So it seems giving your guitar some Backbone really can make a positive difference — though, of course, the results may vary depending on how the instrument performs in the first place.