I love using hardware delays — they practically beg me to grab their controls and interact with them in a way software just never does. And one of my favourite delay types for this sort of creative abuse is the analogue ‘bucket‑brigade’ delay (BBD), which applies a little more warmth and glorious, crunchy darkness with each repeat. It can be a great way of adding a sense of depth and movement to a sound while keeping the delay line neatly tucked behind the dry sound. 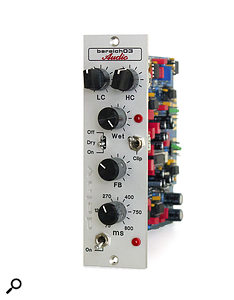 When I learned that Michael Heilrath, the man behind German company Bereich03 Audio, had created an analogue ‘bucket‑brigade’ delay for the 500 series I was intrigued. Bereich03 Audio’s devices have graced the pages of SOS a few times now, and it always puzzles me why they don’t yet seem to have become better known — without exception, all of their creations that I’ve tried to date have been very impressive: designed and manufactured in Germany; solidly built, with high‑quality components; ergonomically pleasing, with well‑planned controls and panels; and sonically pristine, except of course where deliberately adding some colour.

Their delay is classic Bereich03 stuff. The single‑width front panel is cleanly engraved down the side with the product’s simple, unassuming name: ‘Delay’. The no‑nonsense controls do just what you expect, feel nice and solid, and have plenty of space to accommodate the fattest of fingers — more important on a device like this than, say, a preamp or compressor, as you’re far more likely to want to ‘perform’ with the delay, tweaking settings in real time.

Obviously this isn’t an entirely ‘hi‑fi’ design, because bucket‑brigade delays are supposed to sound dark and vibey. This delicious darkness is something that Bereich03’s Delay does very well, courtesy of its three MN3005 BBD chips. (Check out the examples on their web site if you want to hear it in action). That said, the quality of the ‘dry’ untreated signal path is exemplary, just as you’d expect from a company who manufacture a modular mastering console. Hidden from the user’s eyes is a compander, which is used to reduce the noise floor, and 24dB anti‑aliasing and anti‑clock filters. And, thoughtfully, there are also jumpers on the circuit board to adjust the input and output levels.

On the outside, there are a number of user‑controllable parameters. At the top of the panel is a pair of pots allowing you to frequency‑bracket the signal: a high‑pass filter on the left, and a low‑pass filter on the right. As befits a creative tool, these always‑on 24dB‑per‑octave filters are wide‑ranging, the high‑pass filter being fully variable between 24Hz and 2.4kHz, and the low‑pass from 5kHz down to 75Hz. Beneath this, you’ll find another pot to set the level of the processed (wet) signal, and a small metal toggle switch to switch the dry signal on and off. Adjacent to these is another toggle, to switch a simple analogue soft clipper into the wet signal path, intended more as a means of stimulating harmonics for added character than containing the signal level. There’s also the most spartan of level meters: a single red LED, which glows brighter as the signal level increases.

This just leaves the three controls for the delay line itself. Most obviously, the two pots govern the delay time and the amount of the signal fed back to the input to generate those ever‑darker, crunchier repeats. The delay time can be set anywhere between 75 and 800 ms (by way of illustration, the latter figure would give you a quarter‑note echo at 75bpm). The feedback control goes from nothing (a single echo) up to far too much for any sane person, and I mean that in a good way: at the three o’clock position, the effect will self‑oscillate, so you can set it for anything from a simple slap‑back to the most psychedelic of swirling textures. It’s worth noting that these are old‑school analogue variable pots, so there’s no way to recall a delay setting once you start twisting the knob — other than to listen and tweak. 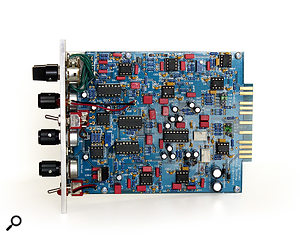 There’s one more delay control, whose purpose it would be easy to miss: the On switch. This isn’t, as I’d first assumed, an on/off switch for the unit as a whole. Rather, it switches off the audio input to the delay line, the result being that no new sound enters the delay line, but the feedback tail will keep on running and can still be manipulated using the time and feedback controls.

I was sent a pair of modules for evaluation, and while they’re not stereo‑linkable it was great to be able to set them up with my DAW as a stereo send effect. In this setup, it was useful to be able to switch the dry signal off completely with the toggle switch, without interfering with the wet level. But while most of my tests (I’ll admit that in this case that’s largely a codeword for playing with a fun toy!) involved patching the delays in as send effects and running various sources through them, I also tried them as an insert effect, in which scenario it was helpful to be able to switch the dry signal on, and raise the wet level to taste. A less obvious application for that dry Off switch is to flick it in time with the music (there are no obviously audible clicks or pops, and the toggle switch seems robust enough and well secured to the faceplate), so you can send only certain elements into the delay — it’s easy, for instance, to use the delay as a spot effect on a snare drum in a drum loop in this way, or to send a rhythmically chopped signal from a pad sound through the delay.

Putting the actual delay side of things to one side for a moment, the circuitry is wonderfully quiet: these modules remained pleasingly free from the annoying hums and hisses of so many vintage boxes and pedals. Thus, despite its vintage roots, Bereich03’s Delay would not seem at all out of place in a modern DAW‑based setup.

But let’s be honest, you’ll be more interested in the delays... I ran all manner of different sounds through the two modules, including vocals, guitar, synths, Rhodes and drum loops, and while nobody could look to a BBD device to deliver every kind of delay sound you might want, I always found the results both characterful and engaging. The deliberately dirty sound was a joy to behold, and being able to grab and tweak the key parameters led me instinctively to experiment in a way that I just wouldn’t ‘in the box’. In fact, the biggest thing I’d like to say about Beriech03’s Delay is that it is so immensely fun and satisfying to play with. I’ve spent much time lately working entirely with plug‑ins, and this module reminded me just how rewarding it can be to be physically engaged with the music you’re making; I’ve brought a few other old boxes and pedals out of their mothballs since testing these delays!

It would have been nice on occasion to be able to be a little more precise with the timing, but I was also reminded how liberating it can feel to break free from the constraints of tempo‑related timing and musical subdivisions. That said, I did on occasion find myself wishing for some other means of controlling the delay time, whether that be the elaborate sort of MIDI‑control setup employed by (to my knowledge the 500 series’ only other BBD) Moog’s Analog Delay 500, or some sort of tap‑tempo button or pedal input, as you’d find on a guitar stompbox or synth module. The MIDI solution would be expensive to implement (you can almost buy two of these for the price of a Moog) but the latter options could perhaps be a practical lower‑cost addition to a MkII version in the future?

In short, then, I loved these neat little delay modules. They’re nicely built, easy to use, sound great and are wonderfully engaging. They combine the vibe of an age gone by with the low‑noise performance that’s important today if a device is to integrate properly with our software‑based studios. My one misgiving was the lack of ability to recall delay times — it would be so nice to be able to go wild with the controls, safe in the knowledge that I could return to an earlier setting. But if you just want a static tempo‑sync’ed delay, it’s easy enough to set one up by using a click and a short feedback setting and tweaking the delay‑time knob manually.

I thoroughly recommend Bereich03’s Delay; it’s by far the most affordable analogue delay module for the 500 series, but in terms of both its sound and its build quality it is also up there with the best.

In the 500 series, there’s only one obvious alternative, the Moog Analog Delay 500, but while this adds a lot more in terms of features it is nearly twice the price. An alternative would be to look to the world of stompboxes, where you’ll find genuine BBDs such as MXR’s Carbon Copy, as well as studio‑quality digital emulations like Strymon’s Brigadier.

A simple but stylish addition to the 500 series, the Bereich03 Audio bucket-brigade Delay marries real old-school sound with modern sonics, and it is competitively priced.