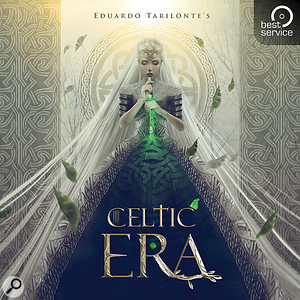 Eduardo Tarilonte’s libraries always guarantee something special and unusual. Focusing heavily on instruments of ethnic origins and the past, they’re a goldmine for anyone scoring for movies, games or any music that needs a touch of magic. Whilst Celtic Era features instruments generally associated with Ireland, many of them are typical of historical and traditional music from around the British Isles and beyond. This 18GB library runs in Best Service’s Engine, and as always Mr Tarilonte has sampled everything in great detail, using skilled players and a combination of varying dynamics, performance artifacts and keyswitched articulations.

Twenty three instruments are grouped into six categories: Winds, Strings, Percussion, Keyed, Ancient and Soundscapes. Wind instruments include the essential Irish flute and two whistles, with all the on-the-fly slides, trills and mordents that characterise them. One nice touch is the option to choose from real, performed vibrato (baked into the samples) or to switch that off and add your own (artificial) vibrato via the mod wheel. Highland pipes with drones provide a bracing skirl, and are also appropriately detailed; the Uillean pipes are especially haunting, with authentic finger vibrato optionally engaged via key velocity. In the Strings category, the picked and fingered Acoustic Guitars stand out with a lovely full-bodied tone. Irish Bouzouki and Tenor Banjo bring contrasting colours to the fretted instrument collection, with additional patches of key-triggered tempo-sync’ed MIDI strumming patterns, playable in any key, provided for the Guitar and Bouzouki. Two Celtic harps provide what sound like fingernail and flesh-of-the-finger versions, their tonal differences making them ideal for duetting, whilst the Irish Fiddle is lively and fun to play, its ornaments and slides lending it a rather cheeky air. In the Keyed instruments, two distinctly different Concertinas are perfectly suited for sea shanties, and immediately had me belting out the Captain Pugwash theme. The amount of key clattering is fully adjustable on both, and they even include bellows noise triggered on a low C.

The Percussion category deals with all things Bodhran — the traditional Irish frame drum. There are regular and Bass versions, each played with a selection of different sticks; each patch contains just over two octaves’ worth of pre-programmed tempo-sync’ed grooves, as well as manually playable single hits and rolls. The grooves are selectable as jigs (in 6/8) or reels (in 4/4), with controls to adjust shuffle, randomised velocity, timing and pitch, adjustable time base from quarter to 4x speed, performer noises and dynamics. Tempos around 90 bpm or less work best — any faster and the rolls stray into the realms of improbability!

Travelling further back in time we find the really unusual elements of this library: the Iron Age Carnyx, an evocative trumpet-like instrument used in warfare; the Cornu from ancient Roman times, its sound reminiscent of a trombone; and the soft but thoroughly menacing War Horn, with a huge selection of pre-recorded calls — some sure to send a shiver down the spine. Finally, a generous collection of Soundscapes provides pads, textures and atmospheres to round off this exceptionally colourful library.