With an all-analogue signal path and total recall courtesy of digital control, this EQ promises a lot. Does it deliver? 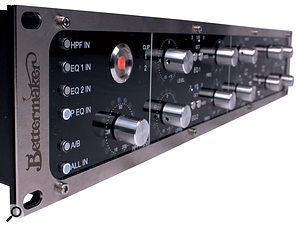 Bettermaker are relatively new-on-the-scene manufacturers based in Poland, and currently there's only one product in their portfolio: a high-end and quite innovative stereo equaliser called the EQ230P. In my book, quality is always more important than quantity (unless we're talking about pension funds!), so we'll overlook the limited product range and enjoy the fact that the EQ230P is a really interesting product that took, apparently, 18 months to develop.

In essence, what we have here is a dual‑channel/stereo equaliser featuring five individual equalisation stages, grouped into three distinct sections. Both channels are controlled through a single set of controls, shared between or allocated to each of the two channels as required. There's nothing particularly unusual about a five-band stereo equaliser, of course — although the nature of the EQ here is a little unusual and attractive — but the really interesting aspect of the EQ230P is that all of these equaliser sections enjoy full recall facilities. As you'd expect, the recall memory side of things is digital, and to ensure complete isolation between the digital control/memory circuitry and the delicate analogue audio circuitry, the two sides have completely separate power‑supply stages and all the digital control signals communicate to and interface with the analogue stages via optical interfaces. Digitally-controlled potentiometers are employed as the variable elements in the analogue filter signal paths!

The clean-cut front panel hosts a number of recallable digital controls for this analogue EQ.

The EQ230P is a very classy-looking unit and it feels well built. Internally, construction is generally to a high standard, although the circuit boards have the look of 1970s equipment, with relatively sparse PCB tracks and full-size components everywhere. The analogue circuitry is protected from the control and memory sections, and the power supply, by metal screening plates behind the front panel and dividing the unit front to back. There are real inductors in there, and lots of sealed relays for signal switching, too.

The rear panel carries a standard IEC mains inlet (single voltage), with XLRs for the audio ins and outs, the outputs having two paralleled XLR connectors. A ground-lift switch is also provided to separate the analogue signal ground and chassis safety earth. Although not currently implemented, there are plans to include a USB interface mode, which would allow the EQ230P to be controlled from a DAW plug-in — and that really would be an attractive option.

The control layout is logical enough, divided into three clear sections on the crisp, clean, white-on-black panel. Starting in the top left-hand corner, a large silver power-on push-button illuminates with a central red LED. An adjacent pair of clip LEDs warns if either channel is getting too hot, and monitors the levels between every stage to ensure optimum gain structures through the unit. It's important to note, however, that the maximum acceptable balanced input signal to the EQ230P is +18dBu, which is about 6dB lower than most high-end analogue products. The maximum balanced output level is also restricted to +18dBu. In practice, this means you could run into trouble if feeding the Bettermaker from a high-end D-A outputting full level audio.

To the left of this power button are six smaller illuminated push-buttons, which engage the various individual filter sections (high-pass filter, two parametric stages, and a Pultec-style section), as well as offering an A/B comparison function and a hardwired global bypass mode.

The high-pass filter is controlled with a single rotary to adjust the turnover frequency between 18 and 200Hz (see test plots on the SOS web site, as detailed in the 'Technical Specifications' box). A ring of 'hidden until lit' LEDs indicates the current turnover frequency of this simple 12dB/octave (second order) HPF design. When bypassed, the unit's bandwidth extends down to about 3Hz (-3dB). Interestingly, all the rotary controls are speed-sensitive; slow turns provide high resolution, while quick spins traverse the control's range much more quickly. This is very intuitive to use and makes operation both fast and precise.

The centre-panel section accommodates the two parametric EQs, each equipped with Level and Frequency rotary controls, plus increment and decrement push-buttons to adjust the bandwidth. Both sections can boost or attenuate using symmetrical constant-Q bell-curves over a ±15dB range, with bandwidths ranging from 0.2 to three octaves (Q range of 7 to 0.4). However, the two sections have different adjustable centre-frequency ranges, overlapping nicely, with 45Hz to 1kHz for the first parametric section and 650Hz to 15kHz for the second (test plots are available on the SOS web site). Again, the rotary control settings are indicated by white or red LEDs around their periphery.

The rear panel includes a cut-out for a USB port, which will add functionality to the design in the future.The third panel section is the 'P-section' — a set of passive shelf equalisers 'inspired by' the famous Pultec design, complete with separate boost and attenuation knobs. The low frequency section can be switched to turn over at 20, 30, 60 or 100Hz, using another pair of up-down push-buttons, and separate rotary controls are provided for boost and attenuation. This classic arrangement obviously allows both boost and attenuation to be applied simultaneously, and although this sounds mad, the result is actually very useful, producing a characteristic dip in the response just above the main shelf, which works extremely well in a musical context.

The high-frequency section has three rotary controls and three buttons. Again, separate boost and attenuation controls are provided, along with an adjustable bandwidth facility, while the push-buttons allow the turnover frequencies of the boost and attenuation sections to be adjusted separately. The HF attenuation turnover options are set with a single button cycling through 5, 10 and 20 kHz options, while the HF boost can be tuned to 3, 4, 5, 6, 10, 12 or 16kHz, controlled by the two remaining up-down buttons.

The final element of the front panel is the digital memory section, comprising a rotary encoder with a press-switch action to select the required memory, and a separate button to select the stereo link mode or to access each channel's setting individually. Slightly strangely, if the unit has different settings on the two channels and the stereo-linked mode is then selected, both channels assume channel two's current settings. This isn't really a problem as such, although intuitively one might have expected channel one's settings to dominate.

The memory section can accommodate up to 399 user presets, and selecting a preset memory is as simple as rotating the knob to find the required location and then pressing the knob to load the settings. Memory locations with saved presets are indicated by a full stop after the number; empty memory locations don't have the dot. The Bettermaker EQ230P ships from the factory with a few starter-EQ settings pre-loaded into the memory, including examples of typical vocal, mastering, kick drum, guitars, and more, to use as starting points and to demonstrate the versatility of the unit.

Saving current settings is similar to selecting presets: select a memory location, hold the knob in for two seconds, then rotate the knob until the display says 'yes' and push the button again. Quick, easy and intuitive, whilst also being pretty safe and foolproof! The A/B comparison function I mentioned earlier allows the currently selected memory settings to be compared with the live front-panel settings.

The EQ230P is a very interesting equaliser. Each section produces text-book accurate curves with exquisitely precise control over sensibly designed ranges. More importantly, the unit sounds extremely musical and involving, facilitating anything from gentle tonal shaping to surgically precise corrective treatment — or even both at the same time, thanks to the two separate parametric sections, in addition to a full 'P-style' equaliser.

I found the high-pass filter and two parametric sections sounded transparent, fast and clean — ultra-modern and precise — while the Pultec-derived section (which is inductor-based) provided a subtly warmer character, with an almost tangible sense of body and weight, but without the dynamic 'sag' that can afflict classic Pultec designs when driven hard, and without the iron veil of input and output transformers.

This unit really does embody the best of all worlds: precise, transparent correction and warm, musical creativity. There's nothing about the sound that I don't like, and even the user interface works well. If I have to be critical — and I do; it's part of the job specification — then I'd point at the slightly restricted headroom margin, which might be a concern in some situations. But even that can be easily managed with careful gain structures and equipment alignment.

The major selling point of the EQ230P, though, in addition to it being a superb sounding and comprehensively equipped analogue equaliser in its own right, is the memory recall functionality. This makes it extremely attractive for use in DAW-based work where an analogue character is required, while retaining the ability to access different EQ settings for different instruments or from different production sessions instantly and completely accurately. The promised USB-based plug-in interface would enhance this aspect even further, of course, especially if EQ settings could be stored on the computer and transferred to and from the EQ230P's memories.

There aren't many stand-alone outboard recallable equalisers, and none with the versatility of the Bettermaker, which goes a long way to justifying the pretty high price tag! It would serve equally well in a busy DAW-based production situation or in a mastering room, and there aren't many devices that could claim that.

I'm told that the Bettermaker boffins can also provide variations on the EQ230P to special order, with a Mid-Side version, customised frequency ranges, and even personalised logos! Clearly, we're going to be hearing a lot more from this pro-active Polish company, and I'm looking forward to it.

Few analogue equalisers have memory recall facilities, but two high-end units that do are the AMS Neve 8803 Dual Channel Equaliser and the Solid State Logic X-Rack fitted with Stereo EQ and E-Series EQ modules. However, in both cases, recalling settings relies upon the user matching the physical rotary control positions. In the case of the AMS Neve, that means matching the settings displayed on the recall software running on a computer. The SSL system employs a bi-colour LED above each rotary control, which shows red or green to indicate when the rotary control is currently set too high or too low, respectively. Both systems are considerably less expensive than the Bettermaker, but neither has such comprehensive EQ facilities, or such instant 'recallability'.

The EQ230P has a very wide bandwidth which, with all EQ sections switched in but set flat, extends between 9Hz and 40kHz (at the -0.5dB points). The bandwidth is a little wider with the EQ sections bypassed. Crosstalk is also impressive, measuring over 70dB at 10kHz with everything switched in. The signal-to-noise ratio is comfortably over 100dB, and distortion is extremely low too, although my THD+N measurements came out fractionally higher than the published specs (0.007 percent instead of 0.004 percent — nothing to worry about there!). Power consumption is a modest 15 Watts. Should you want more details, you can find some Audio Precision Analyzer test plots on the SOS web site at /sos/jan12/articles/bettermakermedia.htm

The EQ230P is an unusually well equipped and versatile stereo equaliser, combining precise HPF and parametric sections with a musical Pultec-style section — a combination of facilities that make it a very special product. However, Bettermaker have gone further and included full instant recall facilities, which makes this a unique and phenomenally powerful device.