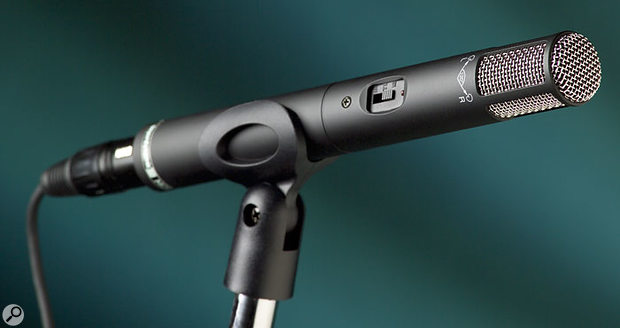 If you're looking to record high-quality audio to your portable Minidisc or MP3 recorder, then this small battery-powered stereo mic could be just what you're looking for.

The Beyerdynamic MCE72 must be the answer to many a location recordist's prayers: it is a stereo back-electret capacitor microphone that offers a near-professional technical spec, yet operates from a single 1.5V battery. This means that if you have a portable MP3 or Minidisc recorder, or a video camera with a low-quality built-in mic, you can now team it up with a serious microphone without having to worry about where to find a source of phantom power. Indeed, the Beyerdynamic MCE72 isn't designed to run off phantom power at all — it's strictly batteries only.

In appearance, the MCE72 looks much like any professional stick mic, except that a fine line around halfway up the body indicates the part where the outer shell unscrews to reveal the battery compartment. A single alkaline AA battery is all that's needed to drive the mic, and the operation time is in the order of 75 hours, depending on the brand of battery. A slide switch on the side of the body switches off the microphone and conserves battery power, and there is also an interim position that illuminates an LED to show that the battery is OK. The overall size of the mic is 25 x 196mm, and the correct orientation of the mic head is shown by an on-body schematic — the end of the mic should be pointing towards the action. A cable is included, where the other end of the five-pin XLR lead terminates in a stereo mini-jack, which is probably the most common connector type for consumer-style portable recorders. Adaptors to convert to other formats, such as quarter-inch jacks or RCA phonos are readily available.

The capsules themselves are cardioid (pressure-gradient) types and are angled at 120 degrees (plus and minus 60 degrees either side of the frontal axis) to give adequate stereo coverage under most conditions. A frequency range of 60Hz-20kHz is quoted, though without those all-important 'how many decibels down' limits, and the sensitivity is a realistic 12mV/Pa. A small frequency-response plot in the back of the manual shows the curve to be nominally flat, with a very gentle low-end roll-off starting at just above 200Hz, and the high-end starting to roll off at 16kHz or so. From this I'd estimate that the 60Hz-20kHz response refers to the -6dB points.

As you might expect from a microphone that's powered from a low-voltage source such as a battery, the headroom is somewhat limited compared with what's achievable with 48V phantom power, and in this case, the maximum SPL is only 123dB, but again this is fine as long as the mic isn't used close to something exceptionally loud — such as when recording in the same time zone as a Prodigy concert, for example! The 'A'-weighted equivalent input noise is 26dB, which is a bit on the high side if you take a typical studio mic as a guide, but again it shouldn't be a problem if you're recording medium-to-loud sources close to the microphone. If you're looking to capture the mating calls of crickets at 500 metres, expect a little hiss!

A standmount clip comes with the mic, as well as a cable and a zip-up vinyl pouch, but the optional shockmount would be a good idea when using the mic in environments prone to vibration or on top of a video camera.

My test with voice and a variety of sound sources showed this mic to be generally flat and honest-sounding, which means it will capture most sounds without undue coloration or flattery. To check its sensitivity I recorded an acoustic guitar from around 12-14 inches away, and found the signal-to-noise ratio quite acceptable, though it was possible to detect a low level of background hiss when nothing was playing if monitoring on headphones. For that reason, I wouldn't recommend using this mic for anything much quieter or much more distant. For jobs such as nearby dialogue, choir, and acoustic-ensemble recording, it should do the job perfectly well. It could also be useful for collecting sound effects on location, provided that they aren't too quiet.

Although the MCE72 falls a little short of what you'd expect from a good studio mic in terms of noise and headroom, it still provides much better audio quality than you'd normally expect from a battery-powered back-electret mic, and should significantly improve the results when recording on domestic MD recorders and suchlike. Its stereo capability is fine for most tasks, though not being able to adjust the angle between the mic capsules means that in some situations the stereo image may be slightly too wide or too narrow. As a general-purpose stereo mic for use in situations where there is no phantom power, the MCE72 gets the general thumbs up, provided that it's used within its limitations, and as a means of recording live gigs onto consumer equipment it's almost ideal. In this respect it's a bit like a good-quality 'point and shoot' camera — you can get good results provided that the subject is not too dimly lit, not too brightly lit, and not too far away!

The MCE72 delivers near-studio-quality performance in a portable battery-powered format. In this respect it provides a practical means to upgrade recording systems based around consumer Minidisc recorders or video cameras.