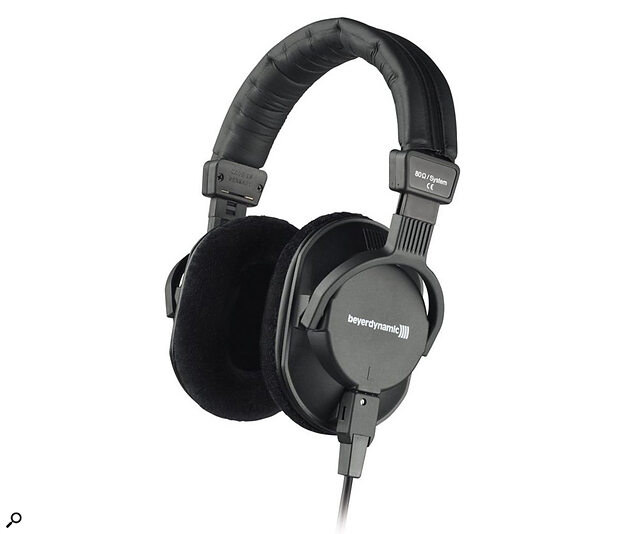 Enclosed headphones that are sensibly priced, comfortable, and sound as accurate as a pair of good monitors — is it possible?

Headphones tend to fall into two general categories: the open‑style phone and the fully enclosed phone. Open phones can sound extremely good, but tend to be bass‑light, and, of course, sound can get in as well as out. Closed phones, on the other hand, offer far better isolation against sound escaping or unwanted sound getting in, and can offer a much greater impression of deep bass, but their weakness lies in a tendency to sound boxy due to the airtight enclosure used to seal the driver to the ear. Beyerdynamic's new DT250s came as rather a surprise in that they seem to offer the best subjective qualities of both types of headphone.

The DT250s are relatively small enclosed phones which just fit over the ears, cushioned by soft, velvety pads rather than the usual fake leather. They aren't completely field‑serviceable like the DT100s or DT150s, but the signal lead is unpluggable to prevent disaster when the drummer trips over it! A gold‑plated stereo jack is fitted to the lead, and this has its own adaptor system so that it can either present itself as a quarter‑inch jack, or as a regular mini headphone jack. The headband has a reasonably positive adjustment system and is comfortably padded.

With a nominal impedance of 80Ω, the DT250s have a quoted frequency response of 10Hz to 30kHz, but as with all headphones, the bass performance is affected by how well the phones fit the listener. As many as 13 different variations on this phone are available, numbered DT250 to DT292 V.11, 12 of which come with headset mics, and six have only a single phone for those who need to work with one ear free. However, the review version is perfectly conventional in all respects.

Beyerdynamic have an excellent reputation for both microphone and headphone design, but I didn't really expect the DT250s to sound as open and uncoloured as they did. I checked them out with a variety of test CDs and was immediately impressed by the overall tonal honesty, and by the sense of deep, tight bass. I tried an A/B comparison between the DT250s and my ATC SCM20 loudspeakers, which were adjusted to produce the same subjective sound level, and found that the tonal balance was uncannily similar, right down to the bass response. Surprisingly, I could hear no trace of boxiness due to the sealed enclosure. In fact, on changing from one source to another, the only real difference was that with the headphones, I couldn't feel the bass coming through my feet — perhaps an in‑sock, low‑frequency transducer could put that right!

When it comes to stereo imaging, the DT250s are very precise, but suffer from the same problem as all the headphones I've ever tried insomuch as the soundstage doesn't appear to be in front of you, but instead seems to pass through your head. Different people perceive headphone sound in different ways, but design engineers acknowledge that creating a headphone image which appears to be in front of the listener is very difficult.

As the DT250s are so tonally accurate they can take the place of conventional monitors for the preliminary stages of mixing, although the final mix should still be checked over monitors if you are to be confident of its accuracy. These headphones are also excellent for keyboard programming late at night where you want to hear your music at an exciting level, but where your neighbours don't share your enthusiasm.

On the other side of the glass, the DT250s make fine performers' headphones due to their good isolation properties, their overall honesty, and their ability to really push out the volume when asked to do so. They're comfortable to wear, are as secure as most headphones, and the removable lead helps prevent expensive accidents.

I have to say that I'm very impressed with the DT250s, and think you'd have to spend quite a lot more money before hearing any significant improvement. The DT250s are great all‑rounders, equally suited to life in the control room or the studio. They make the original DT100s sound like a transistor radio hiding in a coconut shell, and the bass response makes my otherwise excellent open phones sound distinctly lightweight. I'm going to resist sending these back for as long as possible!

A sensibly‑priced enclosed headphone combining tonal accuracy with good sound isolation, good bass response, and the ability to put out plenty of level.