A couple of years ago, Bicci (UK), a small British company based in Yorkshire, sent me a prototype of their new wall-mounted mic stand. I remember thinking how smart it looked, and how nicely finished the metal and machined acetal components were, but there were a few aspects of the design that I'd felt could be improved before it was unleashed on the public. Bicci agreed with me and, to their credit, have since painstakingly redesigned the stand, and turned their single product into a whole range of wall- and floor-mounted stands, including mic, monitor and guitar models. The mic stands (the wall-mounted variants are called 'Micco' and the floor-standing range 'Ultimo') are designed primarily for vocalist and voice-over applications, but they could easily be pressed into service for other purposes. 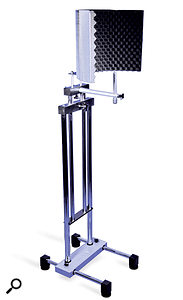 The whole range is based around a relatively simple concept that has been nicely executed, with the main mic-mount assembly being attached to two chrome tubes, which in turn are held in place by an attractive pair of black, machined acetal blocks. These are used to fasten the stand to the wall, or, in the case of the floor-standing versions, to further poles via another brace, and thence to a heavy cast-aluminium base (though not so heavy that one person couldn't lift it).

The four feet on the floor-standing variants protrude from the cast-aluminium base on chromed tubular legs, and are each independently adjustable, meaning that you can settle this on the most uneven of surfaces, like the floor of the 400-year-old cottage I happened to be testing these in — I don't think they had spirit levels back then! This is all managed within a modest footprint of less than 400mm x 500mm. Indeed, they make it sufficiently stable that my 18-month old daughter had a great time when my back was turned, using the stand as a climbing frame (without incident!).

In more real-world tests, I used a hefty valve mic. This was held in place without any problem by both the Micco and Ultimo stands. In fact, since there's no boom, as you'd find on a typical mic stand, there's no risk of developing the embarrassing — and all too-common — droopy-boom syndrome.

The height is adjustable on all versions of the stands, to the extent that a young teenager would be served by the floor-mounted model as well as would someone upwards of six feet tall. The minimum and maximum height of the wall-mounted version is, of course, determined by the height at which it is attached to the wall, but there's plenty of range.

One of the things I'd felt uneasy about in the wall-mounted prototype was that the mic would always be in close proximity to the wall. The design would have made it awkward to install acoustic treatment behind it, and there was nothing built in to do the same job. The new versions overcome this by including an acoustic shield, which attenuates the sound passing from the vocalist to the wall, and does the same job on the way back for any frequencies that have passed through. This shield isn't a compulsory part of the design and Micco have thoughtfully included a mounting mechanism to accommodate similar shields made by third parties, such as the original Reflexion Filter by SE Electronics, which popularised this concept.

I didn't detect any problems with low-frequency vibrations, such as can be transmitted by the wall or floor, in the case of any of the stands. My only criticism is that the mic can only be held so far forward from the stands, making them less versatile for non-vocal use. However, this is not an issue at all when using these stands for their intended purpose.

There are a few possible configurations, hence the long price list, and all are described in detail on Bicci's web site. These are not cheap stands, but neither are they bad value, given the high standard of finish and the pleasing aesthetics: they really are much smarter than a typical black boom stand. If you're planning to set up a voice-over booth, or want to add some tastefully understated 'bling' to your studio, these should do the job perfectly. Matt Houghton