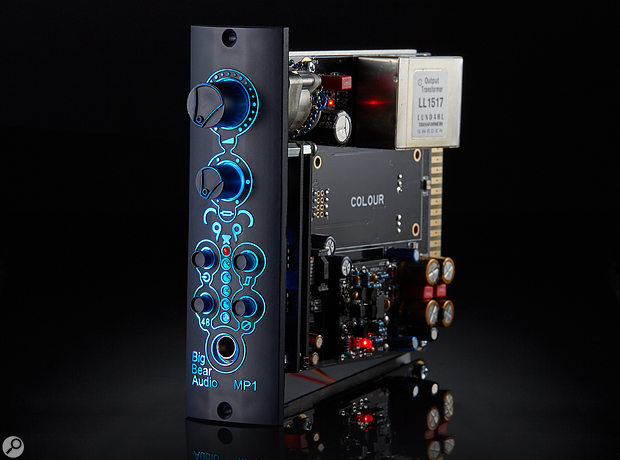 Not only do these preamps boast superb performance, they can also host one of the growing range of DIYRE Colour modules.

Founded by Charlie Slee, a young British electronics designer and engineer whose résumé includes a spell at tube audio specialists Thermionic Culture, Big Bear Audio are a recent arrival on the 500-series scene. They started out distributing DIY Recording Equipment’s (DIYRE) open-source Colour series of preamps and modules (reviewed in December 2015: http://sosm.ag/diyre-colour), but they soon turned their attention to developing products of their own, and they’re all designed and manufactured in the UK.

If you saw the MP1 and MP1+ mic and instrument preamps side-by-side in a rack, you’d be forgiven for not knowing which was which: the two share identical, injection-moulded fascias, control knobs and switch caps. Both also feature discrete Class-A circuitry that’s designed to deliver a clean, transparent performance. And both incorporate a slot that accepts hardware plug-in modules from the aforementioned DIYRE range of Colour modules.

These modules give you the option to add a little something extra to the preamps. There’s a wide and growing selection of DIY-kit and ready-made analogue effects and processors available in the format; there seems to be a bit of everything there, from distortion to EQ, compression, tape echo and beyond — even a miniature 1176!

Straight out of their boxes, the preamps’ all-encompassing dark navy-blue colouring makes both units look somewhat unprepossessing, but once you power them up, LED lighting (which is concealed behind the curved fronts of their deep escutcheons) illuminates the raised mouldings on and around the controls. It looks great and it’s every bit as informative as a conventional, screen-printed front panel. The only drawback with this approach is that it can be difficult to tell at a glance when a switched function is active, with the exception of 48V phantom power, which helpfully illuminates a white LED at the bottom of the five-LED VU meter ladder when active).

Control-wise, one rotary potentiometer (a more expensive 21-position, detented Elma switch in the case of the MP1+) acts as the gain control for the mic/line inputs, which are fed by the rear-panel inputs of the host chassis, and the front-panel instrument jack. Another acts as an output attenuator. Four push switches select the input, and activate 48V phantom power, polarity inversion and, if fitted, the Colour module.

The physical similarities and differences between the MP1 and the MP1+ become apparent as soon you look at their circuit boards. Although similar in some respects — the power supply, the Colour module mounting, and the discrete operational amplifier (DOA), in particular — the pair are most obviously differentiated by the Elma stepped potentiometer and Lundahl LL1517 output balancing transformer of the MP1+.

The signal paths in both preamps follow the same route. From the selected input, the signal travels to the DOA gain stage, the output level of which is set by the front-panel input gain control. From there, the signal passes through the Colour module (if active) and then, via the output trim, to the balanced output, which is electronically balanced via Burr-Brown chips in the MP1 and, as mentioned, transformer-balanced in the MP1+. On both units, the five-LED VU meter is intended primarily as a visual guide, and has to that end been given a response said to be “somewhere between VU and Peak”.

The MP1’s input gain range is a continuous +5 to +65 dB, whilst that of the MP1+ is 0 to +60 dB in 21 stepped increments. On both units, the mic/line input impedance is 4.8kΩ, whereas the instrument input has an active impedance topology. The benefit of this is that the impedance is, in essence, almost infinite, so any instrumental source, up to and including a piezo acoustic pickup, can be connected directly without the need for an external preamplifier to extract maximum performance. The one downside is that if nothing is connected to the instrument input when it is active, it creates noise at the MP1/MP1+ output.

I don’t own the test equipment necessary to measure and confirm these very impressive specifications, but I can certainly say that both these preamps are superb, delivering a clean, natural and superbly detailed performance that belies their relatively modest price tags. Indeed, depending on your taste, you might find the MP1’s level of clarity (assuming no Colour module is fitted) slightly too clinical — and if that’s the case, it could make the slightly richer and warmer-sounding, transformer-balanced MP1+ more attractive.

Although I tend towards mic preamplifiers with definite character, the level of detail delivered by the MP1 and the MP1+, coupled with their low noise floors and tonal neutrality, means that the sonic characteristics of the microphones and instruments plugged into them become clearly audible, offering you the opportunity to match microphone and source — or not, as your inspiration takes you.

But so far I’ve been commenting on the performance of these preamps when used in isolation — and what really sets them apart from the crowd is their ability to host Colour modules; as the name implies, these modules enable you to add as much sonic ‘colour’ as you want. In fact, the neutral nature that is such a feature of both the MP1 and MP1+ makes them ideal as Colour hosts, and to get you started, both ship with the Discrete Saturation module (designed and manufactured in the UK) from Bart HRK, which is designed to add the coloration of a “vintage recording console.” Its Class-A signal path contains new old stock (NOS) 1960s germanium transistors from East Germany, NOS USA-made Motorola silicon transistors, and a combination of germanium and silicon diodes. In use, the circuit is designed to behave in a similar way to a diode-bridge compressor, such as those developed by Neve in the 1960s, fattening the signal at low and medium drive settings and moving into audible distortion as drive levels increase and the module begins to clip. 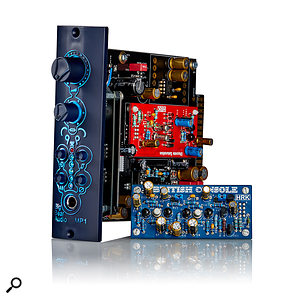 Here you can see the MP1 (the transformer-balanced MP1+ version is pictured in this article’s main image) with the included Discrete Saturation Colour module fitted, and beneath this, the separately available British Console module that’s mentioned in the review.In operation, the preamp’s entire input signal is switched to run through the fitted Colour module. The input gain thus determines how hard that module is ‘driven’, and the output attenuator is used, if necessary, to optimise the level being passed to the next link in the signal chain. This arrangement works perfectly, with the hard bypass offered by the Colour in/out button enabling you to audition the effect of the module easily.

As you might expect, both the MP1 and MP1+ performed superbly as hosts not only for the Discrete Saturation but also for the other Colour modules that Big Bear sent for audition with the preamps. These included Bart HRK’s British Console, which offers the sound of a “classic British mic preamp”, Eisen Audio’s TM79 analogue multi-stage, transformer-based saturation module, designed to produce “that 1970s tone”, and Louder Than Liftoff’s Mass Drivr, whose 2520-style Rogue Six discrete op-amp and transformer aim to recreate the sonic effect of a 1970s API console.

I hadn’t encountered the Discrete Saturation module until it turned up for this review, and I have to say that I was impressed. Its relatively high threshold before clipping allowed me to drive it somewhat harder than I might have expected to without any distortion becoming audible. Below that threshold, the a compression-like effect progressively reduced the higher frequencies, increasing emphasis on the mid-range and, as a result, adding more body and girth to the sound overall. At lower drive levels, its effect can be quite subtle, which could potentially give a pair of these modules in the stepped-control MP1+ a role in mastering, as well as in recording and mixing.

I found there were interesting comparisons to be made between how the MP1 and MP1+ sounded with the different Colour modules. In general, I ended up slightly preferring the MP1 with transformer-equipped modules and the MP1+ with non-transformer modules, but this is probably more a reflection of my personal tastes than any technical limitation in either preamp; they’re both great and I could quite happily live with either of them.

Both the Big Bear Audio MP1 and MP1+ are, by any standards, superb microphone preamplifiers. Their extremely high level of audio performance, both in technical terms and in the subjective quality of the sound that they produce, makes them superb value for money. Add into that equation their ability to host Colour modules and these Big Bear Audio preamps grant you access to an ever-increasing range of sonic possibilities.

It’s very encouraging to see a young British design engineer running his own design and manufacturing company in the UK, and delivering studio recording equipment of the high quality found in the Big Bear Audio MP1 and MP1+. Whether you’re in need of a high-quality 500-series mic preamp or are looking to start exploring the DIYRE Colour universe, these Big Bear Audio devices should be on your audition list. Both are extremely impressive and more than deserving of your attention.

I couldn’t find anything directly comparable with either the MP1 or the MP1+, but in a similar vein there’s Louder Than Liftoff’s Chroma, which pairs their twin-tone amplifier architecture with a Colour slot in a 500-series chassis. Slightly more affordable options include DIYRE’s CP5 and either of Bart HRK’s two microphone preamplifiers with twin Colour slots.

Big Bear Audio have produced two superb-sounding 500-series mic preamps whose extremely high level of audio performance is further enhanced by their compatibility with the DIYRE Colour format, to open up an ever-increasing range of sonic possibilities for recording, mixing and mastering.