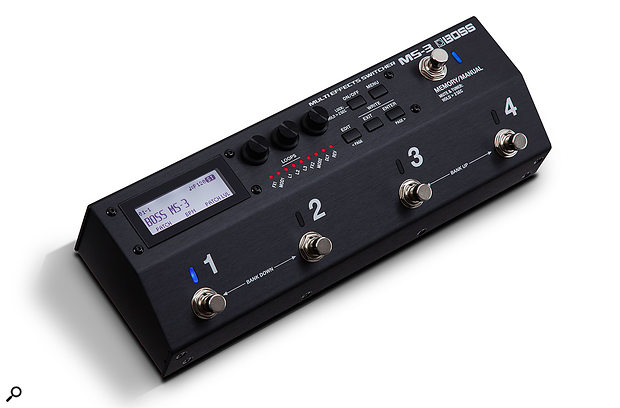 Boss’ latest guitar-friendly floor unit combines the convenience of a multi-effects box with the ability to use your own pedals.

Despite the number of do-it-all programmable guitar effects units on the market, many guitar players still prefer to go down the separate pedal route, picking and mixing what works for them. However, a large collection of pedals can be difficult to control and all that cabling and extra capacitance can compromise your basic tone — which is why certain companies, such as GigRig, developed programmable pedal-switching systems. What Boss have done with the MS-3 is to combine the appeal of a programmable ‘three-loop’ pedal switcher with the convenience of digital multi-effects. After all, there are many effects or effect combinations that you might need for only one or two songs, so it makes sense to combine the separate pedals you rely upon with a programmable multi-effects box. The MS-3 is by no means the only effects unit to include individual loop switching, but it has the most pedalboard-friendly footprint of the ones I’ve seen.

The top panel of the MS-3 is where you’ll find the programming controls and the footswitches. The connection jacks for the inputs, outputs, loops and additional controllers reside on the rear panel, along with a PSU input that takes the included power adaptor. Five footswitches, three knobs and five buttons are all that’s needed for control, and a set of LEDs shows you which loops are active. A further row of LEDs shows which effects sections and loops are active. The monochrome LCD is fairly small but the patch number is large enough to see when playing.

In addition to being able to host three of your own pedals, the MS-3 can also store and send MIDI Program Change, tempo and CC commands so that any pedals you have that are MIDI controllable can be incorporated into a user patch along with the individual loop in/out switching and the onboard effects configuration. The MS-3 can also handle amp channel switching. Up to six internal pedal-style digital effects can be used at once, along with your three external pedals, and different patches can be set to have mono or stereo outputs. In a typical setup, you’d probably connect one pedal to each of the three loops, though there’s no reason not to have two pedals in series sharing the same loop if you tend to use them together.

Some vintage fuzz boxes that use germanium transistors don’t like to follow a buffered input, but there’s no reason not to put them before the MS-3. At its simplest then, the MS-3 adds those ’needed on occasions’ effects to your ‘must have’ pedals, but because of its amp-switching and MIDI capability, it can also work as a comprehensive rig controller.

There are 112 built-in effects suitable for guitar and bass, including tuner, noise gate, delays, reverbs, modulations, pitch-shifting, compressors, slicers, Boss’s famous Slow Gear and so on, plus a selection of overdrives and distortions. Patch creation is possible using the front-panel controls and LCD window, and up to 200 user patches can be stored, but if you have a computer with a USB connection, patch editing and backup is much easier using the free Mac and Windows MS-3 Editor/Librarian software.

The four main footswitches operate differently in the two main modes, Memory and Manual, selected using the fifth footswitch. In Memory mode, the four footswitches access banks and patches, while Manual lets you switch loops and effects on or off within a patch. Dual-colour red/blue LEDs show which mode you are in. Pressing the two leftmost pedals together moves down a bank and pressing the two rightmost ones moves up.

Additional jacks allow the connection of optional footswitches to use as tap-tempo or expression pedal inputs, while control out jacks are used for switching amp channels or controlling effects that have an external switching input.

The MS-3 caters for up to three effects send/return loops, as well as two tap-tempo or expression pedals, and a control output for amp channel switching.

The key to making the best use of the MS-3 is to first make notes of what you need each patch to do, then (ideally using the software editor, which is refreshingly intuitive) set up what you need in a logical order for ease of access during performance. External pedals should be left permanently active as the loops switch them in and out as needed. You can insert your block of three loops at any point in the digital effects signal chain, and you can re-order all the digital effects, but you can’t change the order of the pedals in the loops and you can’t put the onboard effects between two of your own pedals. A typical setup might be to put a phaser or Univibe type of effect first, then loop through your drive pedals, then go into the other Boss multi-effects. There’s also the ‘four cable’ method of connecting to an amplifier using the loop ins and outs in a way that allows you to split your chain so that some effects are placed before the preamp and others are placed in the amp’s effects loop. There’s also the option to assign what Boss call a ‘Current Number’ when in Patch Mode, so that you can still turn something on or off after you have changed patch.

As we’ve come to expect from Boss, the general quality of effects is very high, and they include some excellent emulations of classic Boss pedals, while the clean signal path and silent switching does a good job of preserving the original guitar tone. In fact the only real disappointment for me was the pitch-shifter, which sounded too lumpy to use as a 12-string emulator. Those with more subtle tastes may also prefer the sound of the their own analogue overdrive pedals, which can be connected via the loops, but unless you’re being very subtle, the onboard drives are surprisingly good, with Crunch delivering a nicely on-the-edge AC30-style sound. The delays, modulations and reverbs are also good enough that you won’t need to invest in separate pedals for those functions unless you have very specialised tastes, and all those other ‘used once or twice in a set’ effects can be programmed in as needed.

Given that the MS-3 is around the same price as two or three good-quality conventional pedals, it offers exceptional value and could make live performance or studio session work a lot easier to manage.

Most multi-effects floor units don’t incorporate loop switching, while most loop-switching systems don’t include any processing — but there are some exceptions, notably the Line 6 Helix.

The MS-3 can be used on a number of levels, from stand-alone effects unit to full-on guitar rig controller. Setting up using the free software is highly recommended.