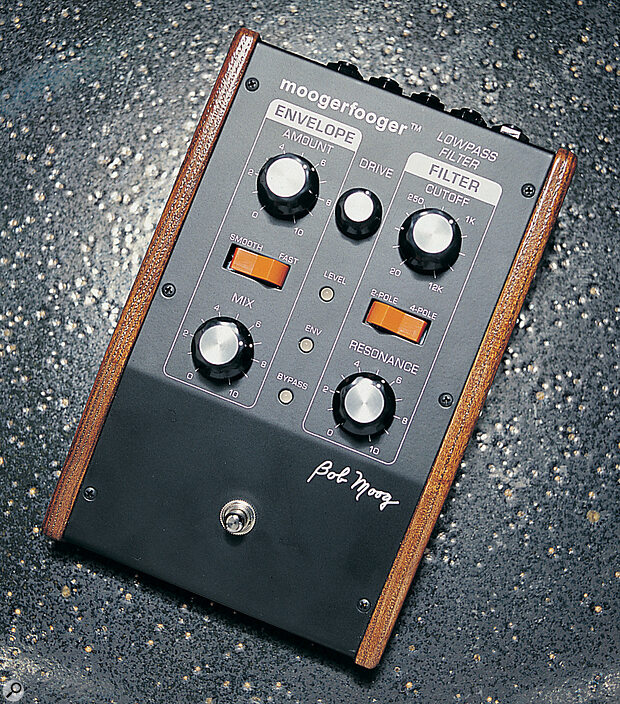 Bob Moog's analogue filter in a pedal certainly has the vintage look — but does it capture that vintage Moog sound? Paul White does the stomp and finds out.

The latest products from Bob Moog's company Big Briar are the catchily named Moogerfooger pedals. The first, under review here, is a resonant low‑pass filter, of the type you'd find in an analogue synth, combined with an envelope follower that allows the amplitude of the input signal to control the filter's cutoff frequency. It can be used with most harmonically rich audio sources, but will probably be most popular with musicians trying to squeeze techno‑type sounds out of synths not equipped with filters.

The Low‑Pass Filter has a Minimoog‑styled control panel and hardwood end‑cheeks, but its all‑analogue filter circuit isn't based on the Minimoog. It's packaged in a stomp‑box format and has four external pedal input jacks that can be used to control Cutoff, Mix, Resonance and filter Amount, plus an envelope output‑voltage jack. The only foot control on the box itself is a momentary‑action bypass switch: the audio signal still passes through a VCA in the bypass position, to ensure that switching is glitch‑free, and since the Drive control affects the bypass signal level, the unit must be powered up in order for there to be an output. Power comes from an external adaptor, and the audio ins and outs (mono) are on unbalanced jacks.

The controls comprise Envelope Amount, Filter Cutoff and Resonance, plus the aforementioned Drive control to optimise the input‑gain setting, and a Mix control to blend the filtered and unfiltered sounds. Fast or Smooth envelope response and 2‑pole or 4‑pole filter operation are available, with the 2‑pole setting (12dB/octave response) giving a fairly bright sound, and the 4‑pole setting (24dB/octave characteristic) yielding a warmer, darker sound.

The Drive control is linked to a dual‑element LED capable of displaying green, red or yellow. Normally, Drive should be adjusted to give a yellow reading, but if you want to add a little audible distortion you can carry on into the red. Two further LEDs show envelope‑follower activity and bypass status.

I tested the filter using my Yamaha SY35, which is a nice enough synth but has no resonant filter. It's important to choose a harmonically rich sound as the source — sawtooth, square or pulse waves work best for basic analogue emulations.

The starting point of the filter is determined by the Cutoff setting and the sweep range by the Envelope Amount setting. With the envelope follower set to Fast, the filter frequency sweeps upwards very quickly as soon as a fast‑attack sound is fed in. Using the Smooth envelope‑follower setting, by contrast, creates an audible upwards sweep at the start of a note. At higher resonance settings the filter produces the distinctive 'zwee' sound, while turning it right up puts it into self‑oscillation.

An envelope‑triggered filter like this one will never behave in quite the same way as the keyboard‑triggered filter in a typical synth. The most obvious difference is that an envelope follower can't distinguish between different notes, so unless you play monophonically, the filter sweep won't necessarily retrigger for each new note. There's a strong case for a MIDI In on a device such as this one, so that the filter can be retriggered from MIDI Note Ons.

The other major difference between envelope‑triggered and keyboard‑triggered filters is that an envelope follower will track undulations in the input envelope caused by tremolo or by the beating of two slightly detuned oscillators. The filter sweep can thus take on a rather unstable quality, especially when a wide sweep range is used with a fast filter response. This aside, the filter has a nice character to it, and there's a useful difference between the 2‑pole and 4‑pole settings.

If you need a simple‑to‑use filter for the processing of mainly monophonic synth lines, this unit will do the job nicely. If, on the other hand, you want a filter that does a little more (albeit a little less predictably, sometimes), check out the FAT Resinator (reviewed in SOS March 1998), which sells for about the same and, in my view, is more flexible and generally more fun.

A nice‑sounding, simple‑to‑use filter with classic styling. Everything works perfectly within the usual limitations of an envelope‑following control system.