Be careful you don't misread the title: BollyHood Beats has an 'H' in the middle, which is actually key to the content. And while the library does include a lot of Indian percussion, this has been combined with some distinctly non‑Bollywood hip‑hop and R&B drums. Can this touch of eastern promise take your urban‑based music to another level, is BollyHood Beats a good investment? Well, there's certainly plenty of material (nearly 4GB), and while this includes pre‑mixed loops based on individual loops in the collection, it still represents excellent value for money. All the loops come in 24‑bit, 44.1kHz format, with a mixture of mono and stereo used, depending on the mic/instrument combination used. Many of the loops are eight bars long and therefore allow for some subtle variations in the playing. In total, there are 92 construction kits, with original recording tempos ranging from 57 to 110 bpm. 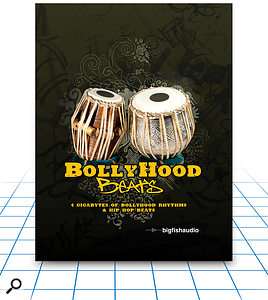 The format of each kit is similar, with a single drum‑kit loop being supported by a small number of Indian percussion loops (generally between five and 10 in each kit). The drum loops themselves are excellent: they combine both acoustic and electronic drums, along with the occasional bit of scratching, and both the sounds used and the style of playing would slot right into contemporary R&B or hip‑hop productions. That said, stylistically, these are pretty serious beats that would work better at the darker ends of these genres, and rather less so for those who like their R&B with a dollop of hearts and flowers romance! The Indian flavour is added via the usual suspects such as dholak, tabla, manjira (hand cymbals), ghungroo (small bells) and duff (a large frame drum producing a low, ringing sound if left un‑damped by the player). Listened to in isolation, the performances are simpler than might be the case for traditional playing, but this is clearly intended to make them work in tandem with the main drum loop — and the end result is very effective indeed.

Each construction kit includes three pre‑mixed loops: a 'full mix' (useful for auditioning) and two different 'percussion' mixes. The first of these contains all the Indian percussion pre‑mixed, and can be easily layered with the main drum loop, and their relative levels balanced to taste. The second pre‑mixed percussion loop is identical to the first but excludes the duff. This is useful, as the duff essentially doubles the kick‑drum pattern, and although it sounds great, its ringing tone (one of the elements that gives the loops a somewhat ominous sound) won't suit every production. The consistency of the sound between the various construction kits makes it easy to mix and match to build up more complex song‑style structures. Aside from my earlier observations about the narrowness of the stylistic range, BollyHood Beats is top notch. John Walden