No prizes for guessing that Acid Jazz City 2 is a follow‑up to Big Fish Audio's original 'part 1' of the same name, and for those familiar with the earlier release the format and content will represent familiar territory. This library provides 1.4GB of loops arranged into 30 construction kits. The original tempos of the recordings fall predominantly within the 90‑100bpm range, resulting in a distinctively mellow vibe, and all material was recorded at 24‑bit, 44.1kHz resolution. 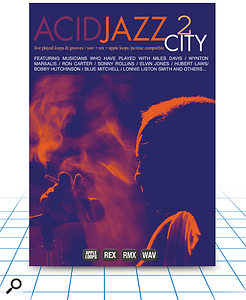 Acid Jazz might not be everyone's cup of tea, but when done well the combination of lazy, hypnotic rhythms, sleazy jazz instrumentation and some lo‑fi drum and turntable scratching can create a very cool 'jazz meets hip‑hop' sound. As a result, there's material here that certainly ought to appeal to both R'n'B and hip‑hop producers. Indeed, the content is perhaps a little dark in mood: think of the more hip‑hop influenced Thievery Corporation material — although I was also reminded of the Fun Loving Criminals in places, and I'm sure media composers looking for some urban cool to add to their 'Shaft meets LL Cool J' instrumental beds would find plenty to suit.

The individual construction kits are well stocked. In most cases there are 30-plus loops in a particular kit, which generally includes two or three drum loops (for some added variety) and a single bass loop, although some kits include both acoustic bass and synth bass. The drums are generally complemented by a series of conga (and occasional bongo) loops, but a hip‑hop feel is provided by a goodly number of turntable scratch loops, which are excellent. The rest of the loops are dominated by piano (both acoustic and electric) and various brass, with lots of lazy sax and trumpet melody lines complemented by the occasional horn section loop. A number of the kits also feature one or two adlib‑style vocal loops, and while useful to have, the content is perhaps a little predictable (deep and husky 'dig this' or 'yeah' anyone?). A few of the kits also include some flute loops, for those Mission Impossible TV series theme‑tune moments.

While I don't think Acid Jazz City 2 breaks new ground, it's difficult not to be impressed by what's provided. There's plenty of material, and, the few rather clichéd vocal samples aside, the performances are top‑notch. Perhaps the only other comment worth making is that the various construction kits occupy a fairly narrow stylistic range. This isn't necessarily a bad thing (it makes it easier to find two kits that would work together, should you need to build a more conventional song), but the dark tone might not suit everyone's needs. But what Acid Jazz City 2 does, it does very well. John Walden