Mixing urban‑based beats with wider musical influences is, pretty much, a cornerstone of the sampling ideal that helped hip-hop expand beyond its street origins. With Hip Hop Exotica 2, Big Fish Audio have aimed to provide "a cross‑cultural blend of hip-hop gangsta beats and world music flavors”. 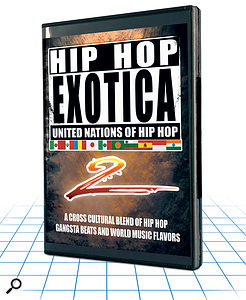 The library contains 36 construction kits, totalling 1.7GB of content, supplied in four formats: WAV, REX, Apple Loops and RMX. As ever, each kit is clearly labelled with both key and tempo information. Tempos range from a leisurely 75 to a more up-front (for hip-hop, at least) 104 bpm.

It's the more unusual sounds that stand out in the included construction kits. There's a very nice line in sitar, shamisen and koto loops, which suit the urban vibe very well, and the oud riffs are a real personal favourite. Some non‑stringed instruments also feature, including nice atmospheric flute riffs and tuned percussion. Many of these elements are quite heavily processed, with lots of delay and thick washes of reverb added, and it would have been nice to have access to the riffs and loops both dry and effected.

One thing I found slightly puzzling was the amount of synth‑based elements included, in fact a surprising number of kits contain no real 'exotic' or acoustic loops at all. This is a touch odd, given the library's brief. That said, the majority of the synth content is actually very good and has been well programmed to have an atmospheric, almost Far Eastern vibe, which fits in well with the other loops.

The only real disappointment was in the overall quality of the beats. Although nothing here is short of solid, by the same token, nothing really shines. There's a slightly pedestrian quality to some of the rhythm programming, and a tendency to over-clutter the beat with unnecessary, heavily effected percussion loops. Some of the drum sounds are equally disappointing and really lack the oomph needed to drive things along. On the plus side, however, is the inclusion of a drum tracks folder for each kit, which contains the beat broken down into individual tracks. This allows plenty of flexibility in 'remixing' the beats to your own personal taste, as well as construction builds and breakdowns.

On the whole, I found Hip Hop Exotica 2 slightly frustrating. When it gets it right — with the atmospheric, unusual instrument riffs and other‑worldly, Arabic‑sounding synths, for example — it really hits the mark. But these highlights are not mirrored by some of the slightly uninspired programming and beat‑work. That said, if you're looking for some unusual, world‑spanning spice to sprinkle over your urban rhythms, this collection could be well worth a look. Oli Bell