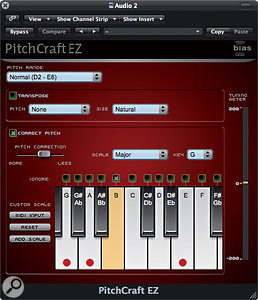 PitchCraft EZ is a spin‑off from the more fully featured PitchCraft plug‑in included with BIAS's Master Perfection Suite and Peak Pro XT. It is designed to provide an easy‑to‑use means of correcting pitch in real time, and also of generating special effects such as pitch quantising, transposition and voice changing. Though designed primarily for vocals, it can handle many monophonic sounds, from fretless bass and slide guitar to bowed‑string instruments. It is compatible with Mac OS and Windows, and supports all the common plug‑in formats: VST, Audio Units and RTAS/AudioSuite.

PitchCraft EZ is based on the original PitchCraft algorithms but is streamlined for ease of use, though the same pitch, transposition and formant-preservation algorithms used in the original are still present behind the scenes. What you don't get in this 'light' version is the ability to choose a tuning other than A=440Hz, which may be a limitation for some users.

The plug‑in window follows the paradigm established by Antares when they first unleashed Auto‑Tune on an unsuspecting world, where the pitch correction can be either chromatic or to the nearest note in a specific scale. A one‑octave keyboard display shows the 'allowable' notes in the selected scale. Using a chromatic scale means you don't have to know what key you're working in, but there's a chance that a badly pitched vocal will get nudged further towards the wrong note if the pitching is more than half a semitone out. Setting the appropriate scale generally avoids this, and presets provide a range of common scale types, but you can also toggle individual scale notes on or off by clicking on the keyboard display.

The Custom Scale section on the left includes a MIDI Input mode, which allows the scale notes to be played in over MIDI if the host software allows this. (In development at the time of writing is the neat facility to 'play' the melody from a MIDI keyboard, to make the vocal performance conform to the tune of a MIDI part.) To optimise how the pitch‑detection algorithm works, you can select from five pitch ranges: normal, female, male, lower register and upper register. Pitches falling outside the range (listed in the manual in both musical notes and frequencies) are not processed. You can also specify that certain notes be ignored (not processed), even if they fall inside the musical scale you're working in, using the tick boxes above the keyboard. This is useful, allowing you to tell PitchCraft EZ to process only specific notes in a performance, rather than treating all of them.

A slider adjusts the rate of pitch correction: very fast correction times produce the now‑familiar 'abused Auto‑Tune' robotic voice effect, while slower settings create a more natural‑sounding result. A vertical meter on the right shows the amount of pitch change being applied. Formant and overall pitch-transposition control is available independently, and careful use of the formant 'size' options can change the character of the voice to make it sound more male or more female. There's also enough formant range to get you well into special effects 'cartoon voice' territory, if you feel you must.

I tested PitchCraft EZ using my Mac Pro running Logic 9.1 under the Leopard operating system. Once Logic had scanned and approved of the plug‑in, it appeared in the menu of available plug‑ins and loaded with no fuss. If you want to use MIDI to set the scale notes when working in Logic, you need to insert PitchCraft EZ in an instrument track, and then route audio to it from the desired audio track using its side‑chain input.

PitchCraft EZ proved ideal for smoothly nudging errant vocals into pitch, but turned out to be equally adept at creating the effects pioneered by abusing existing systems, and does a great job in a very straightforward way. It also works fine on many monophonic instruments — even blues guitar solos can be tidied up if your note bending isn't as precise as you'd like. The controls are both intuitive and adequately flexible when it comes to setting scale types and the types of effect to be applied, and I like the option to bypass notes on which no processing is required. As long as the correction rate slider is on the slow side of centre, audible artifacts are largely avoided and natural pitch scoops and vibrato remain essentially unaffected. I'm not entirely convinced by formant‑shifting plug‑ins for creating natural‑sounding modified voices; a small amount of shift can be useful when you're layering backing vocals, but the modified voices always have a slightly artificial quality, and that gets more severe the further you move the voice from its natural character. The same is true of using the pitch‑shifting to do something like change notes in a melody — it works, but I'd prefer not to use it for serious applications, as only the very best (and most expensive) pitch and time manipulation software really stands up to scrutiny for this kind of thing.

If you're a Logic user, there's probably little advantage in using PitchCraft EZ instead of Logic's own included pitch corrector, as the results are similar, but if you don't already have automatic pitch‑correction tools, PitchCraft EZ will get the job done with the minimum of fuss. The only restriction I found was the inability to change the tuning centre from A=440Hz, so if you're trying to get vocals to match your grandma's old piano, you may be better off with the 'full fat' version of PitchCraft. You can't expect any automatic pitch‑correction plug‑in to rescue a truly dreadful vocal performance, but PitchCraft EZ does add a welcome polish to a good one, and is also very attractively priced.

If your DAW doesn't have built-in pitch correction, the most obvious rival for PitchCraft EZ is Antares' Auto‑Tune EFX, which is likewise a simplified version designed for ease of use. If you need something more precise that requires some off‑line work, Celemony's Melodyne is still the one to beat.

If you need a simple, affordable pitch‑correction plug‑in that works in real time, you may need to look no further than PitchCraft EZ.